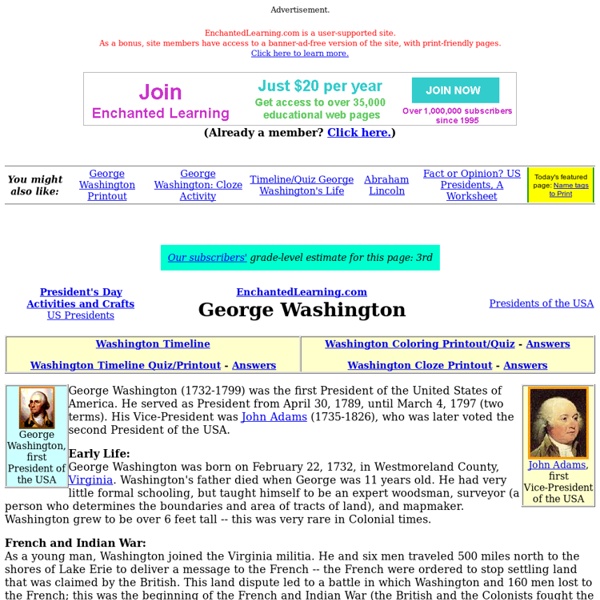 Advertisement. EnchantedLearning.com is a user-supported site. As a bonus, site members have access to a banner-ad-free version of the site, with print-friendly pages.Click here to learn more. (Already a member? George Washington (1732-1799) was the first President of the United States of America. Early Life: George Washington was born on February 22, 1732, in Westmoreland County, Virginia. French and Indian War: As a young man, Washington joined the Virginia militia. Marriage: Washington married Martha Custis (born June 2, 1731 - died May 22, 1802) in 1759. A Start in Politics: In 1758, Washington was elected to the House of Burgesses in Virginia (the local governing body of Virginia). Revolutionary War: In order to pay for the expensive French and Indian War, the British taxed the Colonists (the Stamp Tax), angering them. In 1775, Washington was chosen as the Commander in Chief of the Continental Army. Washington wore false teeth made from hippopotamus ivory. Related Pages: Related:  Wax Museum • Heroic People • 2nd grade President Report

Thomas Jefferson Thomas Jefferson was born in Albemarle County, Virginia in 1743. His father owned a 5,000 acre plantation. After graduating from the William and Mary College, Williamsburg, he became a lawyer. A member of the Revolutionary Party, Jefferson was elected to the Virginia House of Burgesses, in 1769. Jefferson served as Governor of Virginia (1779-81) and as a member of the Continental Congress (1783-84). George Washington was unanimously elected as the first President of the United States and was inaugurated on 30th April, 1789, in New York City. Washington was unanimously reelected in 1792 but by this time the government was not so united and there were serious disagreements between Jefferson's Democratic Republicans and Hamilton's Federalists. Although Adams was the leader of the Federalists, he rejected the suggestions of Alexander Hamilton to declare war on France. In the 1800 presidential election Jefferson defeated John Adams.

Abraham Lincoln Advertisement. EnchantedLearning.com is a user-supported site. As a bonus, site members have access to a banner-ad-free version of the site, with print-friendly pages.Click here to learn more. (Already a member? Click here.) Abraham Lincoln (February 12, 1809- April 15, 1865) was the 16th President of the United States of America. Abraham Lincoln was born in a log cabin near Hodgenville, Kentucky. Lincoln was elected President in 1860. On Jan. 1, 1863, Lincoln issued the Emancipation Proclamation, which eventually led to the freeing of all slaves in the USA. Lincoln was re-elected President in 1864 (defeating Democrat George B. General Robert E. President Lincoln was shot on April 14, 1865, by John Wilkes Booth (an actor). Related Pages:

Abraham Lincoln's Crossroads About the Exhibit: Abraham Lincoln’s Crossroads is an educational game based on the traveling exhibition Lincoln: The Constitution & the Civil War, which debuted at the National Constitution Center in June 2005. The online game is intended for advanced middle- and high-school students. It invites them to learn about Lincoln’s leadership by exploring the political choices he made.

Clara Barton for Kids Biography Clara Bartonby Unknown Occupation: Nurse Born: December 25, 1821 in North Oxford, Massachusetts Died: April 12, 1912 in Glen Echo, Maryland Best known for: Founder of the American Red CrossBiography: Where did Clara Barton grow up? Clara was born Clarissa Harlowe Barton on Christmas Day in 1821 in Oxford, Massachusetts. Her father, Captain Stephen Barton, was a veteran of the Indian Wars and owned a farm. Clara grew up the youngest of five children. Growing up on a farm Clara learned about hard work. Her Brother Gets Hurt When Clara was eleven years old, her brother David fell off the roof of a barn. Working as a Teacher At the young age of seventeen, Clara began to work as a schoolteacher teaching summer school. Eventually Clara decided to get a degree in education. Fighting for Women's Rights Clara moved to Washington D.C. and went to work for the patent office. The Civil War Begins Near the start of the Civil War a number of wounded soldiers arrived in Washington D.C.

Biography of President George Washington for Kids Biographies for Kids >> US Presidents for Kids Portrait of George WashingtonSource: Library of Congress George Washington was the First President of the United States. Served as President: 1789-1797Vice President: John AdamsParty: FederalistAge at inauguration: 57 Born: February 22, 1732 in Westmoreland County, Virginia Died: December 14, 1799 in Mount Vernon, Virginia Married: Martha Dandridge WashingtonChildren: none (2 stepchildren)Nickname: Father of His Country Biography: What is George Washington most known for? One of the most popular Presidents of the United States, George Washington is known for leading the Continental Army in victory over the British in the American Revolution. Crossing the Delaware by Emanuel Leutze Growing Up George grew up in Colonial Virginia. When George turned 16 he went to work as a surveyor, where he took measurements of new lands, mapping them out in detail. Before the Revolution The American Revolution and Leading the Army Washington's Presidency How did he die?

Internet History Sourcebooks Update Information 2006: In 2006 the Internet Medieval Sourcebooks and associated sourcebooks are undergoing a major overhaul to remove bad links and add more documents. 1. This project is both very large and fairly old in Internet terms. 2. 3. The Internet Medieval Sourcebook is organized as three main index pages, with a number of supplementary documents. INTRODUCTION: MEDIEVAL SOURCES ON THE INTERNET Historians teaching medieval history surveys almost always want to combine a textbook, a sourcebook, and additional readings. GOAL: The goal here then has been to construct an Internet Medieval Sourcebook from available public domain and copy-permitted texts. DOCUMENT SIZE: The size of documents for teaching purposes is an issue. TEXTS Since these texts come from a variety of printed materials, translators, and sources, they will vary in quality. USAGE: This Sourcebook is specifically designed for teachers to use in teaching. By pointing students to this web site. Patrick J.

WELCOME TO USA 4 KIDS - Presidents of The United States - Thomas Jefferson 3rd President Thomas Jefferson, the third President of USA, was the third of eight siblings in Virginia. Jane Randolph was his mother who came from a family of high social standing. Her father, Isham Randolph was the captain of a ship and a planter. The father of Thomas Jefferson was Peter Jefferson who was a planter as well as surveyor. His ancestors were of English origin. At the age of nine Thomas started going to a neighbouring school that was run by a Scottish minister. When 16, Thomas joined The College of William and Mary and graduated with high laurels in 1762. Playing the violin was another hobby of Thomas. Thomas Jefferson married Martha Wayles Skelton Jefferson – a widow. Thomas Jefferson was tall with freckles and sandy hair. Jefferson followed Benjamin Franklin to be minister in France in 1785. He retired to his home in Monticello to mull over great designs of setting up a University in Virginia in 1819.