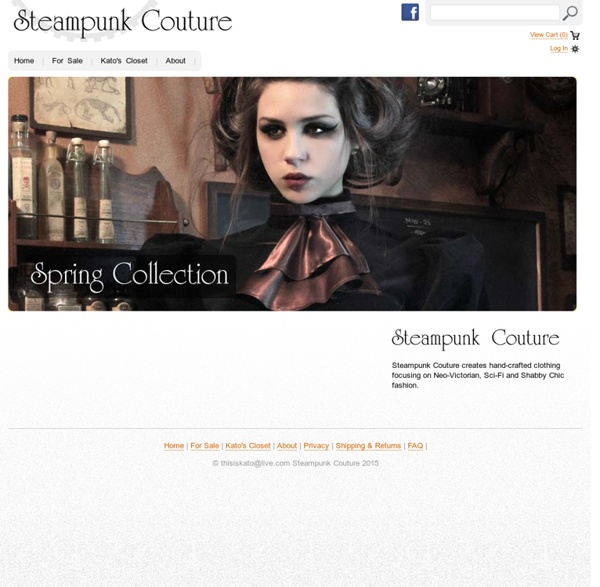 San Diego Automotive Museum San Diego Automotive Museum Presents… Steampunk – the Automotive Museum’s version of the literary and artistic genre. The Museum has collaborated with local artists, Starburner Galactic Courier Service, to interpret this growing art form through automotive design and technology. Several vehicles built in Steampunk style will be on exhibit including a few of the Museum’s own vehicles modified in the Steampunk genre by our local ‘makers’. In addition, numerous art objects will be on view from clothing and everyday functional pieces, to graphic art and the music of the genre.

Steampunk Fashion This afternoon I finished reworking the shoulder strap to my first Sam Brown belt-rig. This was the one I made for the Steampunk Indiana Jones outfit - and kept re-using for several other outfits as I came up with them. A few months ago I bought a new reproduction 1911 US Army issue belt and flap-closure holster from Sportsman's Guide Catalog for any WWI, WWII, or Indiana Jones outfits. So I felt free to re-mod my original belt-rig with a longer shoulder strap that featured more accurate "dog leash" clips to hook the strap up to the belt.

leather watchstrap I read an article recently about the demise of watches. It seems most folks these days don’t wear them, preferring instead to constantly pull their phones out of their pockets. Sure, it’s one less accessory to deal with, but I can’t imagine going a day without a watch on my wrist. So, as a great excuse to buy a new watch, I figured I should do a little DIY for a leather strap. Timex has released the Weekender model, and it’s a simple, classic, timeless look with easily modified pass-through straps. In Progress - Girandoni air rifles and Girandoni style air guns - A major research study. Austrian Large Bore Airguns Girandoni style air rifles and pistols - preliminary research presentation.

Steam Punk "Imagine it... The Victorian Age accelerated. Starships and missiles, fueled by coal and driven by steam. Leaving history devastated in its wake." Retro-style Speculative Fiction set in periods where steam power is king. Very often this will be in an Alternate Universe where the internal combustion engine never displaced the steam engine, and as a result all manner of cool steam-driven technologies have emerged, ranging from Airships to submarines; the plausible counterpart to Magitek, with a Hollywood ScienceHand Wave or The Spark of Genius.

Russian Artist Creates Steampunk Animals From Old Car Parts, Watches And Electronics When working with metal, it takes a true master to breathe life into their artwork. Russian artist Igor Verniy does just that with his beautiful and elegant articulated steampunk animal sculptures. Their moving parts and Verniy’s attention to detail makes them come alive. A lot of work goes on behind the scenes before Verniy creates his artwork. Steampunk Leather Top Hat Tutorial I have received several requests for a tutorial on making my steampunk leather top hat, shown above, and so, here it is. The first drawing shows the three pattern pieces (not to scale). The wave on the bottom of the crown is what gives the brim its distinctive curve. The pattern below is the one that I used to make my top hat. For a size large, the width of the crown (from side to side) should measure 23.8".

Plasma Display Steampunk Because it's been 30 years since I studied electronics I took the easy way out, I just used the whole circut board from the TV chassis. I cut off the leads to the vertical and horz magnet drivers, and the heater in the tube, this left me with a single board which had the coveted flyback, I also cut off the tuner section of the board because it stuck out another 3' To be simple I cut every wire to the tube, the large single wire to the side of the tube is what you want to use, if you didn't know that, then don't start this project. Pay attention! TV Tubes store their voltages for quite a while, days, weeks, months, so when you disconnect the flyback wire from the side of the tube treat it as if it is on running at full voltage, I grounded mine with a pair of gloves and a screw driver connected to the TV ground, then I put tape over the hole on the side of the tube so as to not acidently discharge it into me.