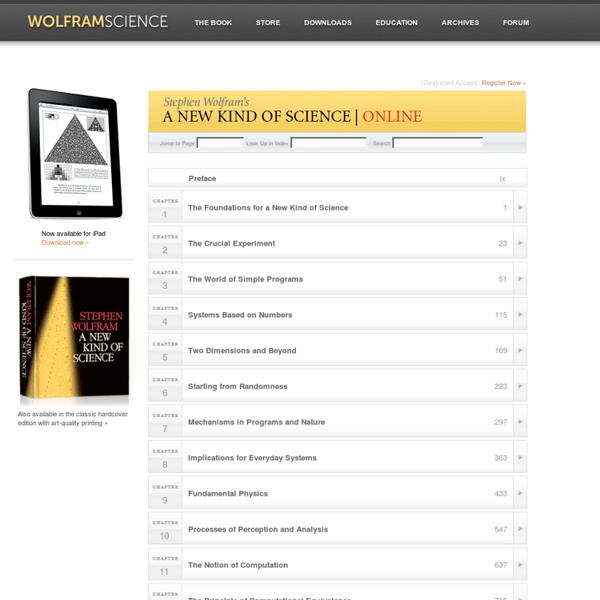 The Secret Rose Garden Index Sacred Texts Islam Buy this Book on Kindle Contents Start Reading Page Index Text [Zipped] Top 10 Most Influential Scientists - Top 10 Lists Humans This is part one of what will be a two part series on the most influential scientists in history. While these are not technically the “greatest” scientists, there is bound to be some overlap as the contributions that many of these men and women made to science are among the most important. Be sure to tell us who you think should be on the future list – we already have our second ten, but it might lead to a third or fourth. Marie Curie Circuit Simulator Applet This is an electronic circuit simulator. When the applet starts up you will see an animated schematic of a simple LRC circuit. The green color indicates positive voltage. The gray color indicates ground.

47 Mind-Blowing Psychology-Proven Facts You Should Know About Yourself I’ve decided to start a series called 100 Things You Should Know about People. As in: 100 things you should know if you are going to design an effective and persuasive website, web application or software application. Or maybe just 100 things that everyone should know about humans! The Rebel (book) Vintage International's 1991 reissue of Anthony Bower's translation of The Rebel. The Rebel (French title: L'Homme révolté) is a 1951 book-length essay by Albert Camus, which treats both the metaphysical and the historical development of rebellion and revolution in societies, especially Western Europe. Camus relates writers and artists as diverse as Epicurus and Lucretius, Marquis de Sade, Georg Wilhelm Friedrich Hegel, Fyodor Dostoyevsky, Friedrich Nietzsche, Max Stirner, André Breton, and others in an integrated, historical portrait of man in revolt. Examining both rebellion and revolt, which may be seen as the same phenomenon in personal and social frames, Camus examines several 'countercultural' figures and movements from the history of Western thought and art, noting the importance of each in the overall development of revolutionary thought and philosophy. One of Camus' primary arguments in The Rebel concerns the motivation for rebellion and revolution.

A Sense of Scale By Glenn Elert Posted 01.08.08 NOVA At roughly minus 460°F, absolute zero is abysmally cold, yet at least we can imagine it. Being only a few hundred degrees below zero, it's in the realm of something we can put our minds around. This is not true of the opposite of absolute zero, the theoretical highest possible temperature. In conventional physics, this is approximately 100 million million million million million degrees. In this interactive, get a taste of temperatures from absolute zero to absolute hot, and see why, for instance, even the core of the sun is relatively "chilly" compared to what many physicists believe the temperature of the universe was an instant after the Big Bang.

Hammack Home This book is an introduction to the standard methods of proving mathematical theorems. It has been approved by the American Institute of Mathematics' Open Textbook Initiative. Also see the Mathematical Association of America Math DL review (of the 1st edition), and the Amazon reviews. The second edition is identical to the first edition, except some mistakes have been corrected, new exercises have been added, and Chapter 13 has been extended. (The Cantor-Bernstein-Schröeder theorem has been added.)

The Soul of Man The Project Gutenberg EBook of The Soul of Man, by Oscar Wilde (#14 in our series by Oscar Wilde) Copyright laws are changing all over the world. Be sure to check the copyright laws for your country before downloading or redistributing this or any other Project Gutenberg eBook. This header should be the first thing seen when viewing this Project Gutenberg file. Electric fish diverging Carl Hopkins Although these fish look alike and have the same DNA genetic makeup, they have very different electrical signals and will only mate with fish that produce the same signals. Cornell researchers believe that these different electrical signals are the fishes' first step in diverging into separate species. Avoiding quicksand along the banks of the Ivindo River in Gabon, Cornell neurobiologists armed with oscilloscopes search for shapes and patterns of electricity created by fish in the water. They know from their previous research that the various groups of local electric fish have different DNA, different communication patterns and won't mate with each other.