How to See in Value 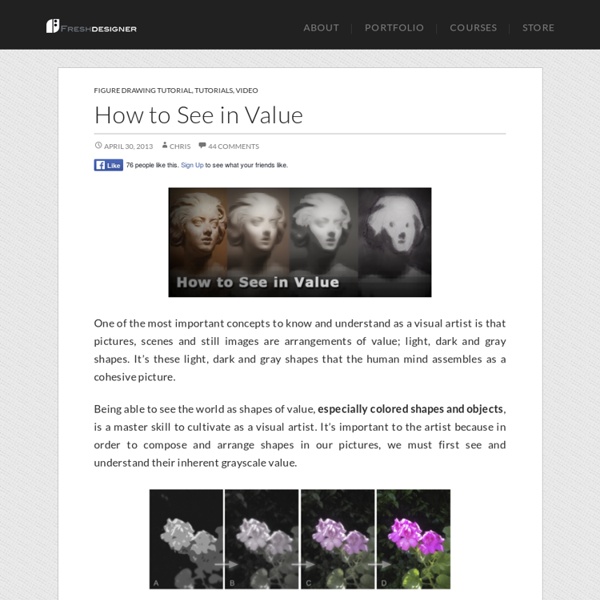 One of the most important concepts to know and understand as a visual artist is that pictures, scenes and still images are arrangements of value; light, dark and gray shapes. It’s these light, dark and gray shapes that the human mind assembles as a cohesive picture. Being able to see the world as shapes of value, especially colored shapes and objects, is a master skill to cultivate as a visual artist. It’s important to the artist because in order to compose and arrange shapes in our pictures, we must first see and understand their inherent grayscale value. The most basic and abstract pattern of dark and light shapes (A) is the first ‘read’ the mind makes. How do we train our eyes to see the world in value? To see these strategies in action, watch the video below or continue reading for the in-depth breakdown. Step 1: Ignore color information One way to see color as value is to simply ignore the color. Here is a Photoshop simulation of what I see when I squint at a scene: Example 1: Portrait

The Technique Trap Email A perceptive (and talented) art student by the name of Chris Campbell recently asked me this impressive question: “What do the animation industry pros say about us when we’re not around?” He elaborated… “Have they noticed any common mistakes or bad habits in current student portfolios?” “What do most pros think we need to work on?” Obviously, I can’t speak for everyone. But… …there is, in fact, one general criticism that comes up pretty much every time I discuss current student work with animation industry artists. Just this past week, I had three different conversations with three different artists and they brought it up every time the topic of student work came up. It isn’t going to be easy to hear. But because I love you, I have to share it with you… For many aspiring concept artists, the answer to this question could be the most important critique you’ve ever been given. Except Maybe You… What I’m about to share with you is a generalization. Generalizations are, by definition, inaccurate.

The Uncanny Valley Most people have heard of "The Uncanny Valley" by now. I've heard people refer to it in two contexts in the animation industry: characters that are almost lifelike but are just enough off to be creepy, and stylized/cartoon characters who have an off-putting amount of realistic detail. I want to talk a little about the second one because I've run into it more often recently when artists have asked me for critiques. I don't think there is a hard and fast rule for this type of uncanny valley. When I watched The Adventures of Tintin, at first I was really bothered by the cartoon characters with realistic eyes and hands. But by the end of the film I was engaged enough in the story that I didn't notice so much anymore. However, until the kids who prefer a Robert Zemeckis zombie-fest become the norm, artists who want to add realism into the animation industry are going to have to be sensitive to the issue. Does this mean you can never define the forms around the nose?

surface fragments: How the Old Masters created the look of Gold in Painting The detail (above) from Van Loo's painting, Marie Leszczinska Queen of France, is fascinating to me. I've been trying to figure out why I think his rendering of the gold table is unsuccessful. Though he's obviously a meticulous craftsman and clearly spent ages with a magnifying glass in one hand and a paintbrush in the other, there's something overwrought about the brushwork. Local color and value are notoriously hard to read, so I took color samples from the sword handle, (a) through (e) above, and then de-saturated them to get their values. The values are all gathered tightly around the bottom of the spectrum, between Value 1 and 3. I knew that medieval painters, when planning to include gilding in a painting (say, on a halo), would map out their value composition as if the gold leaf was a dark element. I tried the same experiment on another sample, this time a much brighter 'gold', taken from Le Brun's Hall of Mirrors painting in Versailles... Yikes! Let's look at it more closely.

Free art lessons, learn to draw sketch paint Cartoon Fundamentals: Create Emotions From Simple Changes in the Face There are millions of eyes, mouths, noses, ears, chins in the world, each with their own characteristics. However, to draw faces in a cartoon style, you just need to understand the basics of them. Once you have mastered these concepts, pay attention to the depth, make sure that the head of your characters give the impression of being three-dimensional and you have mastered the technique of drawing them from every imaginable angle. If you can do that, great! But if you really want to draw attention to your art, you have to master the technique to bring them to life with facial expressions! Practically anyone can draw a face. The various expressions of the human face, like the different tones of voice, can be changed with ease. If I ask you to describe exactly what kind of feelings do you identify in the image below, what do you say? I know what, you'll tell me that the figure gives you a sense of calm and reflection. That's OK if you use this expression everyday in your drawings.

Best Cydia Sources/Repos of 2014 for iOS 7.x Tweaks and Mods Although we may be jumping a little early on this one, it’s time to boot up Cydia and make sure you’ve got the repos added. The list isn’t new but it’s worth revisiting every year as new jailbreak software comes out. As you know, Evasi0n7 was released this Sunday. Call it a surprise Christmas gift even though things aren’t looking great for the tweak community as such due to compatibility issues. Nevertheless, here’s a list of the most popular and most useful iOS 7 Cydia repos / sources of 2014. (Note: some more repos are mentioned in this post: Best Cydia Repos (2013) for iOS 6.x) Best Cydia Sources/Repos of 2014 for iOS 7 Repo: BigBoss Source: BigBoss is the single largest source of most popular tweaks. Repo: ModMyi Source: Right next to BigBoss, it’s ModMyi (although some folks would argue the opposite). Repo: Rpetri.ch Source: Repo: iSpazio Source: Rogue Repos

Enliighten Royalboiler — 18 tips for comics artists by Moebius "brief manual for cartoonist " OutWit Hub :: Firefox Add-ons Recommended Free Ebooks for learning how to draw and paint - Loomis, Bammes, Speed | How to Digital Paint These are really valuable sources of knowledge for learning how to draw and paint. I recommend you study these books daily and apply what you learn into studies and your artwork. I recommend you study in this order but it’s really up to you. 1. Fun with a Pencil 2. Successful Drawing 3. Practice and Science of Drawing 4. I give more information and discuss these books in the video here Download them here: In this video I give an overview of some great free ebooks out there for fundamental knowledge for drawing and painting. These do not present digital art techniques but the methods and foundational knowledge can definately be applied to the digital platform. The books discussed are mainly by Andrew Loomis (Click titles to download)

Hour of Need -By Jesper Ejsing This is a magic card illustration for the set called Journey into Nyx. It is a setting much like the ancient Greece. I was asked to paint a card showing 2 sphinxes with tiny riders on the back charging down from the sky. When doing 2 figures on an image that is going to be as small as a magic card I always try to focus on one character and make the other less significant. When I got back to the studio the day after and looked at the sketches on my table, a cold feeling of mediocre crept into my stomach and I checked the mail to see if I had already gotten an approval for any of the three. When the sketch is so loose and unrefined as it is, you cannot help to see all kinds of things in there in you mind, that is not necessarily put down in line in the initial sketch. you mind fills out the missing part and create an incredible painting, and sometimes getting that gridy sketch refined and made right is causing you more problems than needed.

Temperature Structure -By Dan dos Santos A few days ago, I discussed a basic Value Structure technique. I showed how we can emphasize the spacial distance between Foreground, Middleground, and Background by restricting each area to a specific part of the value scale, either Black, White or Grey. That very same principal can be applied to Color Temperature as well. Try breaking your composition down into three distinct temperature ranges: Warm, Cool and Neutral. Just like value, restricting certain areas to a particular range of temperature will create a more legible composition and a greater sense of depth. By using tryptic schemes for both color temperature -and- value you ensure focus and legibility in even the busiest of compositions! Once I've decided on the basic value structure, I reinforce that with the same tryptic structure of color temperature. As I paint the image, I incorporate a lot of different colors into each of these areas.

Loomis's Scheme for Tonal Organization Illustrator Andrew Loomis developed a practical scheme for organizing the tonal values of a picture. In his book Creative Illustration he presents squares of four different tones: white, light gray, dark gray, and black.If you let one of those tones dominate, you can arrange them four different ways: 1. Grays and black on white, 2. Nearly any sort of picture can fit one of these plans. For example, this sketch of kids and sleds on snow fits the second plan. These sketches of a mother and a baby near a window follows the third plan.

Collecting How much time and energy do you spend chasing “likes”, “retweets”, “shares”, and the host of additional measurables in the social media sphere? Do you find yourself wondering what it is going to take to go “viral”? Maybe you are worrying about the wrong things… I used to spend a lot of time checking out my “stats” on every article I wrote, every FB post I made, every tweet I tweeted, and every other bit of social media promotion I was involved in. After all the time and money, I saw a slight increase in my stats, but nothing to justify all the effort. “What are you trying to do with all this effort you are spending promoting yourself?” That bit of advice was incredibly important to me. I had many conversations with artists about using social media to grow their fan base. Let me ask you a question though - what are all those fans doing for you? Now, I’m not telling you that you are an ego-maniac if you are trying to grow your fan base. Image by HighGraphic.com Support ArtOrder: Comments