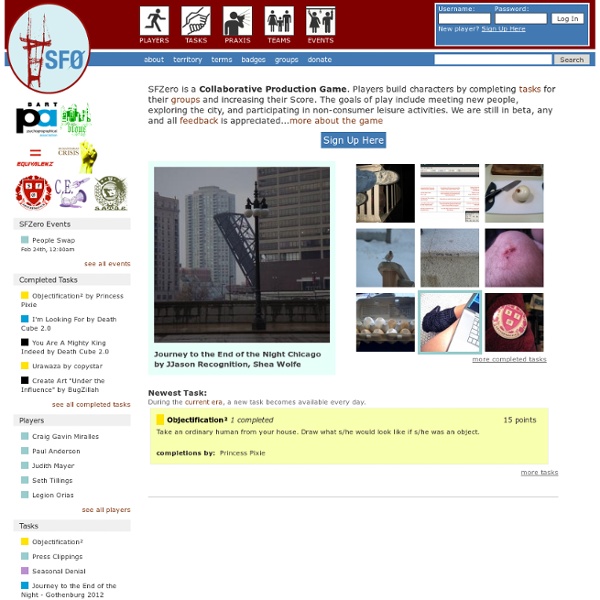 Escrito en la pared Gamers turn cities into a battleground - 12 June 2005 Read full article Continue reading page |1|2 Matt has been abandoned on Tower Bridge, London, with nothing except his clothes and a mobile phone. A woman dressed in black walks past, and Matt receives a text message to follow her. He doesn't know who she is, or where she is going. Matt is playing Uncle Roy All Around You, where for one day he is the main character in an elaborate experimental fantasy game played out across the streets of London. Urban gaming started in the 1990s with the advent of "geocaching", where GPS is used to pinpoint exact locations. "The limitations of physical space makes playing the game exciting," says Michele Chang, a technology ethnographer with Intel in Portland, Oregon. Game evolution While many of the first real-world games involved using separate GPS receivers and handheld computers, mobile phones and PDAs that integrate such technology are catching up. Another phone-based game is a variant of the classic arcade game Tron. Treasure hunts More from the web

100 Strangers Self Aware | Making games that connect people Graffiti artist Banksy unmasked ... as a former public schoolboy from middle-class suburbia By Claudia Joseph for MailOnline Created: 13:38 GMT, 12 July 2008 He is perhaps the most famous, or infamous, artist alive. To some a genius, to others a vandal. Always controversial, he inspires admiration and provokes outrage in equal measure. Since Banksy made his name with his trademark stencil-style 'guerrilla' art in public spaces - on walls in London, Brighton, Bristol and even on the West Bank barrier separating Israelis and Palestinians - his works have sold for hundreds of thousands of pounds. He has dozens of celebrity collectors including Brad Pitt, Angelina Jolie and Christina Aguilera. Enlarge In the frame: The man in this photograph, taken in Jamaica four years ago, is believed to be Banksy He is also known for his headline-making stunts, such as leaving an inflatable doll dressed as a Guantanamo prisoner in Disneyland, California, and hanging a version of the Mona Lisa - but with a smiley face - in the Louvre, Paris. A network of myths has grown up around him.

What is Tourality?Tourality | Tourality Tourality, as a location based game (LBG), is a novel kind of game. Your real environment such as a urban district, some park or even a wood serve as a virtual playground, where your location and movements are identified via GPS-signal emitted from your cell- or smartphone. Your target is to reach certain predefined spots in the game set by moving towards them with your mobile device. Challenges You can battle other gamers in the multiplayer mode, join forces in a team or even compare your highscore as single player with other gamers in the Tourality-community. Unlike Geocaching, Tourality focuses on time, your aim is to be faster than the other. Game Sets The game sets are being generated automatically for you via an OpenStreetMap interface. Goodie Spots In a game set, so called “goodie spots” can appear, conceiling something special. Gadgets Gadgets are virtual items and devices you can buy, activate and apply throughout the game. Gold Gold is the virtual currency in Tourality. Trophies

Nine Leading Companies and Fujisawa City to Collaborate on Sustainable Smart Town Project | Headquarters News | Panasonic Global 'Fujisawa Sustainable Smart Town' will Lead the World by Installing Solar Panels and Home-use Storage Batteries in Every Household The Business Partnership will Capitalize on the Strengths of Each Company to Realize a Comfortable Lifestyle with a New Level of Safety and Security Tokyo, Japan - Panasonic Corporation and eight other companies that are spearheading advanced environmental initiatives through eco-conscious urban development and smart city projects today announced they will work together to implement a smart town concept called "Fujisawa Sustainable Smart Town (Fujisawa SST)" which showcases Panasonic's "entire solutions" business model in full scale to the world. The city of Fujisawa, in cooperation with the surrounding regions, will also participate in the efforts to globally promote Fujisawa SST as a model project of an environmentally-minded city in action. ■Roles and Responsibilities for Each Business Partner Accenture Mitsui & Co., Ltd. Nihon Sekkei, Inc. ORIX Corporation