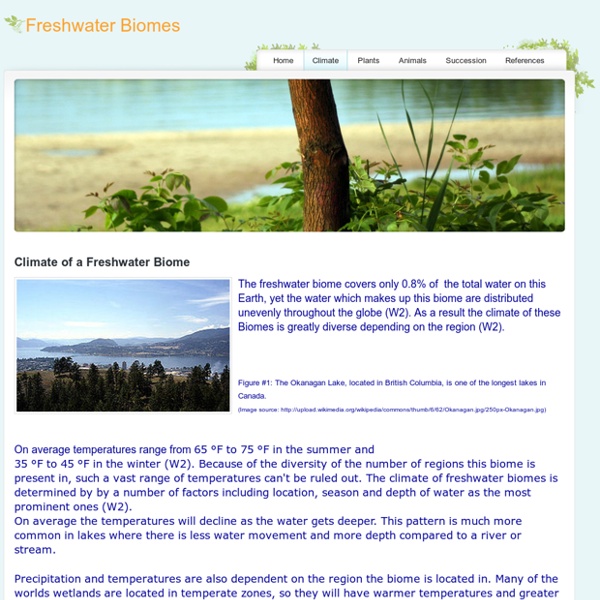 The freshwater biome covers only 0.8% of the total water on this Earth, yet the water which makes up this biome are distributed unevenly throughout the globe (W2). As a result the climate of these Biomes is greatly diverse depending on the region (W2). Figure #1: The Okanagan Lake, located in British Columbia, is one of the longest lakes in Canada.(Image source: On average temperatures range from 65 °F to 75 °F in the summer and 35 °F to 45 °F in the winter (W2). Precipitation and temperatures are also dependent on the region the biome is located in.

KDE Santa Barbara Location | Plants | Animals | People | Links LOCATION: Freshwater ecosystems include lakes, ponds, rivers, and streams. Lakes are large bodies of freshwater surrounded by land, while ponds are smaller bodies of water surrounded by land. Lake Baikal, in central Asia, is the biggest lake on Earth; it contains about one fifth of the Earth’s freshwater and has a maximum depth of 5,315 feet (1,620 meters)! PLANTS: Plants and algae are important to freshwater biomes because they provide oxygen through photosynthesis, and food for animals in this biome. ANIMALS: Many animals live in freshwater ecosystems. PEOPLE AND FRESHWATER BIOMES: Without freshwater biomes you and I would not be alive. So, what can we do to help freshwater biomes? Freshwater ecosystems: What’s it like where you live? Freshwater Ecology All Along a River Aquatic Ecosystems (available in English or French) KidzWorld: Aquatic Biomes US EPA: Wetlands US EPA: What you can do to protect your watershed Back to Biomes Index

water tempature Freshwater stress: current population at risk | GRID-Arendal - Publications - Vital Climate Graphics 37. One study suggests that although global water conditions may worsen by 2025 due to population pressure, climate change could have a net positive impact on global water resources. NB! Note that other studies indicate that with present consumption patterns, 2 of every 3 persons on Earth will experience water stress by 2025. The diagram on the left side shows the result of this particular study, indicating the water availability for the population. It should be noted that the study is based on runoff characteristics obtained for one particular climate scenario. The diagram on the right-hand side shows a projection of the population living in increased and decreased water stress under three different CO2 emission scenarios in the 2080s. Climate change is likely to have the greatest impact in countries with a high ratio of relative use to available supply.

Climate Climate change and ecosystems This article is about climate change and ecosystems. Impacts[edit] Unchecked global warming could affect most terrestrial ecoregions. Increasing global temperature means that ecosystems will change; some species are being forced out of their habitats (possibly to extinction) because of changing conditions, while others are flourishing. For the IPCC Fourth Assessment Report, experts assessed the literature on the impacts of climate change on ecosystems. Terrestrial ecosystems and biodiversity: With a warming of 3°C, relative to 1990 levels, it is likely that global terrestrial vegetation would become a net source of carbon (Schneider et al., 2007:792). Studying the association between Earth climate and extinctions over the past 520 million years, scientists from the University of York write, "The global temperatures predicted for the coming centuries may trigger a new ‘mass extinction event’, where over 50 per cent of animal and plant species would be wiped out Forests[edit] Mountains[edit]