Meditation Health Benefits: What The Practice Does To Your Body 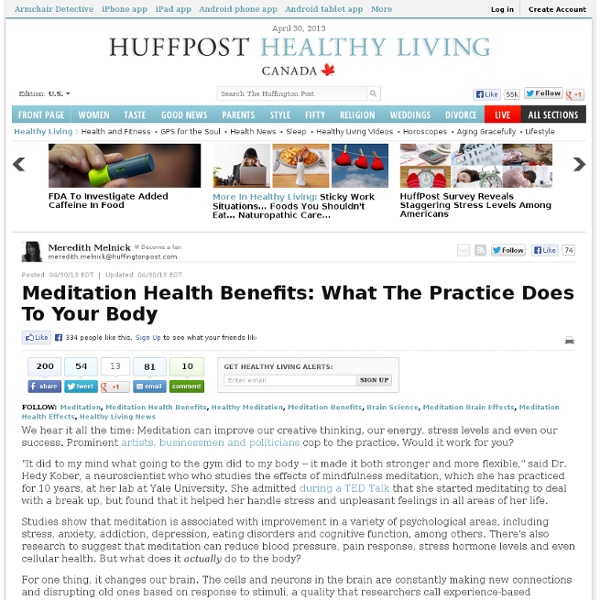 We hear it all the time: Meditation can improve our creative thinking, our energy, stress levels and even our success. Prominent artists, businessmen and politicians cop to the practice. Would it work for you? "It did to my mind what going to the gym did to my body -- it made it both stronger and more flexible," said Dr. Studies show that meditation is associated with improvement in a variety of psychological areas, including stress, anxiety, addiction, depression, eating disorders and cognitive function, among others. For one thing, it changes our brain. "Think of the end of a neuron as a hand, with thousands of 'fingers,'" said Dr. Want to learn more? This story appears in Issue 47 of our weekly iPad magazine, Huffington, in the iTunes App store, available Friday, May 3. Related on HuffPost: Related:  Neuroscience & Consciousness

The Enormous Promise of Psychedelics for Sustaining Health, Happiness and Sanity April 26, 2013 | Like this article? Join our email list: Stay up to date with the latest headlines via email. A researcher in a suit and tie strolls past with a graduate student in rainbow leggings and a red bandana. Lagging behind are Rick Doblin, founder and executive director of the Multidisciplinary Association for Psychedelic Studies (MAPS), and a gaggle of dinner attendees who hover around Doblin in hopes that they might share a few words with the man of the hour. It’s nearing midnight when the crowd finally dissipates and Doblin can be sequestered for an interview. “MAPS was founded based on adjusting to a major failure,” Doblin says. “I knew that there was going to be a crackdown because it was already being sold both as a therapeutic drug, and also some people were selling it as ecstasy,” he says. Doblin and fellow therapists formed a non-profit group called Earth Metabolic Design Laboratories (EMDL) to bolster awareness of the therapeutic use of MDMA.

The Vagus Nerve and the Healing Promise of The Sudarshan Kriya Frank Huguenard, Staff WriterWaking Times At the center of our bodies resides a long, sinewy nerve that extends all the way from our medullas down through our chests to beyond our stomachs. This nerve, known as the Vagus Nerve, happens to be at a most fascinating intersection, not only between our two physical nervous systems (our central and autonomic nervous systems) but also between our conscious minds and subconscious minds. As such, it also acts as a bridge between our gross bodies and our subtle bodies. And it’s a nerve probably 99% of the population have never heard of nor even have a clue where it’s located. Research indicates that a healthy vagus nerve is vital in experiencing empathy and fostering social bonding, and it is crucial to our ability to observe, perceive, and make complex decisions. Automated Habit Formation Our consciousness’s natural tendency is to compartmentalize tedious tasks so that the brain can focus on higher priority activities. Dr. Effect on Depression

Scientists Declare: Nonhuman Animals Are Conscious Science leaders have reached a critical consensus: Humans are not the only conscious beings; other animals, specifically mammals and birds, are indeed conscious, too. It may have seemed obvious to you and me that Fluffy and Fido are aware of their own existence and are not simply biological machines. You may also take it for granted, when you stare into the eyes of a chimpanzee, that you're seeing a self-aware being. And that when the whale you helped to free from being tangled in fishing gear proceeded to swim around the boat giving you high fives, she was saying thank-you. But scientists (especially those who make money through experimenting on captive animals) have been very cautious in coming to this conclusion. Finally, however, the official decision was reached in late night discussions two weeks ago during the prestigious annual Francis Crick Memorial Conference . The group didn't attempt to define what consciousness actually is. Read the full declaration here . ShareThis

Pop neuroscience is bunk! By now you’ve seen the pretty pictures: Color-drenched brain scans capturing Buddhist monks meditating, addicts craving cocaine, and college sophomores choosing Coke over Pepsi. The media—and even some neuroscientists, it seems—love to invoke the neural foundations of human behavior to explain everything from the Bernie Madoff financial fiasco to slavish devotion to our iPhones, the sexual indiscretions of politicians, conservatives’ dismissal of global warming, and even an obsession with self-tanning. Brains are big on campus, too. Take a map of any major university, and you can trace the march of neuroscience from research labs and medical centers into schools of law and business and departments of economics and philosophy. Brains are in demand. The prospect of solving the deepest riddle humanity has ever contemplated—itself—by studying the brain has captivated scholars and scientists for centuries. The problem is that brain imaging cannot do any of these things—at least not yet.

Low dose psychedelics increase neurogenesis, help mice unlearn fear | Psychedelic Frontier A new study of mice published in Experimental Brain Research shows that low doses (but not high doses) of psychedelics increase the rate of neuron creation in the hippocampus, and help the mice to rapidly unlearn conditioned fear responses. From the abstract (paragraph breaks added for readability): Drugs that modulate serotonin (5-HT) synaptic concentrations impact neurogenesis and hippocampal (HPC)-dependent learning. This will not surprise anybody who has been able to process deep-seated fears and insecurities with the help of a psychedelic. Research continues to confirm psychedelics’ ability to reduce the conditioned fear response, enabling patients to confront fearful stimuli without the usual baggage of anxiety and defense mechanisms. As head researcher Dr. With the right therapeutic approach, psychedelics allow us to rewire our brains in a positive manner. via Psychedelic Research Google+ community

Take a deep breath – scientists working on a stress breath test Scientists may someday be able to measure a person's stress levels by analyzing compounds in their breath (Photo: Shutterstock) Most of us are able to let other people know that we’re stressed, simply by telling them. For people such as those suffering from Alzheimer’s, however, it can be difficult to express such a thought. In a study involving 10 male and 12 female young adults, test subjects first sat comfortably and listened to soothing classical music, and were then required to perform a Paced Auditory Serial Addition Test (PASAT), an arithmetic test specifically designed to cause psychological stress. The chemical content of those samples was analyzed via gas chromatography-mass spectrometry. It is hoped that ultimately a standard testing procedure can be developed, that will let caregivers know if non-communicative patients are experiencing stress. A paper on the study was recently published in the Journal of Breath Research. Source: Institute of Physics About the Author

Neurobiology of a hallucination Hallucinations are often associated with psychiatric conditions such as schizophrenia or with LSD and related drugs. Hearing voices is a characteristic symptom which is reported by about 70% of schizophrenic patients, as well as by some 15% of patients with mood disorders such as depression; and those under the influence of LSD often experience extreme spatial distortions and surreal visions. Most common are auditory and visual hallucinations, but the other senses can also produce mirages. Temporal lobe epilepsy or brain injury can lead to phantosmia, or olfactory hallucinations, during which one detects pleasing or foul smells (e.g. fresh flowers or rotting flesh) that are not actually present. Hallucinations arise spontaneously and are transient in nature, and so the neural activity underlying them is difficult to study. Theories about how hallucinations occur can be broadly divided into two categories. Purkinje studied this and other visual phenomena for his doctoral thesis.

Neurologist discovers 'dark patch' inside brains of killers and rapists Scans reveal a patch at the front of the brain can be seen in people with records for criminal violenceGerman scientist who made the discovery classifies evil in three groups By Allan Hall In Berlin Published: 15:32 GMT, 5 February 2013 | Updated: 23:29 GMT, 5 February 2013 A German neurologist claims to have found the area of the brain where evil lurks in killers, rapists and robbers. Bremen scientist Dr Gerhard Roth says the 'evil patch' lies in the brain's central lobe and shows up as a dark mass on X-rays. He discovered it when investigating violent convicted offenders over the years for German government studies. Dr Gerhard Roth demonstrates where the 'evil patch' can be identified in the brains of those inclined to violence Scans studied by Dr Roth indicate that the patch he says is associated with wicked behaviour is found at the front of the brain 'We showed these people short films and measured their brain waves,' he said. 'Of course it is not automatic.

First-Ever Incredible Footage of a Thought Being Formed Nothing to fear but suffocation | Body & Brain Not all fear is the same. A woman who laughs at horror movies, grabs dangerous snakes and calmly deals with knife-wielding men nonetheless surrenders to terror at a single puff of suffocating carbon dioxide. This woman, known as SM, has a disease that damaged her amygdala, a brain structure implicated in fear. The need to breathe is one of the most fundamental requirements for survival. Feinstein and colleagues work with SM and other patients who suffer from a rare genetic disorder called Urbach-Wiethe disease. A breath of gas that is 35 percent carbon dioxide can immediately provoke a strong, panicky fear. "It’s automatic,” says Feinstein, who has subjected himself to the procedure multiple times. A recent study using mice showed that the amygdala detects carbon dioxide and helps produce fearlike behavior. But the scientists were wrong. The researchers were equally stunned. It was very striking,” Feinstein says.