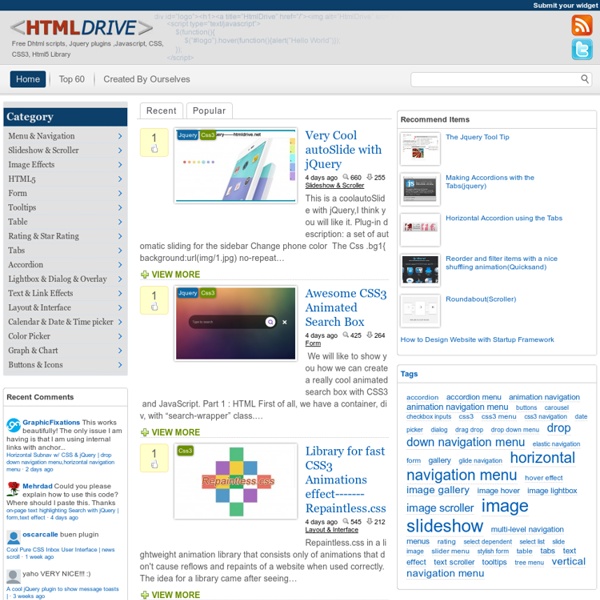 fastcodesign What is responsive design? Most people vaguely understand that it refers to websites that work just as well on desktops as they do on smartphones, but there's a lot more to it than that, leading to widespread confusion (heck, I'll admit, I've even been known to misuse it myself, even after fellow Co.Design writer John Pavlus called me a dummy for it). But the principles of responsive design aren't that hard to understand, thanks to this amazing collection of animated GIFs put together by the guys Froont, a San Francisco-based company specializing in making tools for designers to create responsive websites. Spend just a few minutes with these GIFs, and you'll never be hoightily corrected by a design pedant about "responsive websites" versus "adaptive websites" ever again. In fact, you can be that hoighty pedant! The GIFs below show many of the basic principles of responsive designs, with explaining quotes by Froont co-founder Sandijs Ruluks.

GameMaker: Studio GameMaker: Studio caters to entry-level novices and seasoned game development professionals equally, allowing them to create cross-platform games in record time and at a fraction of the cost of conventional tools! In addition to making game development 80 percent faster than coding for native languages, developers can create fully functional prototypes in just a few hours, and a full game in just a matter of weeks. Key Features GameMaker: Studio Feature Comparison HTML5 and jQuery filter images Portfolio we will be making a beautiful HTML5 portfolio powered by jQuery and the Quicksand plugin. You can use it to showcase your latest work and it is fully customizable, so potentially you could expand it to do much more. The HTML The first step is to write down the markup of a new HTML5 document. In the head section, we will include the stylesheet for the page. The jQuery library, the Quicksand plugin and our script.js will go right before the closing body tag:

How to Check Your Website with Multiple Browsers on a Single Machine (Cross-Browser Compatibility Checking) To Check Your Site for Cross-Browser Compatibility by Christopher Heng, thesitewizard.com We all know the importance of checking our web pages with multiple browsers, especially when we are designing a new layout for a website. This is the case even if we are writing validated standards-compliant code. The number of extant browsers we need to check with are enormous: Internet Explorer ("IE") 6 to 11, the current version of Firefox, the current version of Chrome (or Opera, which uses the same code), the current version of Safari, and so on. And then there are the different platforms: Windows, Macintosh (Mac), Linux, etc. Translate Your Website: 50 Resources for Multilingual Websites Want to translate your website? There’s more to it than meets the eye. Translating the text word-for-word might seem simple. But it’s often more challenging than it looks…and it’s often not enough. To truly connect with your customers, your site must take into account their culture, beliefs, aesthetics and values. Website localization is the process of adapting your site to connect with customers in new languages and cultures.

GameMaker: Studio on Steam Update Notes The GameMaker: Studio family of products caters to entry-level novices and seasoned game development professionals equally allowing them to create casual and social games for Steam Workshop, iOS, Android, Windows Phone, desktop and the Web (HTML5) in record time and at a fraction of the cost! As well as making games development 80 percent faster than coding for native languages, developers can create fully functional prototypes in just a few hours, and a full game in just a matter of weeks.

Creating a “Filterable” Portfolio with jQuery If you have worked in your field for a while, there is a pretty good chance that you have a rather extensive portfolio. To make it a little easier to navigate, you will probably be tempted to break them into different categories. In this tutorial, I will show you how to make "filtering by category" a little more interesting with just a little bit of jQuery. Our portfolio is nothing more than a simple unordered list: Note: I was by no means a part of creating these wonderful sites; I am just using them as examples. We are going to assume that our portfolio can be broken down into 5 categories:

Ultimate IE6 Cheatsheet: How To Fix 25+ Internet Explorer 6 Bugs inShare33 The best strategy for dealing with Internet Explorer 6 is not to support it. Stop. object-fit SummaryEdit The object-fit CSS property specifies how the contents of a replaced element should be fitted to the box established by its used height and width. SyntaxEdit