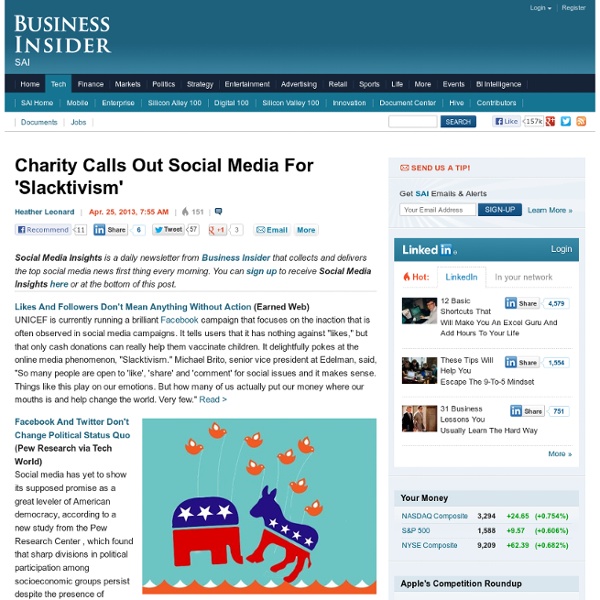 Social Media Insights is a daily newsletter from Business Insider that collects and delivers the top social media news first thing every morning. You can sign up to receive Social Media Insights here or at the bottom of this post. Likes And Followers Don't Mean Anything Without Action (Earned Web)UNICEF is currently running a brilliant Facebook campaign that focuses on the inaction that is often observed in social media campaigns. It tells users that it has nothing against "likes," but that only cash donations can really help them vaccinate children. It delightfully pokes at the online media phenomenon, "Slacktivism." Michael Brito, senior vice president at Edelman, said, "So many people are open to 'like', 'share' and 'comment' for social issues and it makes sense. Social Media Content Mistakes To Avoid (Business2Community)When planning your social marketing strategy and being active on social channels, avoid these common content mistakes.

Why Social Media Is Reinventing Activism The argument that social media fosters feel-good clicking rather than actual change began long before Malcolm Gladwell brought it up in the New Yorker — long enough to generate its own derogatory term. “Slacktivism,” as defined by Urban Dictionary, is “the act of participating in obviously pointless activities as an expedient alternative to actually expending effort to fix a problem.” If you only measure donations, social media is no champion. The national chapter of the Red Cross, for instance, has 208,500 “likes” on Facebook, more than 200,000 followers on Twitter, and a thriving blog. But according to the Chronicle of Philanthropy, online donations accounted for just 3.6% of private donations made to the organization in 2009.

Article Record Email 0 selected item(s) Email the selected 0 item(s) to the address given below. Note that both the "To" and "From" addresses must be complete (e.g., user@umich.edu). (back) Export to Refworks Clicking on the button below will send the 0 selected item(s) to Refworks. What is social media Social media is the collective of online communications channels dedicated to community-based input, interaction, content-sharing and collaboration. Websites and applications dedicated to forums, microblogging, social networking, social bookmarking, social curation, and wikis are among the different types of social media. Here are some prominent examples of social media: Facebook is a popular free social networking website that allows registered users to create profiles, upload photos and video, send messages and keep in touch with friends, family and colleagues. According to statistics from the Nielsen Group, Internet users within the United States spend more time on Facebook than any other website. Twitter is a free microblogging service that allows registered members to broadcast short posts called tweets.

Colombians Use Social Media to Support Striking Farmers "Wear a ruana, because we are all from the country!" Photo: Facebook/events/Hosted by AnGela JoyIta RoJas and Yady Calvache At the place where potato fields and cyberspace meet, Colombians are building a movement in support of striking farmers, who in their second week of protests have taken the country by storm. Worldwide social activism demanding change By Graham Peebles Change is afoot. Confronted with state corruption and corporate greed, abuse of human rights, environmental chaos and extreme levels of economic and social injustice, the people, overwhelmingly the young, are taking to the streets demanding change and a new political/economic system that is inclusive and just. With growing unity and confidence, people throughout the world are expressing their collective will and crying out for freedom, justice and equality, and to be listened to – not only by governments, but also by international institutions, the World Bank, the International Monetary Fund and central banks. These are enormously powerful global bodies which influence and fashion economic frameworks that affect the lives of billions of people. Divisive, ideologically-rooted policies designed to serve the interests of corporations and multinational companies are causing suffering and anxiety among millions of people in developed and developing countries.

Inside Indonesia - a quarterly magazine on Indonesia and its people, culture, politics, economy and environment Indonesia is Facebooking, Twittering and blogging, but what effect is this having on campaigns for social justice? Indonesia is online. The number of Indonesians using the internet increased from two million in 2000 to over 55 million in 2012, the fourth largest number of internet users in Asia (after China, India and Japan). Thushara Dibley This phenomenal growth in access to the internet has been supported by a rapidly growing economy as well as the widespread uptake of mobile phone technology.

Social Activism Careers in Social Activism--An Introduction Social activism is an intentional action with the goal of bringing about social change. If you feel strongly about a cause and are working towards a change, you could be considered an activist. An activist is anyone who is fighting for change in society.

How to Implement Your Content Sharing Strategy for Higher Ed: Part I Date posted: July 11, 2013 The rapidly evolving fields of Content and Social Media converge in a very busy intersection of marketing objectives, strategy, tactics and tools. Even for those of us who work in this area every day, this intersection is noisy, confusing and frustrating, as we try to effectively manage all of these complex elements, while keeping up with the latest tools and practice. Activists, Pundits, and Quiet Followers: Engaging the public in social issues McKinsey on Society Research shows that needs and attitudes are more important than demographics or behaviors in determining how people engage in social issues. August 2010 | Santiago Delboy, Christy Gibb, Jonathan Law, Bart Sichel, and Lynn Taliento Facebook Begins Penalizing "Low Quality" Content on Pages What’s the #1 priority of all Facebook page owners? Creating posts that get engagement & make fans take action! Often times this means posting viral photos (including memes) & updates that are completely off topic, but engaging. The idea is to get tons of engagement on these posts, increase Edgerank, & ensure your other posts (for example, link posts that drive traffic to your website) get seen by more people. I’m all for this — and it’s a tactic we’ve employed on Post Planner’s page for quite some time. With huge success.

Social Media Audit Neil Scaffer Welcome to 2013! Now that you’ve read all of the “best of 2012″ and “predictions for 2013″ posts, it’s time to take a fresh look at your social media operations and optimize for the new year. A social media audit is part of any social media strategy consulting that I do, but to give you some simple advice as to what you should do to further improve on your social media presence, ask yourself the following 10 questions: Social Media Platforms 1) Are your activities on the various social media websites aligned with where your target customers are spending their time?