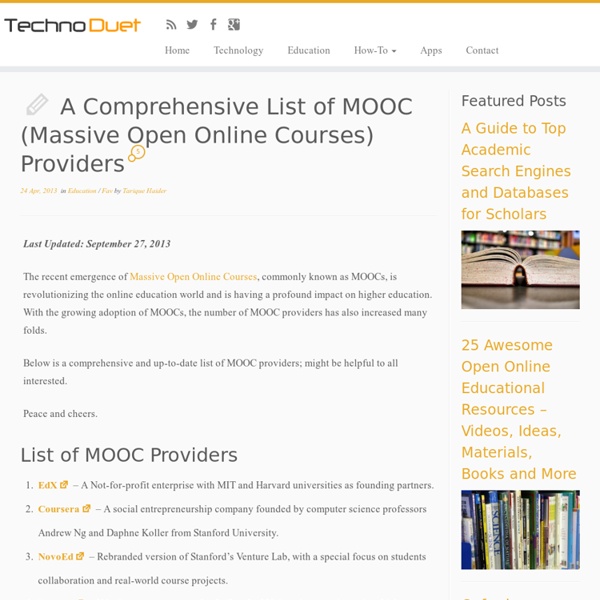 Last Updated: September 27, 2013 The recent emergence of Massive Open Online Courses, commonly known as MOOCs, is revolutionizing the online education world and is having a profound impact on higher education. With the growing adoption of MOOCs, the number of MOOC providers has also increased many folds. Below is a comprehensive and up-to-date list of MOOC providers; might be helpful to all interested. Peace and cheers. Update on June 14, 2013 27. Update on June 30, 2013 29. Update on July 09, 2013 30. Update on August 02, 2013 36. A brief description of the above three can be found here. Related:  MOOCs • MOOC

Donald Clark Plan B As the MOOCosphere expanded, more and more platforms sprung into action. Some have already delivered large numbers of MOOCs, such as the open source platform EdX and the Coursera. The other big ticket platform is Udacity which has now morphed into a specific market – corporate training. Although the wellspring was in the US, the UK, Europe, India, Russia, Brazil and many others have joined the party. The global LMS/VLE vendors (Blackboard, Desire2learn, SAP) and Moodle have jumped on the bandwagon. Some so-called MOOC platforms aren’t really platforms at all – they’re aggregators. Look to the cloud As my friend Dick Moore says, be very careful here. New platforms, such as Futurelearn and Canvas, are typically constructed using frameworks such as Ruby on Rails, others in Python. Why does this matter? EdX EdX is one of the big boys in the market and has established a firm position with its ‘open source’ offer, solid funding and global reach. NovoEd

Open Culture - The best free cultural & educational media on the web Why the campus is still king in the age of the MOOC With higher education increasingly going online and the recent arrival of Massive Open Online Courses (MOOCs), many have predicted the death of the university campus. It’s said that the student no longer needs to go anywhere, class will come to them. But these predictions are unfounded. The campus will survive the age of online learning, but not without change. Online buzz MOOCs might be novel right now, but the truth is teaching materials, such as lectures, have been available for little or no cost to students for longer than most can remember. Yet even OU still engages with students on campuses – not only their own, but also on underused campuses of other institutions. Before MOOCs were even thought of, many institutions had also done away with campuses all together. It’s also true that some forms of learning do not require the campus; for example, Melbourne University students use online instructions to master the use of software packages. Teaching machines? The future campus

'Social Entrepreneurs' Bring Hope and Contradictions to the College Market - Technology By Jeffrey R. Young Many of the boldest experiments in higher education these days are led by a relatively new kind of business leader: the social entrepreneur. The founders of Coursera proudly claim the label, stressing their lack of concern about a business plan as they set up free online courses from top colleges. But other than a promise to do good, being a social entrepreneur in higher education appears to have no strict meaning, at least to the lawyer or the tax man. It is also a commentary on what the new entrepreneurs see as the slow pace of change at nonprofits—that traditional colleges and foundations move too slowly to make big innovations happen without a push. Daphne Koller, the 44-year-old co-founder of Coursera, embodies this new ethos. In every decision the company makes, she says, the first question is, "Is this in the best interest of our students?" For instance, Coursera has rejected the idea of selling advertising on its Web site, Ms. Ms. More Contradictions Mr. Mr.

The Eudyptula Challenge The Worldwide MOOC | Introduction to Digital Humanities MOOCs are perhaps the hottest topic both in the DH community and throughout the education system. In fact, it has been said that MOOCs and the study of them are changing so rapidly, there is something new being published about them nearly every day. The Chronicle of Higher Education is closely following the trend, and just yesterday printed an article and flow chart of the Major Players in the MOOC Universe. Following the discussion panel titled “MOOCs in Higher Education: education for everyone?” Funding • Where is the money coming from? Access • What are issues with public vs. private institutions? Purpose & Benefits • What can you “do” with a MOOC? Pedagogy • How do MOOCs differ from a traditional campus-based education? Trendiness & Bureaucracy • Is this just a “trend” and what role does college administration play in the MOOC movement? Immigrants vs. Efficacy & Retention • Is attrition a bad thing? Sample MOOC

MOOCs face challenges in teaching humanities Even as massive open online courses (MOOCs) continue to assume an increasingly prominent role in education, regularly enrolling thousands of students from around the world in classes taught by professors from dozens of universities, their rapid growth has sparked a backlash focused on the potential loss of diversity and interaction in education. In one such instance, the San Jose State University Department of Philosophy wrote an open letter in April to Harvard professor Michael Sandel, explaining their refusal to offer his edX course, Justice, as a part of their curriculum. “The thought of the exact same social justice course being taught in various philosophy departments across the country is downright scary—something out of a dystopian novel,” the letter read. “Departments across the country possess unique specialization and character, and should stay that way…Diversity in schools of thought and plurality of points of view are at the heart of liberal education.”

The 6 Characteristics Of Modern Online Language Learning How Online Learning Is Like Babysitting 5.31K Views 0 Likes It's no secret that online learning is time-consuming and very tough for many students. It's actually not unlike babysitting a three year old! 5 MOOCs Teachers Should Take As Students 9.84K Views 0 Likes MOOCs may or may not save higher education, and if they save it they may further widen the gap between elite and lesser-known schools. MOOCs and Historical Research At first glance one might imagine that the challenges presented by massive open online courses (MOOCs) have everything to do with teaching and nothing to do with historical research. Jeremy Adelman, writing in this same issue of Perspectives, discusses some of these challenges as he describes his experiment combining a Princeton University classroom with a global one, offered to students everywhere, via his world history MOOC. As Adelman shows, much remains to be seen about the viability of history MOOCs, but for the sake of speculative argument suppose that MOOCs are indeed the next big thing, for history as well as for other subjects. Here I will offer two rival visions, one grim and one cheerful. If MOOCs send a gale of creative destruction through academia, it will affect some fields more than it will history. First, a dystopian vision: If history MOOCs catch on, fewer academic historians will be working at research and indeed working at all.

Making Sense of MOOCs -- A Reading List | A World Bank Blog on ICT use in Education A few years ago I participated in a fascinating online course. I had earlier read a thought-provoking article called Connectivism: A Learning Theory for the Digital Age by a Canadian academic named George Siemens, and was intrigued to stumble across references to a related online discussion that was taking place, led by Professor Siemens and another Canadian researcher named Stephen Downes. OK, to be honest, I am not sure that I actually participated in the course (and I wasn't actually sure if it was a course in the traditional sense ... although it was certainly a community), given that my 'participation' consisted of a haphazard scanning of emails and RSS feeds being generated by people whose were much more engaged in the effort than I was. I saw Siemens speak at eLearning Africa, was suitably impressed, and later tried to figure out a way to bring him to the World Bank to talk about his work as part a new series we were trying to put together on 'eduradicals'. 1. 2. 3. 4. 5. 6. 7.

HIST103: World History in the Early Modern and Modern Eras (1600-Present) This course will present a comparative overview of world history from the 17th century to the present era. You will examine the origins of major economic, political, social, cultural, and technological trends of the past 400 years and explore the impact of these trends on world societies. This course will be structured chronologically and thematically, with each unit focusing on a significant historical subject. The units will include representative primary-source documents and images that illustrate important overarching themes, such as the emergence of modern nation-states, the economic and technological interactions between Western and non-Western peoples, the changing social and cultural perceptions about religion and the state, and the development of physical and virtual networks of information exchange. This course is designed to align with Thomas Edison State College TECEP examination. Welcome to HIST103:World History in the Early Modern and Modern Eras (1600-Present).

Four more universities join Futurelearn | News Four more universities have announced plans to offer massive open online courses via the UK-based Futurelearn platform, taking the total number of higher education institutions involved to 21. Loughborough University and the universities of Sheffield, Glasgow and Strathclyde are the latest to partner with the Open University-owned company, which is due to start offering courses from affiliated universities, free of charge, later this year. In addition, the British Museum has signed up to work with Futurelearn, following the lead of the British Library, which partnered with the Mooc provider in February, and the British Council. “We are delighted that more of the UK’s leading universities, along with one of its most popular cultural institutions, have agreed to work with Futurelearn,” said Simon Nelson, chief executive of Futurelearn, who told Times Higher Education in March that more university partners were set to be announced. chris.parr@tsleducation.com Click to rate 0 out of 5 stars

To MOOC or Not to MOOC – WorldWise MOOCs have become a media obsession. Why? In part because they are the continuation of a story that has been around since at least the 1990s and the first days of magazines like Wired and Fast Company. At that time, information technology was depicted as part of a revolution: Marxist rhetoric had been appropriated by capitalism. I’d like to think that since then we’ve learned something. After all, universities have produced a substantial body of research that argues that information technology is not an epochal economy-changing technology. These sources must induce at least some suspicion about the wider claims concerning MOOCs, or massive open online courses. Why this obsession with MOOCs? Second, because it taps into a vein of middle-class anger over tuition costs. Third, because in a time of austerity, nations are searching for ways of reducing higher-education spending, and MOOCs can look like a silver bullet, making it all so much easier to cut and still feel good about it.