6 Alternatives To Bloom's Taxonomy For Teachers - 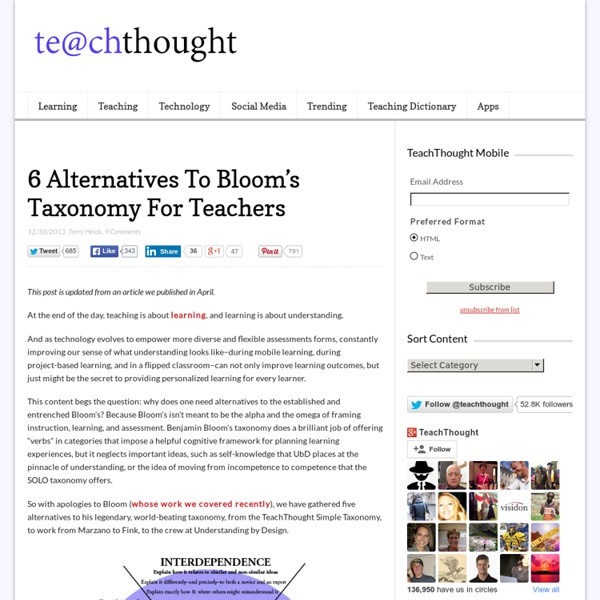 This post is updated from an article we published in April. At the end of the day, teaching is about learning, and learning is about understanding. And as technology evolves to empower more diverse and flexible assessments forms, constantly improving our sense of what understanding looks like–during mobile learning, during project-based learning, and in a flipped classroom–can not only improve learning outcomes, but just might be the secret to providing personalized learning for every learner. This content begs the question: why does one need alternatives to the established and entrenched Bloom’s? Because Bloom’s isn’t meant to be the alpha and the omega of framing instruction, learning, and assessment. So with apologies to Bloom (whose work we covered recently), we have gathered five alternatives to his legendary, world-beating taxonomy, from the TeachThought Simple Taxonomy, to work from Marzano to Fink, to the crew at Understanding by Design. Six Facets of Understanding with examples

Creating Understanding - Beyond Bloom This weekend I was leading a Making the PYP Happen workshop at my school for our new staff. In designing the engagements for this workshop I drew heavily on the Visible Thinking routines of Harvard Project Zero. A number of years ago, when I was working at the International School of Amsterdam, I was lucky enough not only to attend the PZ summer institute, but also to be part of a year long cohort working with Mark Church (who was at that time a middle school teacher at ISA) about teaching for understanding. Five routes to more innovative problem solving Rob McEwen had a problem. The chairman and chief executive officer of Canadian mining group Goldcorp knew that its Red Lake site could be a money-spinner—a mine nearby was thriving—but no one could figure out where to find high-grade ore. The terrain was inaccessible, operating costs were high, and the unionized staff had already gone on strike. In short, McEwen was lumbered with a gold mine that wasn’t a gold mine. Then inspiration struck. Attending a conference about recent developments in IT, McEwen was smitten with the open-source revolution.

7 Myths About Rigor In The Classroom 7 Myths About Rigor In The Classroom by Barbara Blackburn, author of Rigor is not a 4-Letter Word Despite all the research, there are seven myths about rigor that are often heard. Student Self-Assessment and Skills Across Grades One of the great parts of working with lots of smart, dedicated educators on a regular basis is the number of smart ideas and insights you share with us at trainings. Recently, a teacher asked whether we had any self-assessment tools for students, developed from our The Common Core, Clarifying Expectations for Teachers and Students books. Although we haven't created an extensive resource with reproducibles, one of our primary literacy trainers recently developed a few examples self-checklists for a session in Tennessee that I thought you might find informative. The training focuses on diving deeper into the primary writing process and highlighting how skills relate and build between years.

44 Prompts Merging Reflective Thinking With Bloom's Taxonomy 44 Prompts Merging Reflective Thinking With Bloom’s Taxonomy by Peter Pappas It’s been four years since I first published my “Taxonomy of Reflection.” My interest in reflective thinking is rooted in a simple but powerful statement by Donald Finkel who wrote that teaching should be thought of as “providing experience, provoking reflection.”

Mary Midgley Current scientific concepts are not adapted to focusing on subjectivity. Indeed, many of them have been carefully adapted to exclude it, much like cameras with a colour filter. [...] Galileo and Descartes saw how badly the study of objects had been distorted by people who treated these objects as subjects, people who credited things like stones with human purpose and striving. So they ruled that physical science must be objective . Six Scaffolding Strategies to Use with Your Students What’s the opposite of scaffolding a lesson? Saying to students, “Read this nine-page science article, write a detailed essay on the topic it explores, and turn it in by Wednesday.” Yikes—no safety net, no parachute, no scaffolding—they’re just left blowing in the wind. Let’s start by agreeing that scaffolding a lesson and differentiating instruction are two different things. Scaffolding is breaking up the learning into chunks and then providing a tool, or structure, with each chunk.

Assessment Blueprints and Test Specifications PARCC has released a set of test specification documents, including assessment blueprints and evidence statement tables, to help educators and the general public better understand the design of the PARCC assessments. Blueprints are a series of documents that together describe the content and structure of an assessment. These documents define the total number of tasks and/or items for any given assessment component, the standards measured, the item types, and the point values for each

Bay Village, Rocky River schools among those preparing for Common Core, state learning standards CLEVELAND, Ohio -- Changes due next year in classrooms across Ohio already have arrived on the West Shore. In anticipation of new learning standards scheduled to be in place for the 2014-15 school year, school districts already have partially, or fully, phased in the standards. Those in English language arts and math are the result of a multi-state effort known as the Common Core. Ohio also has new, more rigorous state academic content standards in science and social studies. Bay Village began aligning its curriculum with the new learning standards after they were adopted by the state school board in 2010, said Char Shryock, director of curriculum and instruction for the Bay schools. While the standards have their critics, supporters like Shryock say the aim is to produce students who are able to apply their knowledge to real-world situations, rather than memorizing facts for a test, parroting the answers and forgetting them once the exam is over.

Does Bloom’s Taxonomy still have a role to play in e-learning? Mayes and de Freitas (2004) state that the use of technology can be used to achieve better learning outcomes, more effective assessments or a more cost effective way of bringing learning environments to students; and that reforming practice requires transformation of the understanding of the principles. So what are the pedagogical principles behind “e” learning? The definitions of e-learning are numerous and varied but one excepted definition is "learning facilitated and supported through the use of information and communications technology", (JISC, 2003). In their report (2004) Mayes and de Freitas go on to surmise that in this framework (ie e-learning) there are no models for e-learning per se, only e-enhancements of models of learning in general.

Decoda Literacy Solutions These are materials for educators, tutors, practitioners and anyone who is interested in assessment in community-based adult literacy programs. Every item on this list is available, either from the library or online. Background Achievement in non-accredited learning for adults with learning difficulties: report of the scoping study. Liz Maudsley and Christine Nightingale. Leicester, UK: NIACE, 2004.» How to create assessments for the Common Core By Meris Stansbury, Associate Editor @eSN_Meris Read more by Meris Stansbury January 16th, 2014 How to create new formative assessments to measure complex student comprehension The rigors of the Common Core State Standards (CCSS) ask today’s educators not to simply measure students’ factual knowledge, but instead accurately assess students’ critical thinking.