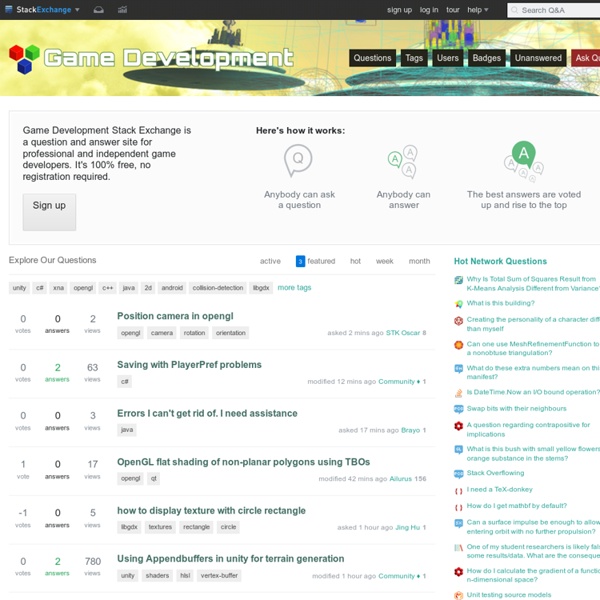 Level Design A plethora of level-design related texts and pieces from my brain. Mapography I’ve made a bunch of maps in my time. Automatic XNB serialization in XNA Game Studio 3.1 - Shawn Hargreaves Blog One of the new features in Game Studio 3.1 is automatic serialization for .xnb files. This is a feature I have wanted ever since we first designed the Content Pipeline, so it makes me very happy that we finally found time to implement it! Short Version

Indie Resources On the 30th July 2014 the site got updated, restrutured and redesigned… however the update is still not finished and thus this new Indie Resources overview page is partly incomplete. In case you are missing something you can still check out the outdated old Indie Resources page until the update is complete. Thank you for your understanding. (Game Making Tools, Game Design, Postmortems, Programming, Project Management…) (Create/Download Graphics, Hire Graphic Designer…) (Create/Download Sound + Music, Hire Sound Designer/Musician/Voice Actor…) Game programming Development process[edit] Prototyping[edit] Programmers are often required to produce prototypes of gameplay ideas and features. A great deal of prototyping may take place during pre-production, before the design document is complete, and may help determine what features the design specifies. Prototypes are developed quickly with very little time for up-front design and mostly act as a proof of concept or to test ideas. Game design[edit]

Loading XML Through XNA Content Pipeline XNA is quite possibly one of the most robust game programming frameworks out there. You can do nearly anything with it, and one of the reasons it is so flexible is its "Content Pipeline". But sometimes it can be a bit tricky to use this feature, requiring us to do bit more work. But in the end, it helps to use the Content Pipeline. Luckily today we are going over how to use it to load in some XML. games « Indie Fund Below is the list of games Indie Fund has funded so far(click on the title/image to go to the game-maker’s website!): Kachina Kachina is a whimsical physics toy that explores negative space by allowing players to manipulate a hole in the ground, swallowing up animals and spitting them back out elsewhere.

Game Development for Android: A Quick Primer [This post is by Chris Pruett, an outward-facing Androider who focuses on the world of games. — Tim Bray] If you attended Google I/O this year, you might have noticed the large number of game developers showing off their stuff in the Android part of the Developer Sandbox. Unity, EA, Com2Us, Polarbit, Laminar Research, and several others demonstrated high-end games running on Android devices. Part of my role as a Game Developer Advocate for Android is to field requests for information about Android from game developers, and in the last six months the number of requests has gone through the roof. Since there’s clearly a huge amount of interest in Android game development, here’s an overview of how Android games work and what you as a developer should know. Step One: Decide on a Target Device Class

Getting Started First things first. If you have no idea what Unity3D is go check out their website or check out the section of our site called What is Unity3D? So at this point you should be getting that Unity3D is software that you can use to make games. Ludum Dare For this mini-LD challenge, I decided to try to create a game for the original 8-bit Nintendo Entertainment System (NES). This was the first game console that I ever owned as a kid, so creating a game for it was something that I had always wanted to do. Unfortunately, to create an NES game, everything has to be written in assembly. When I was at Georgia Tech working on my computer science undergraduate degree, I did have one project where I had to write assembly code for an emulated MIPS system. The emulator was called SPIM (MIPS spelled backwards), and it looks like it is still available for download today. While writing assembly is not completely foreign to me, it definitely is not one of my favorite things to do.

XNA Tutorials - RB Whitaker's Wiki Welcome to the XNA Tutorials, the largest and easiest to use collection of XNA 4.0 tutorials on the Internet! There are plenty of other sites out there, but as far as I know they are either much smaller than this, or way out of date, which is a big deal, since so much changed in version 4.0. You may also find my MonoGame tutorials of interest. MonoGame is an open source port of XNA that runs on a very wide variety of programs, and may ultimately have a longer lifespan than XNA. About These XNA Tutorials XNA is an extremely powerful and easy to use set of tools for game making, created by Microsoft.

46 Tips & Tricks for 2D mobile Performance in Unity. If this is your first jump into the world of Unity, my first tip (this one’s a freebie) is to stop trying to use it like other languages and environments. You will be using GameObjects, you will be adding multiple script components, and you will have to think differently. When I first started, my approach was to largely ignore prefabs (or use them like Flash’s display list) and get a copy of Box2D running. Painful as it is to deviate, get ready to put in some work! Without further ado, let’s get started: 50 Tips for Working with Unity (Best Practices) About these tips (Edit: August 2016. I have revised these tips. Gregory Pennington – Game Developer » Projects Here you will find some projects I have worked on. Written in: C++ Rendered with: OpenGL Audio: WWise