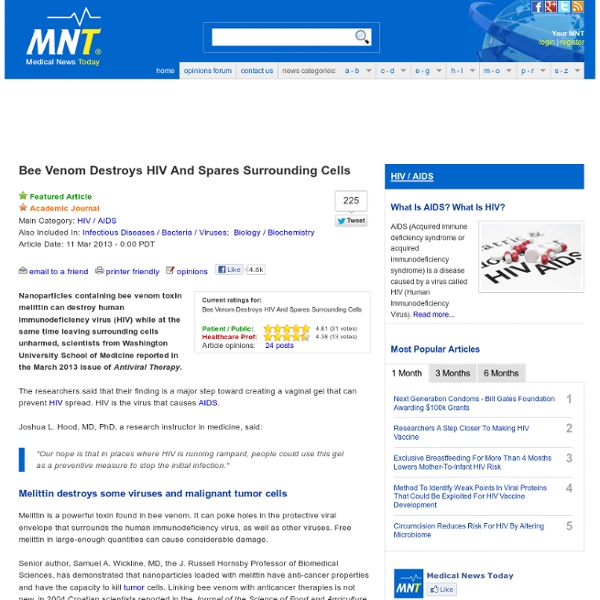 Bee Venom Kills HIV: Nanoparticles Carrying Toxin Shown To Destroy Human Immunodeficiency Virus A new study has shown that bee venom can kill the human immunodeficiency virus (HIV). Researchers at Washington University School of Medicine in St. Louis have demonstrated that a toxin called melittin found in bee venom can destroy HIV by poking holes in the envelope surrounding the virus, according to a news release sent out by Washington University. Visit Washington University's website to read more about the study. Nanoparticles smaller than HIV were infused with the bee venom toxin, explains U.S. “Melittin on the nanoparticles fuses with the viral envelope,” said research instructor Joshua L. This revelation can lead to the development of a vaginal gel to prevent the spread of HIV and, it seems, an intravenous treatment to help those already infected. The bee venom HIV study was published on Thursday in the journal Antiviral Therapy, according to U.S. This study comes on the heels of news that a Mississippi baby with HIV has apparently been cured. Also on HuffPost:

The many ways to use bentonite clay (NaturalNews) While there is evidence to suggest that healing clays have been used by humans for healing and ritual since before the discovery of fire, both the growing interest in traditional and alternative medicines, along with the ability of modern day humans to come up with more and more creative ways to use clays is causing an upsurge of interest in their application. A wide range of uses that range from clay toothpastes to cancer treatments means that healing clays such as bentonite clay are being realized by many as a useful addition to the first aid kit or medicine cabinet. Traditionally, healing clays have been consumed in clay waters, eaten as clay balls and used externally to treat skin infections. Mix bentonite clay into a thick paste with water and apply to bites or stings for almost instant relief from pain and swelling. It is important to note that bentonite clay should not come into contact with any metals and should not be mixed with chlorinated water.

Research: Eggs are a great source of protein, minerals and carotenoids (NaturalNews) The second half of the 20th century was not kind to eggs. The 1950s in particular were a time when eggs were demonized due to their high fat content, which pioneering nutritionists -- notably Ancel Keys, developer of the notorious "lipid hypothesis" -- believed would raise cholesterol and contribute toward coronary heart disease. Today, however, we understand that fatty whole foods like eggs are an essential component of a healthy diet, particularly when they come from sustainable, organic sources. In fact, eggs have been a staple breakfast for people in many cultures for centuries. Note: Though eggs are not explicitly linked to weight loss, their high protein content makes us feel full for longer, discouraging overeating. Eggs are one of the best dietary source of choline, a B vitamin that is a constituent of lecithin. Other B vitamins contained in eggs include thiamin, riboflavin, B6, B12, folate and pantothenic acid. Sources for this article include:

3 simple ways to improve brain health Fri. Jan. 24, 2014 by Sima Ash, CHom, CNC (NaturalHealth365) Approximately 5.4 million Americans are currently diagnosed with Alzheimer’s disease and this number is expected to triple by 2050. In addition, the rate of children with autism is said to be 1 in 50 throughout the United States. What is happening to our collective brain health? Think about the importance of our memories – which are a crucial part of our social lives. According to Psychology Today, the brain thrives on fat-rich, low-carbohydrate foods. The Mayo Clinic found that people who favor carbohydrates have an 89% increased risk for developing dementia as contrasted to those whose diets contained the most fat. Healthy fats consist of avocado, coconut oil, extra-virgin olive oil, flax seed oil, olives, fatty fish, nuts and seeds. Many studies show that omega-3 is extremely beneficial for brain health. Aequorea Victoria – which comes from jellyfish – is demonstrating wonderful results in Alzheimer’s patients.

What if you found the Holy Grail of Natural Medicine? Dr. Rima LaibowNatural Solutions Foundation Well, if you were the US Fraud and Death Administration, you would demonize it with all of your might, pretending that it was ineffective, dangerous and bad for the world. You would get your buddies in other agencies, including the Justice Department, to criminalize the good stuff and legitimize the stuff your Big Pharma buddies hawk which actually IS ineffective, dangerous and bad for the world. Of course the underground (internet, scuttlebutt, youtube) would have lots going on about it, but quality, reliability and availability would be serious problems for the Health Seeker (HS). But I believe I actually may have found the Holy Grail of Natural Medicine and it is legal, GMO-free, clean and powerful. Now that does not mean that the Fraud and Death Administration is happy about the existence, and the legal status, no less, of the Holy Grail! But the reality of the safety and efficacy of this wonder substance is there for all to see. Notes:

6630507 Cannabinoids have been found to have antioxidant properties, unrelated to NMDA receptor antagonism. This new found property makes cannabinoids useful in the treatment and prophylaxis of wide variety of oxidation associated diseases, such as ischemic, age-related, inflammatory and autoimmune diseases. The cannabinoids are found to have particular application as neuroprotectants, for example in limiting neurological damage following ischemic insults, such as stroke and trauma, or in the treatment of neurodegenerative diseases, such as Alzheimer's disease, Parkinson's disease and HIV dementia. Nonpsychoactive cannabinoids, such as cannabidoil, are particularly advantageous to use because they avoid toxicity that is encountered with psychoactive cannabinoids at high doses useful in the method of the present invention.

Guide to Drug-Free Back Pain Relief When you have back pain, it can take over your life. Whatever it was that put your back out of whack, all you want now is relief from the pain...and the idea of strong pain drugs, or even surgery, looks mighty tempting. Hold on! Painkillers, especially narcotics, have dangerous side effects...and the drugs won't cure the cause of your back pain. And while an operation might help, very often it makes the pain worse—but you won’t know that until it’s too late. Good news: There are many nondrug, nonsurgical treatments that banish back pain safely. The Right Moves…Stretches and Exercises Touch That Heals…and More Fractures, Scoliosis, Surgery… Listing Details Publication Daily Health News Original publication date March 24, 2014 Publication: Original publication date:

Far infrared sauna helps detoxify the body Wed. Dec. 11, 2013 by Dr. David Jockers (NaturalHealth365) The modern world is full of environmental toxins and all of us are filled with these deadly poisons. It is estimated that there are over 80,000 toxic chemicals used regularly in the United States. The major detoxification organs in the body include the liver, kidneys, skin, respiratory system, gastrointestinal system and urinary tract. By using the infrared sauna – one can help the body to maximize toxic elimination through perspiration. Far Infrared technology (FIR) is a non-invasive form of light therapy that penetrates the body as much as three inches. This heat helps the organs and tissues push toxins into the bloodstream – where they can be eliminated through the perspiration process. Infrared wavelengths have the ability to stimulate multiple pathways in the body. FIR technology can penetrate between 1 ½ – 3 inches into the surface of the body. Perspiration is one of the best ways to eliminate toxins from the body.

Health Secrets From Around the World: What You Can Learn From the World’s Healthiest Cultures HJ: If your goal is to be healthy, then it makes sense to study the world’s healthiest people and cultures, right? Clearly they must be doing something right… But I would like to take the opportunity here to highlight the role of belief in health, because this is a very important factor that often times gets overlooked in articles focusing solely on physical health. The fact is that many of these cultures have very strong and beneficial beliefs around their lifestyles and health due to strong cultural traditions reinforcing the benefits of living in such a way. Beyond that, these are certainly excellent tips for living a healthy, robust life. - Truth Health Secrets From Around The World By April McCarthy | Prevent Disease There are many places around the world where people live longer and know how to be happier than the rest of us. Researchers have long tried to understand why some regions are much healthier than others. Lessons from the Okinawans: Lessons from Ikaria: Lessons from Sardinia: