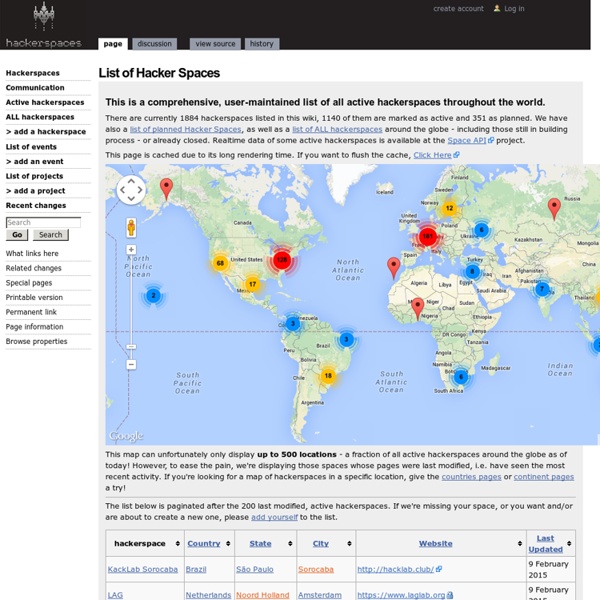 Using the design process In engineering, programming, web design and most other creative work, many people consciously use The Design Process. The PBS show Design Squad provides some great examples of how people can work with this system. There are also plenty of resources for working with students and other learners on their site. Fully Functional Television Oscilloscope This project involves working in close proximity to the television's exposed flyback transformer and high voltage capacitors, which are both potentially lethal devices if you do not take proper safety precautions. First, the obvious step: Is it plugged in? Unplug it! Isn't it funny that this is the exact opposite of what a tech normally tells you... When you remove the shroud, be careful not to rip any wires from the circuit board, and do not touch any of the exposed contacts.

Biohackers Are Growing Real Cheese In A Lab, No Cow Needed If you're a vegan, cheese options are limited. There are high-quality vegan cheeses out there, but they just don't taste the same, and they're mostly soft-- it's difficult to make any sort of hard vegan cheese, like gouda or cheddar. A team of Bay Area biohackers is trying to create a new option: real vegan cheese. That is, cheese derived from baker's yeast that has been modified to produce real milk proteins. Passionate about communities It's time to write history with CMNTY Story. Revolutionize the way you see your community. CMNTY Platform 2.4 The most advanced community platform available.

An Easy 3D Modeling Software - Ading flavour to STEM Education with childrens desktop engineering. Learning in the area of design and technology and math needs a practical basis; investigating, evaluating, calculating, designing and doing. While children are familiar with word-processors, spreadsheets and databases, using tabs enables them to encounter the computer as a 3D design and manufacturing tool as well. It is an easy 3D modeling software for primary and secondary school classrooms and is used widely in both Design and Technology and Mathematics classes. It is wise to start designing with something very simple. Online : $8,000 DIY satellite kit This is fascinating. If hackerspaces can buy an $8,000 laser cutter, why not send a satellite into orbit? Interorbital Systems (IOS) says it can deploy 32 tiny satellites simultaneously from a rocket launched from the Pacific island of Tonga. The price?

FabLabs Welcome to Fablabs.io! Here are few suggestions about how we can help you and how you can participate and talk with us if you have any question or problem regarding the Fablabs.io platform. Discuss with the community Gear Up! Top 10 Places to Find DIY Supplies Home Depot, Michael’s, and other big-box stores are the go-to if you’re looking for a claw hammer or knitting needles, but what if you’re looking for an Erlenmeyer flask to use as a wine decanter? For just such cases, we created this bookmark-worthy list of web-based retailers that traffic in obscure tools and artisanal materials. Whether you’re a proto-Banksy looking for quality spray paint, a green-thumb on the hunt for exotic seeds, or a rookie robot-builder who needs a PCB, you’ll find what you need at one of these stores. Smooth-On What You Can Buy: Plastic molding supplies used for sculpture, props, architecture and more. Smooth-On makes hard plastics, soft rubbers, foams and novelty compounds that you can shape to match your creative vision.

Hack: Android on iPhone This could be the one of the very big news for linux lovers that now you will be able to run Android on iPhone successfully. As everyone know that Apple developed one of the very best mobile operating system for iPhone but may be that wasn’t working for few people who later on decided to make something which could install Android (Google’s mobile operating system) on iPhone. When the talks started, lots of people was very much sure that it’s not possible to run android on iPhone, but David Wong, also known as “planetbeing”, proved it wrong and he finally achieved what many geeks have been dreaming from long. Below is the video of given by David Wong in which he explained how to install Android on iPhone step by step: In the video, Wong shows the full procedure and compatibility of the iPhone and the Android platform working together.

DIY Methane Generator You can make biogas energy with a DIY methane generator. Producing methane from manure using your own small scale waste to energy biogas digester is feasible for many small farms. What is Biogas Energy? Biogas energy is fueled by burning methane produced by the decomposition of organic wastes. Small scale biogas generator