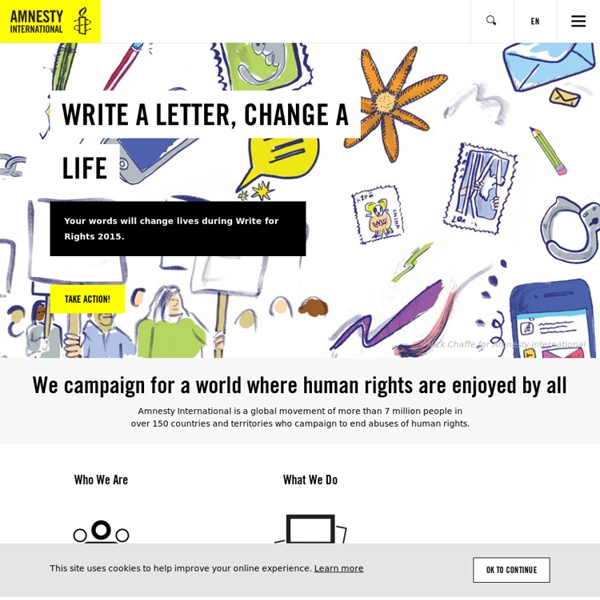 Video // Current To Our Faithful Current.com Users: Current's run has ended after eight exciting years on air and online. The Current TV staff has appreciated your interest, support, participation and unflagging loyalty over the years. Your contributions helped make Current.com a vibrant place for discussing thousands of interesting stories, and your continued viewership motivated us to keep innovating and find new ways to reflect the voice of the people. We now welcome the on-air and digital presence of Al Jazeera America, a new news network committed to reporting on and investigating real stories affecting the lives of everyday Americans in every corner of the country.

Voices of Youth: Human Rights Government of Liberia Bureau of Immigration officials register asylum-seekers from Côte d’Ivoire in the town of Loguatuo, in Nimba County. © UNICEF/NYHQ2010-2753/Bill Diggs What are human rights? Human rights are fundamental rights and freedoms to which every human being is entitled. These rights include individual, political, civil, spiritual, social, economic and cultural rights that help us to develop to our fullest potential. Human rights are universal – they apply to all people, everywhere. Wikileaks defies 'great firewall of China' Whistleblower website Wikileaks has made 35 censored videos of civil unrest in Tibet available in a bid to get round the "great firewall of China". Wikileaks said that posting the videos was a "response to the Chinese Public Security Bureau's carte-blanche censorship of YouTube, the BBC, CNN, the Guardian and other sites" that had carried sensitive video footage about Tibet. Wikileaks, which earlier this month successfully saw off legal action that threatened to shut the website, is calling on bloggers to post footage to help it circumvent the Chinese internet censorship. China's internal censorship of online and TV coverage of the unrest in Tibet has drawn heavy criticism.

United Nations: Human Rights A school girl at the Sitara School in Kabul pushes her classmate, a double-leg land-mine amputee in a wheelchair. The Convention on the Rights of Persons with Disabilities was adopted on 13 December 2006. UN Photo/Hassan Zakizada UN Bodies General Assembly Third Committee (Social, Humanitarian and Cultural) Documents, press releases, related links. Pirate Fishing - People & Power The precious marine resources of some of the world's poorest people are being targeted by industrial-scale pirate fishing operations, to feed the seafood hungry markets of Europe and Asia. The problem is particularly acute in West African waters where fish is a vital - and often the only - protein source for millions of people. In a special two-part investigation, People & Power sets out to identify and expose some of those involved in the multi-million dollar trade and to look in particular at its consequences for the impoverished West African nation of Sierra Leone.

The Top 25 Sites to Watch Free Movies and TV Online ~ ButterBlog online without download by streaming movies and tv! Below you will be able to see each site rated by design, how many good links they have, the quality and quantity of the videos, their community, and update consistency. Hopefully it makes it easier for you to find a free movie site that you'll enjoy. Find your favorite websites to watch free movies today! Top 6 Sites that Inspire and Educate If you’re a professional who likes to be intellectually stimulated and you enjoy keeping up with the latest news and breaking trends, the internet provides you with an endless choice of carefully curated sites to visit. Today, we bring you six of them that we believe are leaps and bounds above the rest. These sites will not only educate you on topics ranging from business and technology to art and design, they’ll motivate you to find your own, original ideas and see them through. They’re culturally relevant, they’re idea driven and most of all, they’re deeply inspirational. TED is short for three incredibly important subjects in our modern world; technology, entertainment and design.

United for Human Rights United for Human Rights (UHR) is an international, not-for-profit organization dedicated to implementing the Universal Declaration of Human Rights at local, regional, national and international levels. Its membership is comprised of individuals, educators and groups throughout the world who are actively forwarding the knowledge and protection of human rights by and for all Mankind. Its purpose is to provide human rights educational resources and activities that inform, assist and unite individuals, educators, organizations and governmental bodies in the dissemination and adoption of the Universal Declaration of Human Rights at every level of society. United for Human Rights was founded on the Declaration’s 60th anniversary, in the face of continued worldwide abuses which violate the spirit, intent and Articles of this charter of all human rights, the first such document ever ratified by the community of nations.

2010–2011 Greek protests The 2010–12 Greek protests were a series of demonstrations and general strikes taking place across Greece. The protests, which began on 5 May 2010, were sparked by plans to cut public spending and raise taxes as austerity measures in exchange for a €110 billion bail-out, aimed at solving the 2010–2011 Greek debt crisis. Three people were killed in the protests of 5 May, one of the largest in Greece since 1973. On 25 May 2011 (2011-05-25), anti-austerity protestors organised by the Direct Democracy Now! movement, known as the Indignant Citizens Movement (Greek: Κίνημα Αγανακτισμένων Πολιτών, Kínima Aganaktisménon-Politón), started demonstrating in major cities across Greece.

Top 6 Sites to Find Cool Gadgets and Gear & Life Scoop Whether you’re an early adopter who gets excited about purchasing the latest tech toy, or you’re a busy professional looking to find the perfect gift, everyone knows that searching for products can be a long and frustrating experience. Lucky for us, we now have top-tier websites who can guide us through it all. Today, we’ve chosen six that not only possess expert knowledge, they have the discerning, carefully curated eye that we can rely on to give us the best products that fit our own, personal style. From the more tech-savvy blogs like Engadget and CrunchGear to the design-centric websites like Uncrate and Coolhunting, we’re confident that these sites will help you find exactly what you’re looking for. 1. Engadget