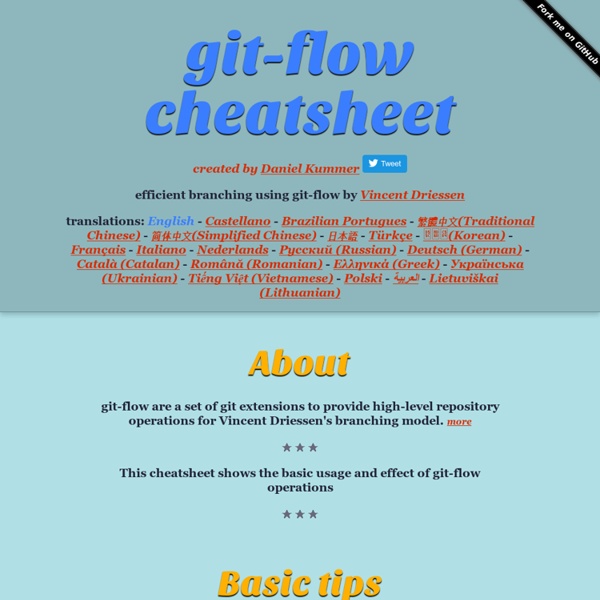 Popping Out of Hidden Overflow The following is a guest post by Agop Shirinian. Agop ran into an interesting scenario where he needed an element to be scrollable in one direction, while allowing the overflow in the other direction. You'd think that's what overflow-x and overflow-y are for, but it's not that simple. I'll let Agop explain. So you're tasked with creating a scrollable menu with submenus that pop out when you hover over a parent menu item. Simple! A successful Git branching model » nvie.com In this post I present the development model that I’ve introduced for some of my projects (both at work and private) about a year ago, and which has turned out to be very successful. I’ve been meaning to write about it for a while now, but I’ve never really found the time to do so thoroughly, until now. I won’t talk about any of the projects’ details, merely about the branching strategy and release management. It focuses around Git as the tool for the versioning of all of our source code. (By the way, if you’re interested in Git, our company GitPrime provides some awesome realtime data analytics on software engineering performance.)

Understanding the GitHub Flow · GitHub Guides GitHub Flow is a lightweight, branch-based workflow that supports teams and projects where deployments are made regularly. This guide explains how and why GitHub Flow works. Create a branch When you're working on a project, you're going to have a bunch of different features or ideas in progress at any given time – some of which are ready to go, and others which are not. What is Your Branching Model? Note: At no point are we asking about local branching (on your local workstation with Git, etc). This is all about branching on the remote repository. That is if your company has one, and isn’t completely distributed, with no central repo.

Cookie-based Authentication in AngularJS Single Page Apps are ruling the world and AngularJS is leading the charge. But many of the lessons we learned in the Web 2.0 era no longer apply, and few are as drastically different as authentication. Depending on where you build and release your AngularJS app, there are different ways to handle authentication and I hope this post clears some of that up. CORS is an oft-misunderstood feature of new browsers that is configured by a remote server. Explain Git with D3 We are going to skip instructing you on how to add your files for commit in this explanation. Let's assume you already know how to do that. If you don't, go read some other tutorials. Pretend that you already have your files staged for commit and enter git commit as many times as you like in the terminal box. git tag name will create a new tag named "name". Creating tags just creates a new tag pointing to the currently checked out commit.

GitHub Flow – Scott Chacon August 31, 2011 Issues with git-flow I travel all over the place teaching Git to people and nearly every class and workshop I’ve done recently has asked me what I think about git-flow. Git Workflows and Tutorials The array of possible workflows can make it hard to know where to begin when implementing Git in the workplace. This page provides a starting point by surveying the most common Git workflows for enterprise teams. As you read through, remember that these workflows are designed to be guidelines rather than concrete rules.

A JavaScript library for building user interfaces A Simple Component React components implement a render() method that takes input data and returns what to display. This example uses an XML-like syntax called JSX. Input data that is passed into the component can be accessed by render() via this.props.

The Configuration File - "Branch" Section Commands used in this section: git clonegit fetchgit merge The “branch” Section Of The Config File Let’s look at the config file for the git client that did the git clone in the Git Remotes Behind the Scenes: “Tracking Branches” and “Remote-Tracking Branches” section. After the git clone command is done, the contents of the .git/config file is created, as shown below: $ git clone Initialized empty Git repository in ... GitFlow considered harmful GitFlow is probably the most popular Git branching model in use today. It seems to be everywhere. It certainly is everywhere for me personally - practically every project at my current job uses it, and often it's the clients themselves who have chosen it. I remember reading the original GitFlow article back when it first came out.

Easier Nested Layouts in Rails 3/4 A layouts recap Any non-trivial web application will have multiple HTML layouts. For example, a login page may use a simple layout with no header and footer, whereas authenticated pages will have navigation bars and breadcrumbs. SourceTree for Windows 1.5 By Kieran Senior on April 7, 2014 With SourceTree 1.4.0 for Windows released just a few weeks ago, we’re excited to announce that 1.5.0 is ready to go. We’ve been steadily playing catchup with the Mac version and we’re happy to ship some highly requested features. Interactive rebase The interactive rebase feature is now available on SourceTree for Windows.

Follow-up to 'GitFlow considered harmful' My previous post, in which I explained what I disliked about GitFlow, generated a lot of feedback on /r/programming, HackerNews, Twitter and in the comments section of the article itself. I like to thank everybody who took the time to read the post and maybe write a response - it's been great knowing that a lot of you have had similar experiences to mine, and even better finding out that for some people, those things that bug me are not a problem at all (I devote a whole section to that issue below). While reading and responding to the comments, there were a few cases where the same issues would keep popping up again and again, which indicates to me that I did not make myself clear enough in a couple of places.