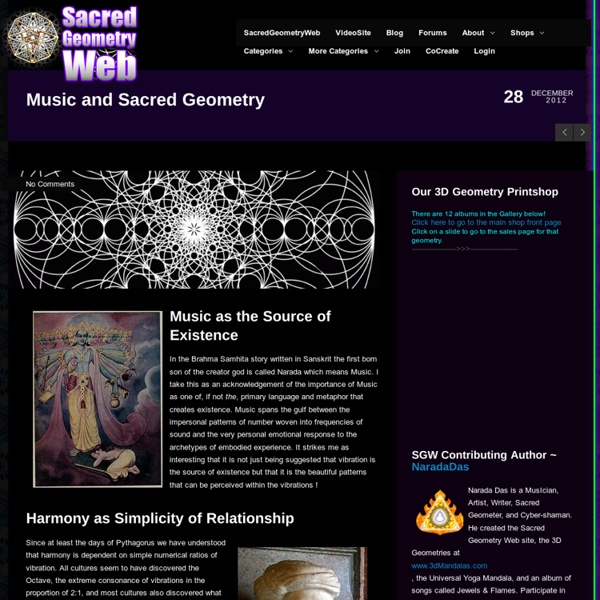 In the Brahma Samhita story written in Sanskrit the first born son of the creator god is called Narada which means Music. I take this as an acknowledgement of the importance of Music as one of, if not the, primary language and metaphor that creates existence. Music spans the gulf between the impersonal patterns of number woven into frequencies of sound and the very personal emotional response to the archetypes of embodied experience. It strikes me as interesting that it is not just being suggested that vibration is the source of existence but that it is the beautiful patterns that can be perceived within the vibrations ! Since at least the days of Pythagorus we have understood that harmony is dependent on simple numerical ratios of vibration. All cultures seem to have discovered the Octave, the extreme consonance of vibrations in the proportion of 2:1, and most cultures also discovered what we call the ‘fifth’ created by proportions of 3:1. Ani Williams – Geometry, Music and Healing

The Platonic Solids and Sacred Geometry Sacred geometry is a term which describes ... The geometrical laws which create everything in existence. This term has been used by mathematicians, geometricians, spiritual seekers, anthropologists, and archaeologists to encompass the religious, philosophical, and spiritual beliefs that have sprung up around geometry in all the major cultures during the course of human history. Every thought or emotion we produce has a specific geometrical pattern. The more we evolve spiritually the more we see the connection between human evolution and sacred geometry. The really hidden Kabala, and the real hidden meanings behind all the major religions is sacred geometry.

The revival of an ancient science At the other end of the scientific spectrum of contemporary science an ancient science is being restored. For ages it has been preserved carefully. It is more or less an art form and it is called ‘sacred geometry’. Why sacred, what is so sacred about geometry? The Flower of Life The flower of life holds a secret through which one can discover the most important and sacred pattern in the universe. This is the source of all that exists; it’s called the Fruit of Life. It contains 13 informational systems. Each one explains another aspect of reality. Thus these systems are able to give us access to everything ranging from the human body to the galaxies. In the first system, for example, it’s possible to create any molecular structure and any living cellular structure that exists in the universe.

The Miracle of 528 Hz Solfeggio & Fibonacci Numbers Solfeggio tones create music to calm an overactive mind and send us towards connecting with the divine. According to Dr. Leonard Horowitz, 528 Hertz is a frequency that is central to the “musical mathematical matrix of creation.” More than any sound previously discovered, the “LOVE frequency” resonates at the heart of everything. It connects your heart, your spiritual essence, to the spiraling reality of heaven and earth. The Love frequency is the “Miracle” note of the original Solfeggio musical scale. 40 websites that will make you cleverer right now The indexed web contains an incredible 14 billion pages. But only a tiny fraction help you improve your brain power. Here are 40 of the best. whizzpast.com – Learn about our awe inspiring past all in one wonderful place. khanacademy.org – Watch thousands of micro-lectures on topics ranging from history and medicine to chemistry and computer science. freerice.com – Help end world hunger by correctly answering multiple-choice quizzes on a wide variety of subjects.

RodinAerodynamics.org - Marko Rodin - Rodin Coil -- Introduction -- Hopefully this will enable people to understand "why" there is only "one" truth and how we can all move forward in learning more about the "nature" of what that one truth is and why no single person or group of people can be the "owner" of the one truth and that literally everyone has a piece of the "enlightening" puzzle which is like a riddle, wrapped in a mystery, inside an enigma. -- Substance -- I just figured out a great example of how two seemingly very different points of view can be demonstrated to have not only similarity but symmetricality to the point that they are saying or expressing almost, if not totally, the same exact thing! :o)