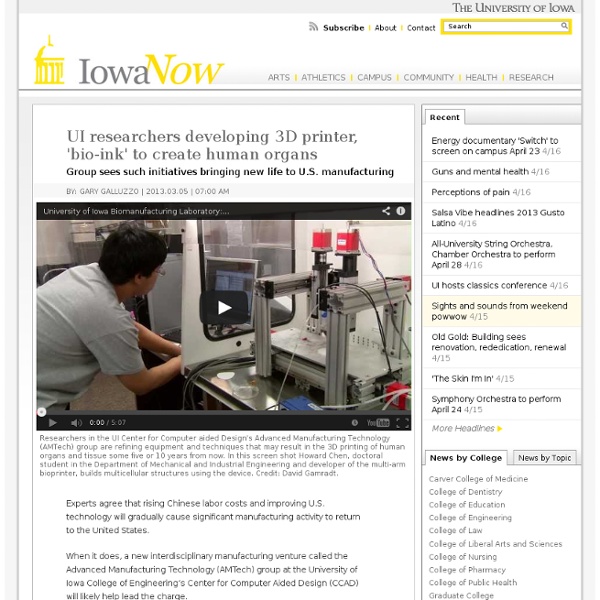 Experts agree that rising Chinese labor costs and improving U.S. technology will gradually cause significant manufacturing activity to return to the United States. When it does, a new interdisciplinary manufacturing venture called the Advanced Manufacturing Technology (AMTech) group at the University of Iowa College of Engineering’s Center for Computer Aided Design (CCAD) will likely help lead the charge. AMTech was formed to design, create, and test—both virtually and physically—a wide variety of electromechanical and biomedical components, systems and processes. Currently, the group is working on projects ranging from printed circuit boards for automobiles and aircraft to replacement parts for damaged and failing human organs and tissue, says Tim Marler, AMTech co-director. “Electromechanical systems are one of two current branches of the AMTech group,” he says. In fact, the multi-arm bio printer being used in the lab is unique.

A 3D Printer Debuts at Williams | Williams College “3D printing is going to be pervasive in the future, and I want to be able to say I was involved from the first,” says sophomore Christine M. Cunningham ’15, a likely computer science major. As one of the team of 10 students that worked with design engineer and model maker Michael Taylor and computer science professor Morgan McGuire to build a 3D printer during Winter Study, Cunningham has reason to be proud. Christine Cunningham ’15, Morgan McGuire, Michael Taylor, and Sam Donow ’16. 3D printing, also known as desktop fabrication, is being used to produce components in a variety of industries from the medical industry to toy manufacturers. As the head moves back and forth along the square glass plate, the first layer of blue plastic is laid down in the shape of an airplane, line by line, slowly moving back and forth, up and down, and around the glass. The students built this printer from directions they cobbled together through open-source materials.

3D Rapid Prototyping § Printing a 3D model directly from a computer file has become a popular process for model-making and prototyping at the GSD. Generally, a "watertight" mesh digital model is necessary for any printing operation - no open edges or seams. 3D printed models are still subject to the forces of gravity and self-weight, so although a 3D printer can print just about any closed geometric entity, that is no guarantee the printed part will be able to stand on its own or be handled. Users are advised to consider this when creating their models for 3D printing and when selecting which printer technology to use. The GSD has three different printer technologies available: ZCorp Printers The Zcorp 3D Printer was the first rapid prototyping tool brought to the design school, and it remains the most widely used given the relative speed and consumable cost of the technology. Details: Dimension ABS Printer Eden Polyjet 500v

3D Print Lab - School of Engineering Education 3D Printer Information The Ideas to Innovation Laboratory has two Objet Eden350 and one Objet Eden350V 3D Printers. These printers are based on Objet's PolyJet photopolymer jetting technology that builds horizontal layers of 16-microns (0.0006 in) of model resin and support material, which is cured using ultraviolet light. Both the Eden350 and Eden350V print in High Quality mode, with X and Y resolutions of up to 600 dpi, allowing rapid production of models with very fine details. Printing Costs The cost of printing is based upon the amount of material used by weight (includes model resin and support material). Model Materials The I2I Lab stocks the following model resins and support material: Additional model resins can be ordered upon request from Objet's Website. Model Dimensions The Eden350 and Eden350V printers have a tray size of 350 (X) x 350 (Y) x 200 (Z) mm (13.8 x 13.8 x 7.9 in) which offers the flexibility to produce a single large model or multiple smaller models in one build.

OEDK - Rice University - 3D Printer 3-D Printer The 3-D printer is a rapid prototyping machine for making plastic prototypes from CAD models. The item is printed using Acrylonitrile Butadiene Styrene (ABS) plastic and a support material, allowing for complicated 3-D shapes. It can easily and fairly rapidly create 3-D models from computer files created using SolidWorks®, IronCAD®, or virtually any other 3-D rendering suite. The resolution of the machine is 0.02 inches in the x, y, and z directions. Before you use the 3-D printer, there are several things to consider. Format The file you need in order to operate the 3-D printer is an .stl file. Budget To start with, there is a $5.00 processing charge for use of the plastic base and sodium hydroxide bath. Scheduling and Patience Although you do not have to pay for time on the machine, printing parts can take hours. You can expect a minimum of one day processing time prior to the commencement of printing. Necessity

ZCorp 3D Printer | ARC 3D printing orientations have been added and are required for anyone wishing to use the 3D printers. Sign up is here 3D printing prices are as follows: MakerBot – $4.00 per cubic inch (or students can purchase their own filaments spools, and use the MakerBots free of charge MakerBots) Zcorp – $5.00 per cubic inch Objet24 – $0.30 per gram of BUILD material + $0.15 per gram of SUPPORT material Mcor Iris – $3.00 per cubic inch DOWNLOAD A ZCORP FILE SUBMISSION FORM HERE: Zcorp_Form_2014 Nanoengineers can print 3D microstructures in mere seconds San Diego, Calif., September 13, 2012 – Nanoengineers at the University of California, San Diego have developed a novel technology that can fabricate, in mere seconds, microscale three dimensional (3D) structures out of soft, biocompatible hydrogels. Near term, the technology could lead to better systems for growing and studying cells, including stem cells, in the laboratory. Long-term, the goal is to be able to print biological tissues for regenerative medicine. For example, in the future, doctors may repair the damage caused by heart attack by replacing it with tissue that rolled off of a printer. Reported in the journal Advanced Materials, the biofabrication technology, called dynamic optical projection stereolithography (DOPsL), was developed in the laboratory of NanoEngineering Professor Shaochen Chen.

MakerBot, an inexpensive, easy-to-build 3D printer I just saw this piece in the weekly print edition of the Christian Science Monitor. It's a great overview of a lot of the offerings out there. In Your idea, "printed" in 3-D, Jesse Emspak writes: At its heart, this style of "rapid prototyping" relies on a simple concept: building an object one cross section at a time, similar to laying down LEGO bricks to make a larger shape. The field is still very young, says Scott Harmon, vice president of business development at Z Corporation. Several companies make these three-dimensional printers, the cheapest of which sells for about $10,000. The products they mention are priced out of reach for most of us, but there is an offering they didn't mention, the MakerBot CupCake CNC, a cheap ($750) rapid prototyper that you can build yourself. DIY rapid prototyping has come a long way: both Fab@Home and RepRap promise inexpensive rapid prototyping, and are open source hardware designs.

Adding a '3D print' button to animation software G.I. Joe may have finally met his match. (Photo courtesy of Moritz Bächer.) Cambridge, Mass. - July 31, 2012 - Watch out, Barbie: omnivorous beasts are assembling in a 3D printer near you. A group of graphics experts led by computer scientists at Harvard have created an add-on software tool that translates video game characters—or any other three-dimensional animations—into fully articulated action figures, with the help of a 3D printer. The project is described in detail in the Association for Computing Machinery (ACM) Transactions on Graphics and will be presented at the ACM SIGGRAPH conference on August 7. Besides its obvious consumer appeal, the tool constitutes a remarkable piece of code and an unusual conceptual exploration of the virtual and physical worlds. "In animation you're not necessarily trying to model the physical world perfectly; the model only has to be good enough to convince your eye," explains lead author Moritz Bächer, a graduate student in computer science at SEAS.