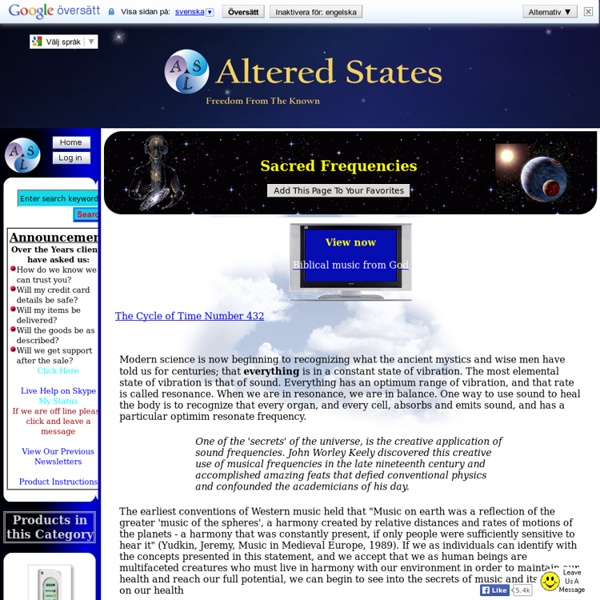 Modern science is now beginning to recognizing what the ancient mystics and wise men have told us for centuries; that everything is in a constant state of vibration. The most elemental state of vibration is that of sound. Everything has an optimum range of vibration, and that rate is called resonance. The earliest conventions of Western music held that "Music on earth was a reflection of the greater 'music of the spheres', a harmony created by relative distances and rates of motions of the planets - a harmony that was constantly present, if only people were sufficiently sensitive to hear it" (Yudkin, Jeremy, Music in Medieval Europe, 1989). It is said that our planet beats from 7.82-8 cycles per second (7.82-8 hz, fundamental Schumann resonance), 8 hz is the alpha brain wave rhythm in which our parallel processors, or brain hemispheres, are synchronized to spin together equally. " Ordinary" awareness brain waves ranges from 14-40 hz. Dr. Enhance, Heal, & Rejuvenate What is DNA? Dr. Dr. Related:  Videos

Binaural Beats | Mr Meditation This article is designed to give you some insight into the relatively new technology of Binaural Beats. Binaural Beats are specific frequencies that can bring you into a profoundly deep state of meditation within minutes using the latest innovations in sound technology. They utilize a specific audio mixing technique designed to alter the listener’s brain wave activity. By sitting or lying down in a quiet environment and wearing headphones these beats can be used to create Alpha, Theta and Delta brainwave patterns. When brainwave patterns change it has been documented that there is also a change in chemical reactions within the body which can have a profound effect on your entire physical structure. In effect these beats have the same impact and benefits of a deep meditative state akin to hypnologic trance or transcendental mediation. An added benefit of using such technology is that the states it creates allow you to access the subconscious parts of the mind. 1. However, it was Dr.

Give Up the Blame Game. Be Your Own HERO! When you blame, you become lame. Blaming keeps you stuck in the same game of repetitive patterns. You simply give your power away to that which you blame and allow it to control your freedom. Who or what are you blaming in your life? Parents.Government.Friends.Employer.Weather. Things do happen in life that are painful. This is true. But to hold onto the anger and resentment simply keeps you stuck in the past. Sometimes, we create a story about what happened or should have happened. When you blame, you choose to be a victim. When you blame, you dishonor yourself and how strong you really are. When you blame, you also dishonor those at whom you point the finger, forgetting who they really are and the lessons you are meant to learn. To continue blaming can be an excuse for actually doing something to change your current situation and yourself. You always have a choice in any given moment as to how to respond, and it’s those choices in your past that have created your current situation. Love.Now