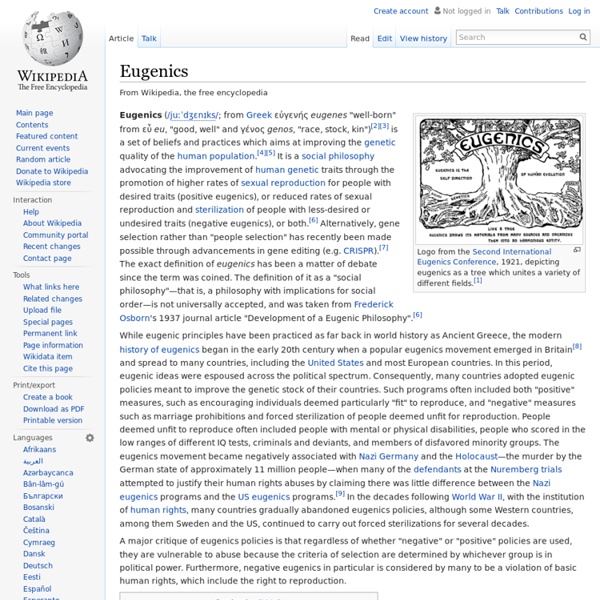 While eugenic principles have been practiced as far back in world history as Ancient Greece, the modern history of eugenics began in the early 20th century when a popular eugenics movement emerged in Britain[8] and spread to many countries, including the United States and most European countries. In this period, eugenic ideas were espoused across the political spectrum. Consequently, many countries adopted eugenic policies meant to improve the genetic stock of their countries. Such programs often included both "positive" measures, such as encouraging individuals deemed particularly "fit" to reproduce, and "negative" measures such as marriage prohibitions and forced sterilization of people deemed unfit for reproduction. People deemed unfit to reproduce often included people with mental or physical disabilities, people who scored in the low ranges of different IQ tests, criminals and deviants, and members of disfavored minority groups. History[edit] Some, such as Nathaniel C. Ethics[edit]

The Georgia Guidestones - Another Gateway Into The New World Order/New Civilisation Enclosure For The Sheeple by Arthur Cristian "LET THESE BE GUIDESTONES TO AN AGE OF REASON" - TheGeorgiaGuideStones.com "A letter in stone to the editor of history, unsigned, and an inspiration to mischief" The message of the Georgia Guide Stones Bill Gates William Henry "Bill" Gates III (born October 28, 1955) is an American business magnate, philanthropist, investor, computer programmer, and inventor.[3][4] Gates is the former chief executive and chairman of Microsoft, the world’s largest personal-computer software company, which he co-founded with Paul Allen. He is consistently ranked in the Forbes list of the world's wealthiest people[5] and was the wealthiest overall from 1995 to 2009—excluding 2008, when he was ranked third;[1] in 2011 he was the wealthiest American and the world's second wealthiest person.[6][7] According to the Bloomberg Billionaires List, Gates became the world's richest person again in 2013, a position that he last held on the list in 2007.[8] As of April 2014, he is the richest.[1] During his career at Microsoft, Gates held the positions of CEO and chief software architect, and remains the largest individual shareholder, with 6.4 percent of the common stock.[a] He has also authored and co-authored several books.

Nietzsche Quotes: Will to Power Suppose nothing else were "given" as real except our world of desires and passions, and we could not get down, or up, to any other "reality" besides the reality of our drives--for thinking is merely a relation of these drives to each other: is it not permitted to make the experiment and to ask the question whether this "given" would not be sufficient for also understanding on the basis of this kind of thing the so-called mechanistic (or "material") world?... In the end not only is it permitted to make this experiment; the conscience of method demands it. Not to assume several kinds of causality until the experiment of making do with a single one has been pushed to its utmost limit (to the point of nonsense, if I may say so)... from Beyond Good and Evil, s.36, Walter Kaufmann transl. from The Will to Power, s.635, Walter Kaufmann transl.

The Horrifying American Roots of Nazi Eugenics Hitler and his henchmen victimized an entire continent and exterminated millions in his quest for a co-called "Master Race." But the concept of a white, blond-haired, blue-eyed master Nordic race didn't originate with Hitler. The idea was created in the United States, and cultivated in California, decades before Hitler came to power. California eugenicists played an important, although little known, role in the American eugenics movement's campaign for ethnic cleansing. Eugenics was the racist pseudoscience determined to wipe away all human beings deemed "unfit," preserving only those who conformed to a Nordic stereotype. The Holocaust The Holocaust (from the Greek ὁλόκαυστος holókaustos: hólos, "whole" and kaustós, "burnt")[2] also known as Shoah (Hebrew: השואה, HaShoah, "the catastrophe"; Yiddish: חורבן, Churben or Hurban, from the Hebrew for "destruction"), was the mass murder or genocide of approximately six million Jews during World War II, a programme of systematic state-sponsored murder by Nazi Germany, led by Adolf Hitler and the Nazi Party, throughout the German Reich and German-occupied territories.[3] Of the nine million Jews who had resided in Europe before the Holocaust, approximately two-thirds were killed.[4] Over one million Jewish children were killed in the Holocaust, as were approximately two million Jewish women and three million Jewish men.[5] A network of over 40,000 facilities in Germany and German-occupied territory were used to concentrate, hold, and kill Jews and other victims.[6] The persecution and genocide were carried out in stages. Etymology and use of the term Distinctive features Origins

9 legal weapons of mass destruction Tue. Mar. 18, 2014 by Jonathan Landsman (NaturalHealth365) Our political leaders run around looking for ‘weapons of mass destruction’ and pretend to care about our welfare. Yet, the real threats are in plain sight, supported by the same political leaders placed in power to defend their constituents. Warren Buffett Buffett is called the "Wizard of Omaha" or "Oracle of Omaha",[8] or the "Sage of Omaha"[9] and is noted for his adherence to value investing and for his personal frugality despite his immense wealth.[10] Buffett is a notable philanthropist, having pledged to give away 99 percent[11] of his fortune to philanthropic causes, primarily via the Gates Foundation. On April 11, 2012, he was diagnosed with prostate cancer,[12] for which he successfully completed treatment in September 2012.[13] Early life Buffett's interest in the stock market and investing dated to schoolboy days he spent in the customers' lounge of a regional stock brokerage near his father's own brokerage office. On a trip to New York City at age ten, he made a point to visit the New York Stock Exchange. Business career

Upanishads The Upanishads (/uːˈpænɪˌʃædz, uːˈpɑːnɪˌʃɑːdz/;[1] singular: Sanskrit: उपनिषत्, IAST: Upaniṣat, IPA: [upəniʂət̪]; plural: Sanskrit: उपनिषदः) are a collection of texts in the Vedic Sanskrit language which contain the earliest emergence of some of the central religious concepts of Hinduism, some of which are shared with Buddhism and Jainism.[note 1][note 2] The Upanishads are considered by Hindus to contain revealed truths (Sruti) concerning the nature of ultimate reality (brahman) and describing the character and form of human salvation (moksha). The Upanishads are sometimes referred to as Vedanta ("Last part of Veda") when interpreted in the context of Uttara Mimamsa. But according to the Brahmasutra, the Upanishads address a different subject matter (inquisition into Brahman), and the subject matter of the Vedas is inquisition into ritual action. Most interpretations of the Brahmasutra are clear that one does not have to master the Vedas first to study the Upanishads. Etymology[edit]

A Science Odyssey: People and Discoveries: Eugenics movement reaches its height Eugenics movement reaches its height1923 Photo: This family was awarded Honorable Mention, Large Family Class, as part of a eugenics exhibit at a Kansas fair in 1923. The term eugenics comes from the Greek roots for "good" and "generation" or "origin" and was first used to refer to the "science" of heredity and good breeding in about 1883. Within 20 years, the word was widely used by scientists who had rediscovered the work of Gregor Mendel. Mendel had meticulously recorded the results of cross-breeding pea plants, and found a very regular statistical pattern for features like height and color. Psychiatrist A psychiatrist is a physician who specializes in psychiatry. A psychiatrist specializes in the diagnosis and treatment of mental disorders. Psychiatrists are medical doctors who must evaluate patients to determine whether or not their symptoms are the result of a physical illness, a combination of physical and mental, or a strictly psychiatric one.

Top 10 Ways Humanity is Being Murdered (NaturalNews) Of all the threats to humanity today, none is more destructive than modern-day “evidence-based science.” And by the word “science,” I don’t mean the humble pursuit of knowledge using genuine scientific methods. What I mean is the dogmatic, corporate-driven brand of distorted science based on falsified evidence, bribery of gatekeepers and corruption of government regulators.

Vaccine Jonas Salk in 1955 holds two bottles of a culture used to grow polio vaccines. A vaccine is a biological preparation that improves immunity to a particular disease. A vaccine typically contains an agent that resembles a disease-causing microorganism and is often made from weakened or killed forms of the microbe, its toxins or one of its surface proteins. The agent stimulates the body's immune system to recognize the agent as foreign, destroy it, and keep a record of it, so that the immune system can more easily recognize and destroy any of these microorganisms that it later encounters.

Fundamentalists Think Science Is Atheism - Beacon Broadside By Karl Giberson This blog appeared originally in The Huffington Post. Equating science with atheism is one of the most dangerous byproducts of America's culture wars.

We think that eugenics is a form of discrimination. Eugenics is a theory that promotes the higher reproduction of people with desired traits. If you do not posess these traits, you are excluded from the rest of the society you live in. That exclusion is excluding people because of traits they do not control which, in our opinion, is unacceptable. by crisandfelix Oct 31