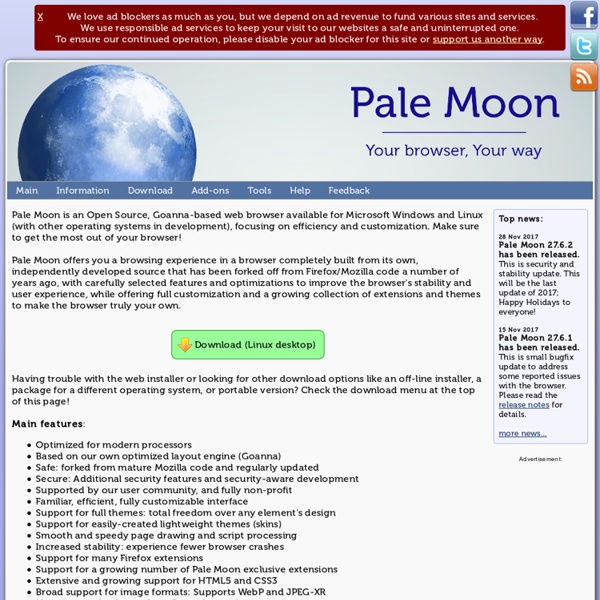 The SeaMonkey® Project - CometBird Pale Moon - portable! You can now take Pale Moon anywhere with you! You've enjoyed Pale Moon at home, or at the office. You've wondered if you could use it elsewhere: in a library, on a public computer, in a cybercafé... You need something portable, that is as simple as plugging in your USB stick and running your favourite browser, with all your bookmarks and passwords at your fingertips? Then here is the answer: Pale Moon Portable! Following the trend of other browsers, I have created a portable installation, which, thanks to winPenPack's X-launcher that the portable launcher is based on, is completely self-contained. Note: portables are not meant to have file/URL associations with the desktop. How do I use this? Three simple steps: Download the Pale Moon Portable file (below) Extract the contents of the file to your USB stick in a folder of your choice:Run the .EXE file and tell it where to unpack Run palemoon-portable.exe (not palemoon.exe) in the location you unpacked to That's it!

K-Meleon Pale Moon (web browser) Though based on Firefox code, Pale Moon differs in several concepts, including performance optimization, user interface and legacy hardware support. Pale Moon does not have a built-in PDF reader. Pale Moon makes use of compiler optimizations by using Microsoft C compiler's "/O2" and "/Ox" flags, and also by selection of included or excluded features from Mozilla Firefox to increase performance of the browser.[9][10][11][12] The resulting browser will not run on particularly old hardware as a result, but "by cutting out support for older systems, Pale Moon works with an optimized code base that takes full advantage of modern processor instruction sets. Further performance tuning is achieved by removing rarely used functions of Firefox, including accessibility features, parental controls, crash reporter, ActiveX and Active Scripting[6][14] These optimization techniques increased the subjective performance of Pale Moon as compared to Firefox.[6][5][15][16] Official website

Greasemonkey Chromium Blog Swiftfox Pale Moon: a Firefox clone to improve your 64-bit web experience The availability of 64-bit systems to the regular user is fairly recent, even though they started to be developed in the 60′s, based on UNIX architecture. Microsoft released their first 64-bit operative system with Windows XP in 2001, but the true landmark came with Windows Vista. Not only was the OS itself more 64-bit oriented, but computers were also sold with improved components, more oriented to run 64-bit software. Windows 7 also boosted the usage of this computer architecture. When I got through all the advantages of having a 64-bit operating system, I tried to improve the piece of software I use the most on my PC: my web browser. Background As a very quick “64-bit 101″, let me say that 64-bit computing uses processors with more space to address information, which also support more RAM to process data. Pale Moon is a free software developed by Moonchild Productions, a collective created by Mr. Having seen the advantages on other systems (e.g. Application Overview Firefox overview.