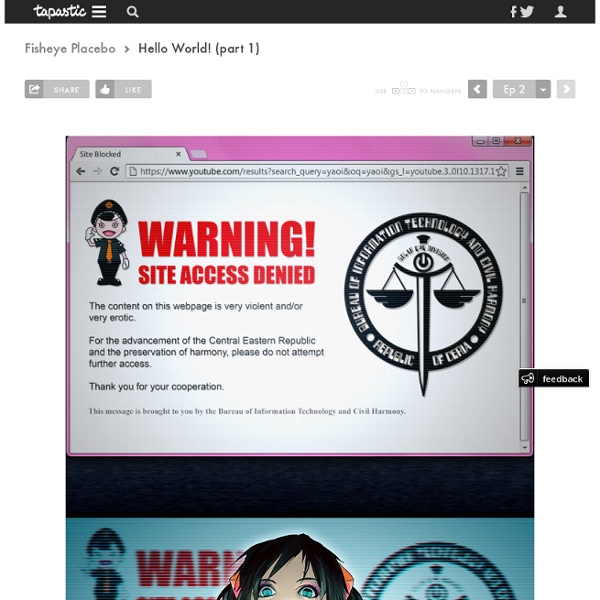 A Library Slide by Moon Hoon Architect Moon Hoon recently designed the Panorama House (scroll down), in Chungcheongbuk-do, South Korea. One of the most unique features incorporated into the home is a wooden slide built directly into a library which also functions as a stair-stepped home theater seating area. Via the architect: The basic request of upper and lower spatial organization and the shape of the site promoted a long and tin house with fluctuating facade which would allow for more differentiated view. The key was coming up with a multi-functional space which is a large staircase, bookshelves, casual reading space, home cinema, slide and many more. See many more interior and exterior photos over on Contemporist.

Hypnotic Animated GIFs from Mat Lucas UK-based artist Mat Lucas works by day as a graphic designer and by night runs a Tumblr of experimental art called 89—A. Lucas tells me that many of his GIFs begin as a problem he’s facing while learning various graphics and video applications like Cinema4D, After Effects, and Photoshop. The byproduct of his experimentation are often ethereal geometric forms that pulsate, rotate and contract in various hypnotic patterns. Above are some of my favorite pieces but you can see much more here. A 15th Century Cathedral Transformed into a Modern Bookstore For many, reading a good book can be a religious experience, but this new bookstore in Zwolle, The Netherlands takes that idea to a whole new level. Architects BK. Architecten were tasked with converting this 15th century Dominican church into a modern bookstore with the addition of 700 square meters of shopping space. But there was one major catch: all the historical elements of the 547-year-old building including stained glass windows, pipe organ, ceiling paintings and expansive arches had to remain intact. Incredibly, BK. Waanders in de Broeren opened earlier this summer and you can see many more views on the architect’s website.

Oscillate, Mesmerizing Animation of Complex Sine Waves by Daniel Sierra “OSCILLATE” is a mesmerizing animation by artist Daniel Sierra for his MFA at the School of Visual Arts in New York… Daniel Sierra | via Intricate Modular Paper Sculptures by Richard Sweeney Inspired by the organic forms of nature like mounds of snow and clouds, English artist Richard Sweeney creates delicate modular sculptures out of paper. It’s hard to believe that some of these 3D sculptures came to life from just from paper, but the Wakefield, England-based artist works primarily with a ruler and cutter to bend fold and glue together his complex sculptures, which range from table-top size to floor-to-ceiling installations. Especially impressive are his pleated sculptures, which often don’t even use glue to achieve their three-dimensional terrain look. Sweeney is currently part of a touring show titled Above the Fold. And for those lucky folks in the Netherlands, he’ll be showing his work at the CODA Museum in Apeldoorn this summer. (via Cross Connect Magazine)

Fascinating 3D-Printed Fibonacci Zoetrope Sculptures These 3d-printed zoetrope sculptures were designed by John Edmark, and they only animate when filmed under a strobe light or with the help of a camera with an extremely short shutter speed. He shares about the project: These are 3-D printed sculptures designed to animate when spun under a strobe light. The placement of the appendages is determined by the same method nature uses in pinecones and sunflowers. If you happen to have a 3D printer handy, you can find instructions on how to make these over on Instructables.

15 Most Awesome Lamps And Chandeliers Designs. A Must See! Light is very important for every home, but it’s also so much more then that. The unique design of awesome lamps and Chandelier can change the look of the entire room. In this post we have collected some very creative awesome lamps from different sources which show the talented artwork of artists as well. All are DIY Lamps design created by talent people and creative artists and we are happy and thankful to them for creating such an awesome lamps or chandeliers like these. Please check and I am sure you will be highly amazed with the talent. 1. Designed By Richard Clarkson 2. Designed By Kristyna Pojerova 3. Designed By Yoy-idea.jp 4. Designed By: masonscreations.com 5. Designed by : hellolumio.com 6. Designed by Alex Garnett 7. Designed by platinlux.com 8. Credits to: Poetic Lab 9. Credits to: paper-cellophane.blogspot.ca | buy here 10. Credits to: Roxy Towry-Russell 11. Credits to: khaosproductions Credits to: athousandmiles-k.blogspot.com 12. 13. Designed by Takao Inoue 14. 15. Thanks comments

Queen of Clubs Person As the Queen reigning over the Clubs suit, these people usually enjoy work that involves application of the mind: communications, organizing or, on the spiritual spectrum, intuitive and psychic work. A quick study, the Queen of Clubs truly enjoys being well informed on any topic of their choosing. As a result, they often prefer to direct according to their own authority on a subject rather than follow another. Consequently, this card gravitates toward being the boss or self-employed. Found in the Mars and Mercury position in the Master Life Script, the communication style of the Queen of Clubs can be rather convincing if not outright aggressive. Their Ace of Spades card in Jupiter helps them to zero in on a good opportunity or two that, through their hard work and determination, proves to be beneficial. Their Challenging Karma Card (-KC), the Three of Hearts, indicates that beneath all this authority is a gentle heart, sensitive and kind.