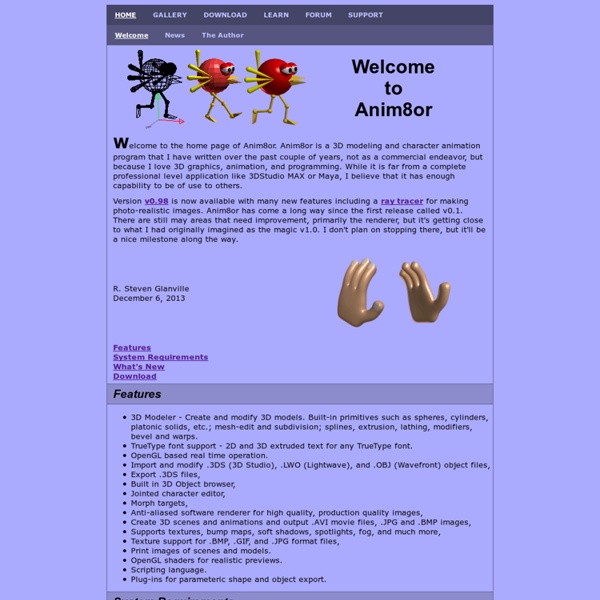 free-cad POV-Ray - The Persistence of Vision Raytracer 25 (Free) 3D Modeling Applications You Should Not Miss 3D-modeling tools help turn individual ideas into beautiful models and prototypes for a variety of fields. These tools allow building and customizing models from the ground up, no matter if you are a keen beginner or a professional engineer. Popular in various industries such as film, animation, gaming, architecture, and interior design, 3D models are key aspects of various projects. Choosing the best modeling software is often difficult because of various aspects and the wide range of features available in these tools. To help you with the selections, here is a list of 20 3D-modeling software for personal or professional modeling. Read more: 25 Websites to Download 3D Printer STL Models Wings 3D Wings 3D is an advanced sub-division modeler which offers a wide range of modeling tools and a customizable interface, along with a built-in AutoUV mapping tool, as well as export facility for common 3D formats. Supported Platforms: Windows | macOS | Linux [Download here] Daz Studio Open SCAD NaroCAD

Wings 3D About OpenFX What is OpenFX? OpenFX is an Open-Source 3D modeling, animation and rendering suite created by Dr. Stuart Ferguson. He made the decision to release the source code to the public in the middle of 1999, and the product formerly named SoftF/X was renamed to OpenFX. It has now been released under the terms of the GNU General Public Licence. In 2005 a major release 2.2 included a GPU version of the rendering engine that gives a quality that is almost the equal of the software engine. In 2007 a new class of actor was introduced into the animator that facilitates particle animation. In 2009 the skeleton structure in the designer was enhances to a give weights to each bone. In 2011 a character path follower system was created that make it easy to carry out character animation where a repeated action takes place as the character moves, simulating walking, running and mixed activities are all now one-click operations. What can OpenFX do? What platforms does OpenFX run on?

K-3D Metasequoia K-3D Voidworld Register for RenderMan Software Register today and be notified when the next version of RenderMan is released with non-commercial licensing. © Disney/Pixar Check out RenderMan in Action RenderMan Requirements RenderMan is advanced technology for shading, lighting, and rendering. RenderMan can be plugged into one of the following tools, Maya, Houdini, Katana, or Cinema4D. RenderMan by itself does not have a user interface or GUI. Availability? Free Non-Commercial RenderMan is scheduled for release in the SIGGRAPH timeframe, which is August 2014. Register for Free Non-Commercial RenderMan You'll be notified when the non-commercial software is available, which is scheduled for August 2014.