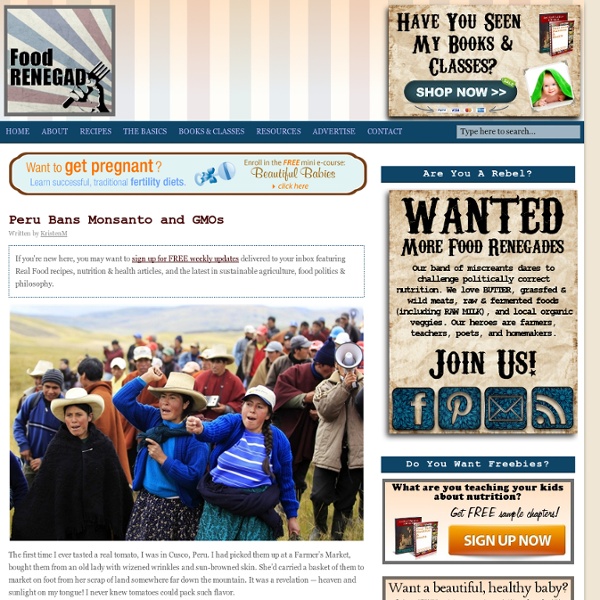 The first time I ever tasted a real tomato, I was in Cusco, Peru. I had picked them up at a Farmer’s Market, bought them from an old lady with wizened wrinkles and sun-browned skin. She’d carried a basket of them to market on foot from her scrap of land somewhere far down the mountain. It was a revelation — heaven and sunlight on my tongue! I never knew tomatoes could pack such flavor. I fell in love with the country and it’s people, the Quechua indians who are the remnants of the once proud Incas. Thanks to the indomitable spirit of that people, a ten-year ban on GMOs takes effect this week in Peru! Stephanie Whiteside reports, Peru’s ban on GMO foods prohibits the import, production and use of genetically modified foods. The victory is a long time coming. The decree banning GMO foods was drafted in 2008. A study done in April of 2011 by the Peruvian Association of Consumers and Users (ASPEC) tested 13 products purchased in major supermarkets and shops in Lima, Peru. Why 10 years?

Twin DNA test: Why identical criminals may no longer be safe 14 January 2014Last updated at 20:57 ET By Alison Gee BBC World Service It's well known that identical twins are not totally identical - they can, usually, be told apart, after all. But up to now it has been almost impossible to distinguish their DNA. It's claimed that a new test can do it quickly and affordably, however - and this could help police solve a number of crimes. At the end of 2012, six women were raped in Marseille, in the south of France. Evidence, including DNA, led police to not one, but two suspects - identical twins Elwin and Yohan.

Why Do G.M.O.'s Need Protection? Genetic engineering in agriculture has disappointed many people who once had hopes for it. Excluding, of course, those who’ve made money from it, appropriately represented in the public’s mind by Monsanto. That corporation, or at least its friends, recently managed to have an outrageous rider slipped into the 587-page funding bill Congress sent to President Obama.[1] The rider essentially prohibits the Department of Agriculture from stopping production of any genetically engineered crop once it’s in the ground, even if there is evidence that it is harmful. Doctors 3D-print 'living' body parts Image copyright Wake Forest Custom-made, living body parts have been 3D-printed in a significant advance for regenerative medicine, say scientists. The sections of bone, muscle and cartilage all functioned normally when implanted into animals. The breakthrough, published in Nature Biotechnology, raises the hope of using living tissues to repair the body. Experts described the technology, developed in the US, as a "goose that really does lay golden eggs".

Key summit set in genetically modified food label fight - The Hill's RegWatch Major players in the food industry have scheduled a crucial meeting for next week that could become a turning point in the regulatory battle over genetically modified foods. Challenges to the use of biotechnology have created an “unprecedented period of turmoil” for food producers, the Grocery Manufacturers Association (GMA) said in a letter circulated among trade groups that was obtained by The Hill. “We have reached a pivotal point in this effort and believe now is the time to bring together a broad coalition to confront these challenges,” the GMA wrote in the letter, which invited CEOs and top industry officials to a Wednesday summit in Washington. Just how the food industry might move forward appears up for debate. Though organizers of the GMA summit were tight-lipped, advocates and industry officials said the options could ultimately range from a coordinated attack against labels to acceptance of a national standard.

Gene therapy 'could be used to treat blindness' 15 January 2014Last updated at 20:55 ET By Pallab Ghosh Science correspondent, BBC News Jonathan Wyatt likened his blindness to being at the edge of an abyss Surgeons in Oxford have used a gene therapy technique to improve the vision of six patients who would otherwise have gone blind. The Post-GMO Economy One mainstream farmer is returning to conventional seed — and he’s not alone By Elizabeth Royte on December 6, 2013 Photography by Daniel Shea As an invulnerable tween, Chris Huegerich, the child of a prosperous farming family, wiped out on his motorcycle in tiny Breda, Iowa. Forty years on, folks still call Huegerich “Crash.”

Sperm carries information about dad's weight Turns out dads are also eating for two. A study published December 3 in Cell Metabolism reveals that a man's weight affects the heritable information contained in sperm. The sperm cells of lean and obese men possess different epigenetic marks, notable at gene regions associated with the control of appetite. The comparisons, which included 13 lean men and 10 obese men, offer one biological explanation for why children of obese fathers are themselves more predisposed to obesity. Paul Krugman on Why the U.S.-China Agreement on Carbon Emissions Is a Really Big Deal Photo Credit: via YouTube November 14, 2014 | Like this article? Join our email list: Stay up to date with the latest headlines via email. Pesticide-Contaminated Meal Kills 22 Children in India, Protests Spark Image from Agence France-Presse (AFP) Twenty-two children are dead so far in the village of Dharmasati Gandaman, in India’s Bihar state. The cause is not some communicable disease or strange virus, but their school lunch. According to the BBC, the children all ate from the school’s free mid-day meal. Forty-seven fell ill and 28 had been taken to area hospitals.

Mutation in key gene allows Tibetans to thrive at high altitude Buddhist monks at a monastery in Xiahe. The gene mutation is an adaptation to low oxygen levels on the Tibetan plateau. Photograph: Mark Ralston/AFP/Getty Images A gene that controls red blood cell production evolved quickly to enable Tibetans to tolerate high altitudes, a study suggests. The finding could lead researchers to new genes controlling oxygen metabolism in the body. An international team of researchers compared the DNA of 50 Tibetans with that of 40 Han Chinese and found 34 mutations that have become more common in Tibetans in the 2,750 years since the populations split.

No, GMOs Won't Harm Your Health venturecx/Thinkstock With historic drought battering California's produce and climate change expected to jeopardize the global food supply, there are few questions more important than what our agriculture system should look like in the future. And few agricultural issues are more politically charged than the debate over genetically modified organisms. Even as companies like Monsanto are genetically engineering plants to use less water and resist crop-destroying pests, activists are challenging the safety and sustainability of GM foods. Nano-balls filled with poison wipe out metastatic cancer in mice For most cancer patients, it’s not the original tumor that poses the greatest risk. It’s the metastases that invade the lung, liver, and other tissues. Now, researchers have come up with an approach that tricks these spinoff tumors into swallowing poison.

GMO Salmon Can Reproduce: Meet the Terrifying Offspring It doesn’t happen often in nature, but now and then, a wild Atlantic salmon (yes, there are still a few left) mates with a brown trout and has hybrid offspring. This ability to reproduce between species had some Canadian scientists curious: If a genetically modified Atlantic salmon were to come in contact with a brown trout, would it too be able to have little transgenes babies? The answer is yes, according to a new study published in the Proceedings of the Royal Society B . And it turns out that those offspring carry the genetically inserted trait that allows them to grow faster than their Mother-Nature-made cousins. Much faster.