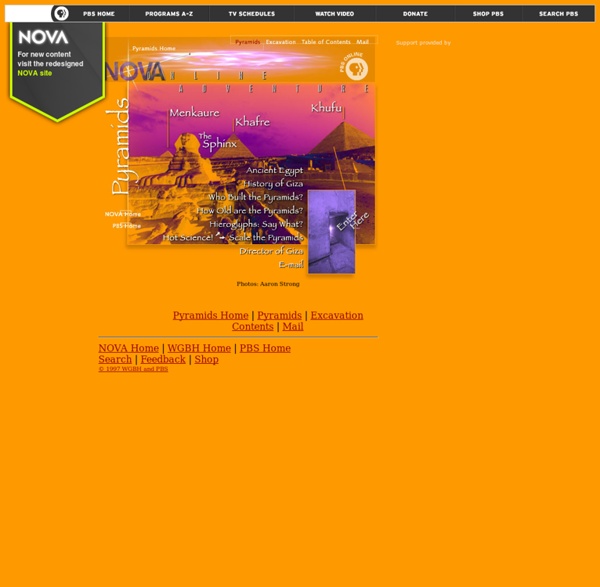 Discovering Ancient Egypt Carnegie Museum of Natural History: Life in Ancient Egypt Life in Ancient Egypt Welcome to Life in Ancient Egypt, a companion online exhibition to Walton Hall of Ancient Egypt at Carnegie Museum of Natural History. Carnegie Museum of Natural History has acquired Egyptian artifacts since its founding and now holds about twenty-five-hundred ancient Egyptian artifacts. In the hall the artifacts are displayed in relation to the daily life and traditions of the people who made them, so that the objects are seen in the context of the culture. You may choose from the links to the left or follow the suggested path by clicking the Next button on each screen. Ancient Egypt - Ancient History Under Ahmose I, the first king of the 18th dynasty, Egypt was once again reunited. During the 18th dynasty, Egypt restored its control over Nubia and began military campaigns in Palestine, clashing with other powers in the area such as the Mitannians and the Hittites. The country went on to establish the world’s first great empire, stretching from Nubia to the Euphrates River in Asia. In addition to powerful kings such as Amenhotep I (1546-1526 B.C.), Thutmose I (1525-1512 B.C.) and Amenhotep III (1417-1379 B.C.), the New Kingdom was notable for the role of royal women such as Queen Hatshepsut (1503-1482 B.C.), who began ruling as a regent for her young stepson (he later became Thutmose III, Egypt’s greatest military hero), but rose to wield all the powers of a pharaoh. All of the New Kingdom rulers (with the exception of Akhenaton) were laid to rest in deep, rock-cut tombs (not pyramids) in the Valley of the Kings, a burial site on the west bank of the Nile opposite Thebes.

NatGeo: King Tut Revealed By A.R. Williams He was just a teenager when he died. The last heir of a powerful family that had ruled Egypt and its empire for centuries, he was laid to rest laden with gold and eventually forgotten. Inside King Tut’s subterranean burial chamber, against a backdrop of sacred murals, Zahi Hawass, head of Egypt’s Supreme Council of Antiquities, removes padding to reveal the young pharaoh’s remains. Clues From Top ... Did the young pharaoh die from a blow to the head? As evidence, they cite an x-ray taken in 1968, which shows a fragment of bone in the skull cavity—emptied by embalmers, according to custom. The maturity of the skeleton and wisdom teeth confirms that Tut was about 19 years old when he died. ... to Bottom About five feet six inches tall (1.7 meters) and slightly built, Tut was in excellent health—well fed and free of any disease that would have affected his physique. Splendor of the Inner Sanctum Guide to the Great Beyond In his defense, Carter really had little choice.

NOVA | Explore Ancient Egypt Explore Ancient Egypt With 360-degree and other imagery, walk around the Sphinx, enter the Great Pyramid, visit tombs and temples, and more. Want to walk around the Sphinx? Clamber inside the Great Pyramid of Giza and seek out the pharaoh's burial chamber? Visit the magnificent tombs and temples of ancient Thebes? View From Top You are now standing atop Khufuí­s Pyramid, 45 stories above the Giza Plateau. Other things to look for as you navigate around the summit are the Sphinx, Khufu's three Queens' Pyramids, greater Cairo, and—hard to miss—Khafre's Pyramid. Descending Passage Length: 192 feetWidth: 3.5 feetHeight: 4 feetAfter ducking into the Great Pyramid at its entrance 55 feet up its northern face, you begin working your way carefully down the Descending Passage. Subterranean Chamber Length: 46 feet (planned)Width: 24 feet (planned)Height: 17.5 feet (planned)This unfinished chamber, lying nearly 100 feet below the surface of the Giza Plateau, is closed to the public. Ascending Passage

Sweet Search History - Ancient History in depth: The Story of the Nile Ancient Egypt The tomb of King Tutankhamun was found almost entirely intact in 1922. This headdress, placed over the mummified head of the deceased king in 1343 B.C.E., is made entirely of gold. Hieroglyphics, pyramids, mummies, the Sphinx of Giza, King Tut, and Cleopatra. The sands of the Nile River Valley hold many clues about one of the most mysterious, progressive, and artistic ancient civilizations. A great deal of evidence survives about how the ancient Egyptians lived, but questions remain. Even the wise sphinx would have trouble answering some of them. In De-Nile The Nile Valley was the seat of an ancient Egyptian civilization that spanned over 4,000 years. In 3,000 B.C.E., Egypt looked similar geographically to the way it looks today. The Nile is the longest river in the world; it flows northward for nearly 4,200 miles. Egyptians artisans smelted copper and gold for artistic, architectural, and even military purposes. The road to civilization required more organization and increased efficiency.

New clues illuminate mysteries of ancient Egyptian portraits WASHINGTON — Scientists are getting a clearer picture of how ancient Egyptians painted lifelike portraits that were buried with mummies of the depicted individuals. These paintings sharply departed from Egyptians’ previous, simpler artworks and were among the first examples of modern Western portraits, archaeologist and materials scientist Marc Walton reported February 14 at the annual meeting of the American Association for the Advancement of Science. The “mummy portraits” date to more than 2,000 years ago, when the Roman Empire controlled Egypt. Three such portraits of Roman-era Egyptians, found more than a century ago at site called Tebtunis, were created by the same artist, said Walton, of Northwestern University in Evanston, Ill. Identities of the boy and two men in the portraits are unknown. Many pigments in the portraits probably came from Greece, Walton said.

Egyptian Mummies The methods of embalming, or treating the dead body, that the ancient Egyptians used is called mummification. Using special processes, the Egyptians removed all moisture from the body, leaving only a dried form that would not easily decay. It was important in their religion to preserve the dead body in as life-like a manner as possible. So successful were they that today we can view the mummified body of an Egyptian and have a good idea of what he or she looked like in life, 3000 years ago. Mummification was practiced throughout most of early Egyptian history. Process The mummification process took seventy days. The embalmers next removed all moisture from the body. Next the wrapping began. As part of the funeral, priests performed special religious rites at the tomb's entrance. Such elaborate burial practices might suggest that the Egyptians were preoccupied with thoughts of death. But why preserve the body? Who Was Mummified For religious reasons, some animals were also mummified.

Egyptian Fractions 1 Egyptian Fractions The ancient Egyptians only used fractions of the form 1/n so any other fraction had to be represented as a sum of such unit fractions and, furthermore, all the unit fractions were different! Why? Is this a better system than our present day one? This page explores some of the history and methods with puzzles and and gives you a summary of computer searches for such representations. This page has an auto-generated Content section which may take a second or two to appear. The calculators on this page also require JavaScript but you appear to have switched JavaScript off (it is disabled). 2 An Introduction to Egyptian Mathematics Some of the oldest writing in the world is on a form of paper made from papyrus reeds that grew all along the Nile river in Egypt. [The image is a link to David Joyce's site on the History of Maths at Clarke University.] So what was on them do you think? 2.1 Henry Rhind and his Papyrus scroll So what did it say? 3 Egyptian Fractions For example,