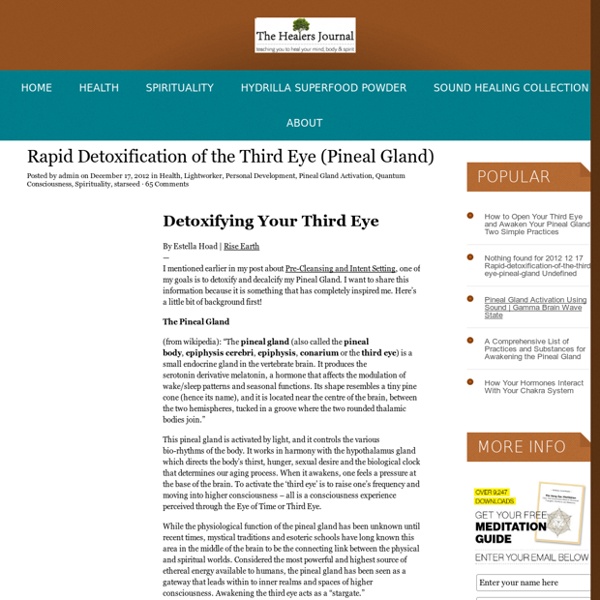 By Estella Hoad | Rise Earth — I mentioned earlier in my post about Pre-Cleansing and Intent Setting, one of my goals is to detoxify and decalcify my Pineal Gland. I want to share this information because it is something that has completely inspired me. Here’s a little bit of background first! The Pineal Gland (from wikipedia): “The pineal gland (also called the pineal body, epiphysis cerebri, epiphysis, conarium or the third eye) is a small endocrine gland in the vertebrate brain. This pineal gland is activated by light, and it controls the various bio-rhythms of the body. While the physiological function of the pineal gland has been unknown until recent times, mystical traditions and esoteric schools have long known this area in the middle of the brain to be the connecting link between the physical and spiritual worlds. Meditation, Visualization Yoga, and all forms of Out of Body travel, open the Third Eye and allow you to ‘see’ beyond the physical. Calcification of the Pineal Gland Related:  Miscellaneous Stuff 2

Why Words are the Least Effective Communicator (WakeUp-World.com) Words are the least effective communicator. They can be misinterpreted and misunderstood. You can say one thing and mean another. They are not truth. They can help you understand something, but that is not the same as knowing. Our feelings are energy. So for example, if you get invited out on a date and you don’t have a good feeling about it, then that is your intuition speaking to you, saying “hey this isn’t a great idea, don’t go there!”. So pay attention to your feelings. Read full article Category: Etymology and Word Magic

The Next Generation: Raising Children for the New Earth 8th September 2015 By Áine Sands Guest Writer for Wake Up World As the most vulnerable of mammals when born, human babies come into the world reliant on the loving care of parents/guardians and support from their environment. This vulnerability reflects the fact that humans come into the world knowing how to love, by completely trusting that they will be cared for. Our Purpose As parents/guardians/leaders of the following generation, it’s important that the current generation of adults are aware of how best to nourish the little ones who will one day be the adults running the show on our home planet. We are key contributors to their development – the shaping of their future and health – internal and external. In understanding that we are currently experiencing the great paradigm shift [1], we can recognise that our children are destined to be the first generation of the New Earth. EXAMPLE: What happens when a child leaves traditional education: Leading by Example Food as Medicine

The Artificial Matrix and the Hidden Agenda of Cryptocurrency Most people who have done extensive research on the New World Order (NWO) know that the Controllers of this secret international organization and their masters (the Dark Forces) want to enslave the people of the world under a one world government, one world religion, and one world digital currency. Unfortunately, only a very low percentage of them know about the artificial matrix and the true agenda of the Dark Forces. In many ways, the Dark Forces and the Controllers have already enslaved us, but they have not achieved their ultimate goal, which is total control of everything, including our minds and souls. The bad news is that they have already enslaved our souls to a large degree, but the good news is that they can only enslave our souls with our CONSENT. Because the Dark Forces and the Controllers can NOT enslave us without our consent, they have to use the art of trickery to trick us to stay in their artificial matrix. What is Cryptocurrency? The Artificial Matrix The Matrix – Battery

Anarchy – Resisting the Psychopaths in Control 29th September 2015 By Amaterasu Solar Guest Writer for Wake Up World Many a reader will equate anarchy with “lawlessness” and “chaos,” while others know quite well that the true meaning of “anarchy” is simply “anti-archon,” “anti-rulers.” No matter how you cut it, having someone (rulers, “leaders,” “elected officials,” etc.) dictate what others may and may not do outside the three Laws is the antithesis of freedom. Psychopaths get quite good at moving us with our emotions and it is with our minds, our discernment, that we can overcome the pickle that we, humanity on this planet, are in. This is what we get when we consent to rulers. Removing the top-down in favor of a web-driven bottom-up system, and using the natural chaos in the societies we see functioning all around us, from insects to critters both bigger and smaller, would serve humanity well. One root problem to allowing this informational chaos, this stigmergy, to flow within humanity is the yoke of money. About the author:

EMF Protection With Crystals “I live in a house protected by more than a few crystals. Essential as there is an electricity substation nearby. Since attending the Baden Baden Medicine Fair in the 1990s, where electromagnetic fields (EMFs) and geopathic stress (GS) as a cause of dis-ease were regularly discussed, and speaking to researchers, healers and doctors working at the cutting edge of energy medicine, I am well aware that EMFs can have a seriously detrimental effect on health, as may GS. The evidence is increasing year on year…….the need for EMF protection was apparent when I had my very first computer. I felt that it drew all the energy from me, leading to rapid exhaustion. The computer engineer also happened to be a martial arts instructor and had a good understanding of how subtle energy works. It would appear that my energy was interfering with the computer in the same way that it was interfering with mine; the two were incompatible. Judy lays out the dangers of EMFs very clearly.

Tricked By The Light With Wayne Bush | The Crazz Files Podcast: Play in new window | Download TRICKED BY THE LIGHT: HOW SOULS ARE PROGRAMMED TO GO TO THE MOON/SUN AT DEATH TO BE RECYCLED AS ENERGY New Theory of Life and Death — How to Win the Game of Life and Escape the Prison Planet Earth which is a Matrix Illusion that We Dream. By Wayne Bush I have good news and bad news.

Free Online Courses about Practical Spirituality, Psychology, Meditation, Kabbalah, Dream Yoga, Tarot Study free, online courses about the practical knowledge—Gnosis—that nourishes and develops all the highest qualities of the human being. All philosophies, sciences, arts, religions, and mystical traditions emerged from the same primordial root, thus these courses radiate the heart wisdom of the Greek Mysteries, Christianity, Buddhism, Islam, Hinduism, and more. Topics include Meditation, Kabbalah, Karma, Hebrew letters, the Runes, Tarot, Dream Yoga, Gnosis, Astrology, and much more. Most of these courses were transcribed from live, unscripted lectures given by Gnostic instructors. The lectures and downloads have been made possible by donations from students like you. There is a very wide range of depth and complexity given here, from the most basic to the very profound.

Stripping Off Our Armor: The Accumulating, Paradoxical Power of Wilhelm Reich Conner Habib’s series The Sex Radicals will be appearing regularly this summer on Reality Sandwich. “Civilization has not yet begun.” –Wilhelm Reich (1897 – 1957) To view sexologist and psychoanalyst Wilhelm Reich as our culture views him, move through his life backwards. To view his life as one of his supporters, move through it from the beginning of his career to the end; he worked tirelessly to help others, and was eventually driven mad by the mad world he lived in. To really understand Reich, the narrative shouldn’t be backwards/forwards. Here’s a lengthy quote from Reich’s book, The Murder of Christ: The Emotional Plague of Mankind, which, complete with shouting capital letters, shows him in all his glory: a profoundly clear thinker, ranting in a crazy tone, shocking us with truth and confusion all at once. “It IS possible to get out of a trap. For Reich sex was it. He allowed the mysteries of sexuality and sexual drives to lead him to a deep and frantic understanding of our culture.

Wing Chun What is the perfect way to fight? Is there a “perfect way” to fight or is every martial art, every system and approach just a haphazard shot in the dark with no objective, empirical, measurable advantage? The answer is that there IS absolutely a perfect way to fight and win every opponent, but the difficulty and the beauty is that perfect way is not something set in stone, but a fluid interplay between each fighter’s strengths and weaknesses. In this and many other ways fighting is like the game of Chess: Once you make your move, there is no turning back. The average Chess player can only handle playing one opponent at a time, just like the average person could only handle fighting one opponent at a time, but through diligent practice Chess grandmasters and martial grandmasters are able to successfully defeat several opponents simultaneously. The game of Othello also beautifully demonstrates this advantage of yin over yang.

Voice in the Wilderness: Apophatic/Kataphatic Apophatic / Kataphatic are two terms that are widely used and equally misunderstood. Apophatic means describing something by negation, e.g., 'it is not this or that' and then negating even the negation. Kataphatic is the other side of this coin, referring to description by positives, e.g., 'it is wet, it is good, it is invisible'. Having said this, the apophatic—especially in our day—is somewhat privileged for the following reasons: — In order to restore our minds to their optimal balance, we need to co-operate with how the brain in fact works, not fight it ('grace builds on nature'). "This negating or apophatic mode of creation of whatever-it-is reflected in our experience that what we know about things as they truly are, starting with Being itself, is apophatic in nature: we can know only what they are not. — We live in a time where increasing environmental noise and excessive information threaten to overwhelm us.

The Egyptian Connection The Egyptian Connection Welcome to what Stargate research looks like at its CRUDE, initial level ~ however, though everything shared is now outdated ~ I believe the collection of samples offered here will show that we are on the road to some VERY interesting discoveries ... maybe you want to join in the research. Ancient Egyptian records translate the Pleiades as "Krittikas" , "female judges of mankind" - they primarily equated them as the Seven Hathors, whom the dead had to remember and speak the names of those Goddesses to pass their examination to enter the ancient Egyptian perception of paradise, which was in the distant stars ... Modern Egyptians relate to the Pleiades as the Seven Midwives1. In archaic seven-gated Thebes, the Pleiades were represented by Seven Mantic Priestesses, who were linked to the Seven Pillars of Wisdom, an era when the Seven Hathors ruled over a rather grim calendar cycle which had the Sacred King slain every seventh year2. ... Footnotes