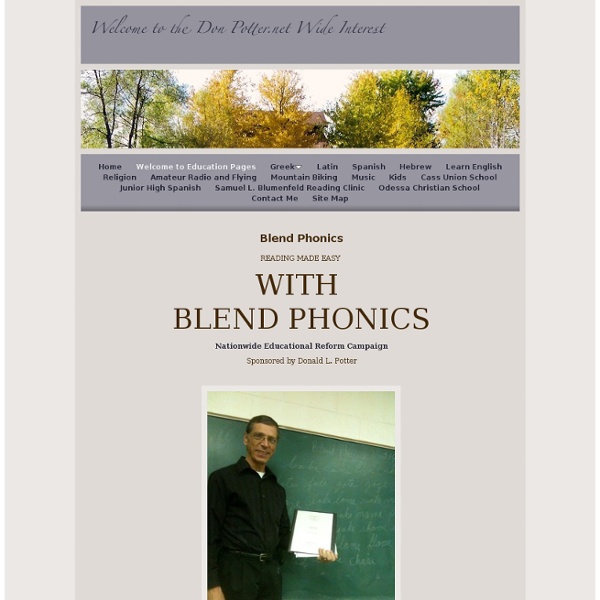 Nationwide Educational Reform Campaign Sponsored by Donald L. Potter Don teaching Blend Phonics Unit 14 with cursive Purpose Statement Blend Phonics is an easy, single-letter phonics technique for teaching reading to student of any age which will prevent the development of whole-word dyslexia in beginning students and remediate whole-word dyslexia in older students. Goal The goal of this Blend Phonics web page is to initiate a nationwide campaign to make Blend Phonics Technique available to every parent, every elementary teacher, and every reading tutor in America in order to eliminate the current epidemic of artificially induced whole-word dyslexia. How it all started Several years ago I read the following stirring recommendation for Hazel Loring's 1980Reading Made Easy with Blend Phonics for First Grade by Robert W. "An effective answer to illiteracy … Let me offer a less costly, and more effective answer. That last sentence struck me with great force. What I have discovered What you can do

How to Teach Closed and Open Syllables Closed and open syllables are the first two syllable types students should learn. Out of the six syllable types, these two are the easiest for students to master. Hundreds of common words can be spelled using these two syllable types, so our students can get a lot of practice even while their spelling skills are still in the early development stage. To determine whether a syllable is closed or open, look at the vowel. Closed Syllables Phonics games Phonics games will help your child to practise sounding out words, which will help them to read. Initially, children will learn basic letter sounds, such as "c-a-t" for "cat". Later they will move on to sounds such as "th", "sh" and "ch", then "oo", "oa" and so on. Once they recognise a few basic letter sounds, they will be able to work out what a written word says for themselves, a skill which they will be very proud to show off! Follow the links below to the free phonics games.

Using E-Portfolios in the Classroom For decades, students have been completing assignments in school. Often, these were seen only by the teacher, graded and returned to the student. Sometimes, the work was posted on a classroom wall or in a school hallway. Many teachers kept portfolios of student work for report card conferences, and the rare teacher taught students how to build their own portfolios from their work. With more and more schools going paperless or migrating to the "cloud" (storing files on the Internet), student work has become more easily shareable, accessible by many, and more easily organized. Many teachers have turned to digital portfolios -- or "e-portfolios" -- for their students.

Electronic Portfolios in the K-12 Classroom The use of personal portfolios for assessment and presentation long has been a component of higher education. In fact, personal portfolios are a graduation requirement at many colleges and universities. Now, electronic portfolios have begun to enter the world of K-12 education as well.

82 Free Phonics Flash Cards Download your phonics flash cards here. It may take a second New! Preschool Alphabet Flash Cards. What do our 82 flash cards accomplish? A fun, colorful, game -adaptable way to learn 20 of the toughest English sounds. Apps That Rise to the Top: Tested and Approved By Teachers Michelle Luhtala/Edshelf With the thousands of educational apps vying for the attention of busy teachers, it can be hard to sift for the gold. Michelle Luhtala, a savvy librarian from New Canaan High School in Connecticut has crowd-sourced the best, most extensive list of apps voted on by educators around the country. “I wanted to make sure we had some flexibility because there’s no one app that’s better than all the others,” Luhtala said.

Teach Your Monster to Read: Free Phonics & Reading Game Why is it free? The game has been funded by the Usborne Foundation, a charity set up to support initiatives to develop early literacy. The charity was founded by Peter Usborne MBE and his children, Nicola and Martin. Peter Usborne is the founder of Usborne Publishing, one of the world’s leading children’s book publishing companies and Children’s Publisher of the Year 2012. He was previously one of the founders of the magazine Private Eye. 14 top online coding courses There comes a point in everyone's life when it's time to take more control of your destiny. So, if you've built your own site using free WordPress themes or Drupal themes, you might be craving more control. It's time to take an online coding course, learn to code yourself and built your site, your way. Event promotion We have many accessible educational tools popping up that make learning new skills more straightforward.

The Best Free Software for 2015 Windows and MacOS don't get the attention they used to in today's mobile world. But we have not fully abandoned the desktop. The real work (and a lot of the play) of computing requires a full personal computer system.

Upgrade from Windows 7 to Windows 10, on the same hardware? So, are you one of those long-time Windows users who lived through the Vista fiasco and then upgraded to Windows 7 as soon as it was apparent that it was far superior to the previous version? Then, when you saw Windows 8 coming, you vowed to never again get caught with an experimental operating system and decided to stick it out with Windows 7? If so, chances are you're glad that you did so. Windows 7 has served you well, and you continued to be productive, while all those who upgraded to Windows 8 struggled with the Metro UI and its touch-based implementation on a desktop PC. Over the last several years, I've received email from lots of Windows 7 users who echo the above sentiments.