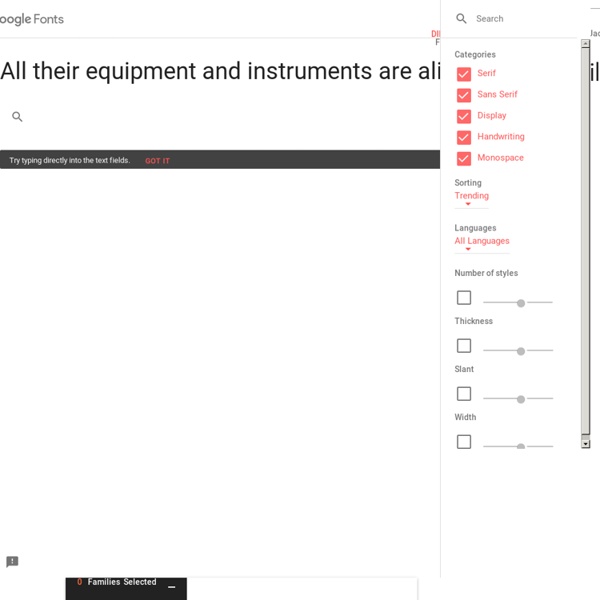 7 Tips & Tricks To Get The Most Out Of Google Drive Google Drive is a great service, but installing the application and synchronizing some files is just the first step. These tricks will help you take advantage of Google Drive, both on the desktop and on the web – whether you’re looking to easily synchronize other folders with your Drive or take advantage of the features only available on the website. Many of these tricks will also work with Dropbox, Microsoft SkyDrive, and any other service that provides a magic folder that automatically synchronizes your files over the Internet. Google’s Drive integration with third-party web apps is a unique feature, though. Use The Send To Menu You can add Google Drive to the Windows Send To menu and easily send files to your drive from anywhere on your computer.

‘Once Upon a Time’ Characters We Want Brought Back — Neal, Graham Ruby, Elsa Not everyone gets a happy ending on ABC’s Once Upon a Time — including the fans who latch onto, and then must bid adieu to, characters that are either doomed or deigned to disappear. RELATEDOnce Upon a Time‘s Rocky Rumbelle and More Burning Qs Answered In the wake of the resurrection of Maleficent, a saucy sorceress who many felt had been unjustly jettisoned way back in Season 1, TVLine took stock of other characters whose potential was left untapped, and who, if among the living/mostly dead, could still bring a certain spark to life in never-quiet Storybrooke. Review our countdown below, then weigh in on the gone-too-soon characters you’d most like to see be given a second chance.

Free Icon Fonts for Web User Interfaces By Jacob Gube This roundup features 18 free icon fonts that can be used in your commercial projects. The icon fonts in this post are perfect for your app user interfaces (UIs). Google Drive vs. Dropbox vs. SkyDrive vs. Amazon Cloud Drive vs. iCloud Cloud services aren’t necessarily a new technology, as IT companies and businesses have been using forms of cloud services in some respects for years now. Even personal cloud storage services for consumers have been around for a few years, but with most of the top technology companies now offering their own versions of cloud storage deployments, more everyday computer users have now made the jump. In today’s post, we will review the most popular cloud services and help you to determine which one may suit you best. When deciding on a quality cloud service, there is a good possibility that you will ultimately go with Dropbox, Apple iCloud, Google Drive (Gdrive), Amazon Cloud Drive or Microsoft Windows SkyDrive, as these are the mainstream offerings of the technology industry’s most influential corporations. Here are some things that you may want to consider when choosing a cloud service…

ContentFlow ContentFlow is a flexible CoverflowTM / ImageFlow like flow written in javascript, which can handle any kind of content. It supports all new and old major and not so major browsers. It's distributed under the MIT License. With ContentFlow it is now possible to have any number of flows within one web-page.

12 crucial Tumblr tricks you probably don't know Did you know that only the first five tags you use in any given Tumblr post are searchable? If not, don’t worry. While Tumblr has a Tips page, most don’t know it exists, and it only scratches the surface of potential shortcuts and tricks—features like the ability to display your tags in chronological order, to browse your dash using keystrokes instead of the scroll bar, and to view only the photos on your dash by appending the word "photos" to the tumblr.com url string.