9 Places You Never Want To Go On A Vacation 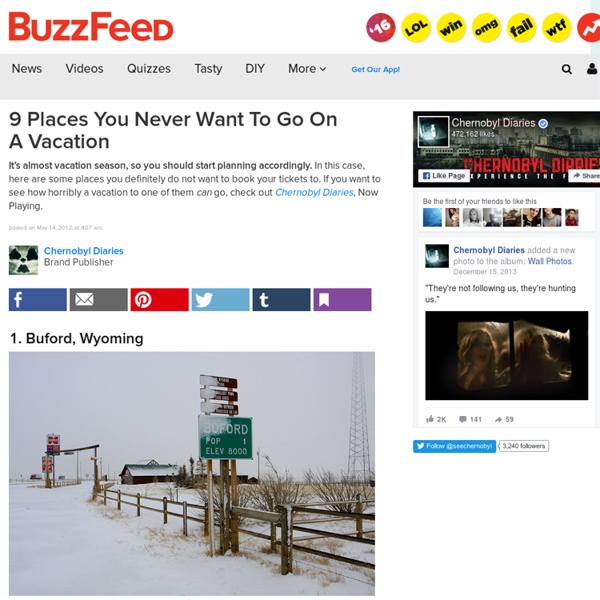 1. Buford, Wyoming Formerly sporting a bustling population of two, Buford now only has a single resident. Add that to the fact that it’s located in the middle of Wyoming—the least populated state in the union—and you have one hell of a bad place to vacay. 2. The Great Pacific Garbage Patch The Patch is a basically immobile, gigantic mass of trash out in the middle of the Pacific. 3. The Alnwick Poison Garden is pretty much what you’d think it is: a garden full of plants that can kill you (among many other things). 4. Ramree Island may be in the beautiful Burma, but nothing about this place is beautiful. 5. Although you probably wouldn’t want to vacation in Pripyat either, the Zone of Alienation is the 19-mile decommissioned perimeter surrounding the grounds of the Chernobyl incident. 6. Sorry to tell you this, but Ilha de Queimada Grande isn’t a fantastical island getaway. 7. 8. The Izus are a group of volcanic islands located off the southern coast of Japan’s Honshu island. 9.

Above the Clouds, Beneath the Stars: Pic du Midi Observatory in the Pyrenees Atlas Obscura on Slate is a new travel blog. Like us on Facebook, Tumblr, or follow us on Twitter @atlasobscura. The scene at Pic du Midi is one out of a sci-fi movie: a fortified concrete-and-stone complex, packed full of metal domes, sprawls across the top of a precipitous peak above the clouds. 9 Editing Tips that Make Your Writing Sparkle It’s often said that writing is rewriting. Banging out a quick first draft can be fun, but the real grunt work comes in revising your work. Here are nine editing tips that can help you polish your writing until it sparkles:

Best Movies of 2013 May we stipulate that 2013 has been a flat-out, stone-cold, hands-down spectacular year in movies? Which means that many of us are frustrated. After all, the average filmgoer only sees about six films a year. This is being written at a time when there are at least 10 must-see movies in area theaters, not to mention titles that are stacking up in our on-demand queues like backed-up shuttle flights circling Reagan National. And guess what: There are more on the way. Scar was the Tragic Hero of "The Lion King." I was completely BAKED while watching "The Lion King" for the first time in TWELVE years and it all just clicked with me. This is kind of long... so if you're too LIFTED i could understand if you skip this, but those who are curious, just bear with me. Well... the way I see it... within the context of the movie, the Jungle was a Monarchy right? So The Lions are all either members of the royal family, or otherwise aristocratic elitists.... which can symbolize the ruling class, aka rich white people.

100 Very Cool Facts About The Human Body The Brain The human brain is the most complex and least understood part of the human anatomy. There may be a lot we don’t know, but here are a few interesting facts that we’ve got covered. Nerve impulses to and from the brain travel as fast as 170 miles per hour. Ever wonder how you can react so fast to things around you or why that stubbed toe hurts right away? rainwater harvesting There’s a lot of advice floating around the internets about how to make a rain barrel. Most barrel pundits suggest drilling a hole in the bottom of a barrel and installing a faucet, a kind of connection called a “bulkhead fitting”. Unfortunately such improvised fittings have a tendency to leak. My favorite way to make a rain barrel is to take a 55 gallon drum, use the preexisting fittings on the top and turn it upside down, a process explained nicely here (complete with a list of parts), by B.

Writer’s Digest - Writing Prompts Write a scene that includes a character speaking a different language, speaking in a thick accent, or otherwise speaking in a way that is unintelligibe to the other characters. (Note: You don't necessarily need to know the language the character is speaking—be creative with it!) Describe a character's reaction to something without explaining what it is. See if your fellow prompt responders can guess what it is.

My collection of funny emails from my inbox. Subject: 5 MINUTE MANAGEMENT COURSE Lesson 1: A man is getting into the shower just as his wife is finishing up her shower, when the doorbell rings. The wife quickly wraps herself in a towel and runs downstairs. Ted's Caving Page, with the story of his discovery in a local cave. Due to the overwhelming number of requests I have received to tell about my discoveries and bizarre experiences in a cave not far from my home, I have created this web page. I will outline the events that happened to me during the past few months. Beginning with my journey into a familiar cave in December 2000 and ending... well, it hasn't actually ended yet. I will use my caving journal as the text to tell about my recent experience. I will give them to you as I experienced them, in chronological order. I have included photographs that were taken during my many trips into the cave.

6 Insane Discoveries That Science Can't Explain We like to feel superior to the people who lived centuries ago, what with their shitty mud huts and curing colds by drilling a hole in their skulls. But we have to give them credit: They left behind some artifacts that have left the smartest of modern scientists scratching their heads. For instance, you have the following enigmas that we believe were created for no other purpose than to fuck with future generations. The Voynich Manuscript