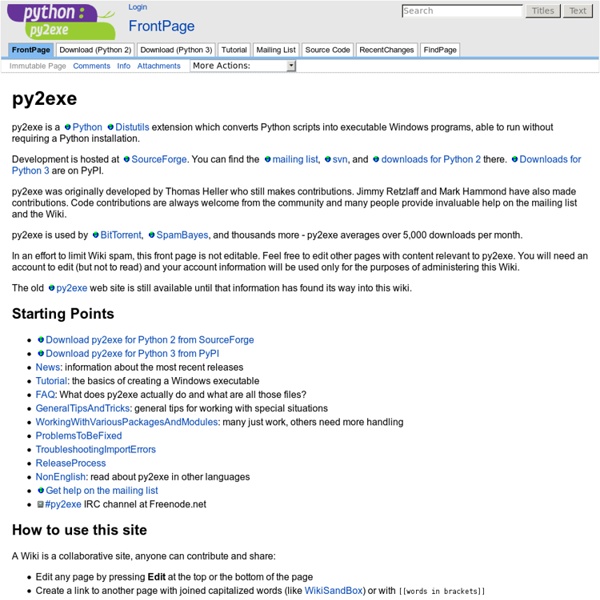 py2exe is a Python Distutils extension which converts Python scripts into executable Windows programs, able to run without requiring a Python installation. Development is hosted at SourceForge. You can find the mailing list, svn, and downloads there. py2exe was originally developed by ThomasHeller who still makes contributions, JimmyRetzlaff is the current maintainer, and MarkHammond also makes regular contributions. Code contributions are always welcome from the community and many people provide invaluable help on the mailing list and the Wiki. py2exe is used by BitTorrent, SpamBayes, and thousands more - py2exe averages over 5,000 downloads per month.

Why use AHK over Python? - AutoHotkey Community Learning any language is a good start... Personally, my first language was Lua. Later down the line I learnt about VBA and I didn't even realise AHK was a programming language till about 5-6 months ago. One thing I did like about VBA is that it had a macro recorder , which made it easy to learn how to do new things.

Contributing to Django Django is a community that lives on its volunteers. As it keeps growing, we always need more people to help others. As soon as you learn Django, you can contribute in many ways: Design Patterns in Python Alex Martelli is a leading light of the Python programming language community. He is a leader in the development of the language, author of Python in a Nutshell and has written extensively on Python in other books and articles. Last week he spoke to the SDForum Software Architecture and Modeling SIG on "Design Patterns in Python". Alex has posted the presentation slides here.

» Python Web Frameworks: Are Template Languages Worth using, or is Python enough? - DevChix - Blog Archive Last year I was tasked with the job of evaluating web frameworks and template languages, picking a set of tools, and using them to rewrite chunks of our web framework, one chunk at a time. It was a fun project (thanks be to Bill). I had months to try out various frameworks, content servers and template languages before we committed to anything and moved forward. With respect to the web framework itself, certain things swayed my decision. We had an existing database and a whole suite of home-grown Psycopg objects to access this data the way we wanted. I was very reluctant to rewrite or replace all of that, because it contained much of the business logic in a way that the entire group understood and was used to seeing/changing.

py2app - Create standalone Mac OS X applications with Python Uninstalling py2app 0.2.x (or earlier) If you have a pre-setuptools version of py2app installed, you must first remove it before installing (you may have to run the interpreter with sudo, depending on how and where py2app was originally installed). There are three paths that need to be removed: py2app and py2app.pth in your site-packages folder, and the py2applet script which may be in /usr/local/bin/ or otherwise in the bin directory belonging to the Python framework that was installed. Here is a Python script that should find these three paths and remove them if they exist (you may have to use sudo): #! Installing with easy_install

Scripting with Python and AutoHotkey After I began programming, I started noticing that some of the things I was doing on my computer at home were repetitive and could be automated to save time and effort. Unfortunately, my first language was C++, which doesn’t exactly lend itself well to that kind of work. I discovered that certain scripting languages could help me fill that need in my day-to-day tasks – Python and AutoHotkey are two languages that I have found helpful. In this blog, I’ll explain why. Python 2011 OSINT Discovery Toolkit–Reuser’s Repertorium Categories: Blog Wisdom,Book Lists,Briefings (Core),Fact Sheets,Handbook Elements,Historic Contributions,IO Multinational,Methods & Process,Tools,White Papers This is THE toolbox, available in both long and short versions, we recommend you start with the long and then rapidly migrate to the short. Arno is THE “dean” of OSINT for government, and the “dean” of the advanced librarian discovery movement. We strongly endorse Arno Reuser as an individual, and recommend his training offerings available directly from him. By-pass the external vendor training link at the Repertorium and send him a direct email. Arno’s Profile

fantasm - A taskqueue-backed, configuration-based Finite State Machine for Google App Engine Python A Python library for a configuration-based finite state machine workflow implementation based on taskqueue. Fantasm allows developers to create finite state machines using YAML markup. Each state and transition can have an action, implemented by a Python class that you write. Transitions between states are all performed using queues task (i.e., the taskqueue API) for high resiliency and operational visibility. In more advanced implementations, you can configure your machine to "fan-out," that is, create many replicas of a given machine to massively scale over large datasets.