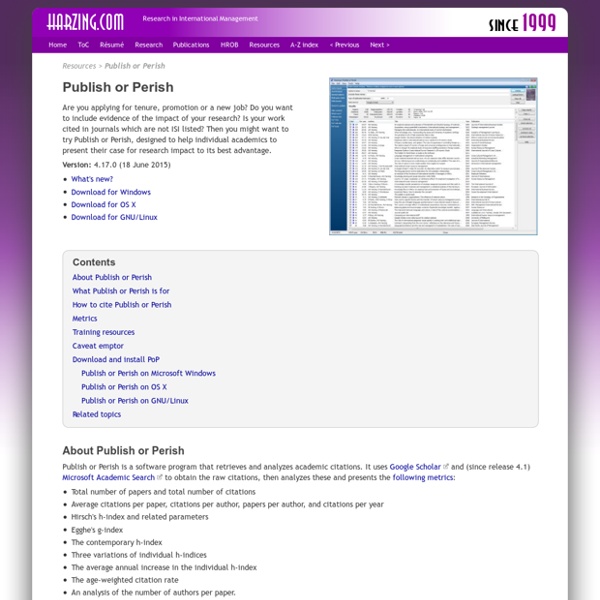 Are you applying for tenure, promotion or a new job? Do you want to include evidence of the impact of your research? Is your work cited in journals which are not ISI listed? Then you might want to try Publish or Perish, designed to help individual academics to present their case for research impact to its best advantage. Version: 4.17.0 (18 June 2015) About Publish or Perish Publish or Perish is a software program that retrieves and analyzes academic citations. Total number of papers and total number of citations Average citations per paper, citations per author, papers per author, and citations per year Hirsch's h-index and related parameters Egghe's g-index The contemporary h-index Three variations of individual h-indices The average annual increase in the individual h-index The age-weighted citation rate An analysis of the number of authors per paper. Note: Support for Microsoft Academic Search is still in its early stages and its coverage is more limited than that of Google Scholar.

Video Literary Devices Acquiring a list of literary terms and devices has been standard fare in many high school English classes for decades. Students are expected to grasp the difference between a simile and a metaphor. They learn about alliteration. They can give examples of deus ex machina. Electronic paper Electronic paper, e-paper and electronic ink are display technologies which are designed to mimic the appearance of ordinary ink on paper.[1] Unlike conventional backlit flat panel displays which emit light, electronic paper displays reflect light like ordinary paper, theoretically making it more comfortable to read, and giving the surface a wider viewing angle compared to conventional displays. The contrast ratio in available displays as of 2008 might be described as similar to that of newspaper, though newly developed displays are slightly better.[2] An ideal e-paper display can be read in direct sunlight without the image appearing to fade. Many electronic paper technologies can hold static text and images indefinitely without using electricity. Flexible electronic paper uses plastic substrates and plastic electronics for the display backplane.

NoteSlate tablet review, specs, price, release date Whether you are looking for cheap tablet ? This NoteSlate is well suited for you with price of $99 and will be release in June, 2011 with a variety of two-tone designs. With a choice of black or white backgrounds on the matte monochrome display, 4 different models with black backgrounds and blue, white, green, or red text and pictures. Automatic Graph Layout Microsoft Automatic Graph Layout (MSAGL), formerly known as GLEE, is a .NET tool for laying out and visualizing directed graphs. You can use MSAGL to represent complex directed graphs, such as those found in business management, manufacturing, and network analysis, as well as phylogenetic trees, which are used in bioinformatics research. MSAGL is now available for purchase at the Microsoft online store.

Academic Journals and Research Community About Frontiers Frontiers is a community-oriented open-access academic publisher and research network. Our grand vision is to build an Open Science platform that empowers researchers in their daily work and where everybody has equal opportunity to seek, share and generate knowledge. Frontiers is at the forefront of building the ultimate Open Science platform. We are driving innovations and new technologies around peer-review, article and author impact metrics, social networking for researchers, and a whole ecosystem of open science tools. We are the first – and only – platform that combines open-access publishing with research networking, with the goal to increase the reach of publications and ultimately the impact of articles and their authors.

NoteSlate: the cheap digital notepad you’ve been dreaming off If you’re not convinced it’s worth paying over 900 dollars for a 7 inch tablet that’s supposed to be optimized for taking notes like the ASUS EEE Pad Memo I think I’ve got just the right thing for you: the 13 inch NoteSlate tablet. It’s more of a digital notepad, where you can use your fingers or the included digital stylus to take notes, store them, listen to some MP3 players and nothing else. There’s a small price to pay for such a cheap device: 99$ for the first version.

Comparison of reference management software The following tables compare reference management software. General[edit] In the "notes" section, there is a difference between: Operating system support[edit] In the case of web applications, this describes the server OS. How to Feng Shui Your Microsoft Word Tables You ever watch one of those organizing shows, where a team of experts comes into someone’s home and de-clutters it? The freshly painted, beautifully tidy rooms just breathe. They feel more vibrant and alive, full of possibility. Practitioners of Feng Shui, the ancient Chinese art of arranging objects in space for better health and good fortune, would say the chi — or energy — flows more freely through these rooms.