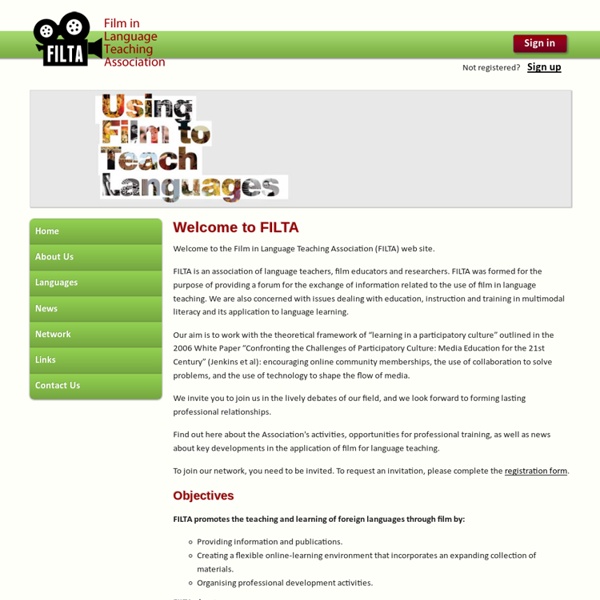 How can film help you teach or learn English? What can film and video add to the learning experience? Kieran Donaghy, who won the British Council’s TeachingEnglish blog award tells us why film is such a good resource and recommends some useful websites, in one of our top five articles of all time, illustrated by artist Jamie Johnson. Language teachers have been using films in their classes for decades, and there are a number of reasons why film is an excellent teaching and learning tool. Learning from films is motivating and enjoyable

Staff Picks on Vimeo Upload We really love videos, and these are the videos we really, really love. All of these videos have been hand picked by the real humans who work at Vimeo. The Best Sites To Help Teach About 9/11 You might want to check-out my New York Times post that includes 9/11 teaching ideas and a student interactive quiz for English Language Learners. With the anniversary of the attack on the World Trade Center and the Pentagon coming-up in less than a month, I thought I would put together a “The Best…” list to highlight some relevant accessible sites for English Language Learners. Teachers of very young students probably want to review some of the video clips to determine if they would be too disturbing to watch. There are certainly plenty of resources around that cover many of the country and worldwide effects of the attack in the years since then (and I’ll probably be compiling a list of them soon).

Film Links Until quite recently it was difficult to find pedagogically sound film material to help students improve their language through watching film, and teachers had to spend many hours creating their own materials. However, with the advent of the Internet there are now a wealth of online resources for both language teachers and their students. With so many resources it’s sometimes difficult for teachers to see the wood for the trees.

How to use TV series, trailers and films in language class How many ways are there to use moving images in the classroom? English language teacher Svetlana Urisman, who won last month's TeachingEnglish blog award, shares her advice. Comment below this post if you have further tips. Why TV series are sometimes better than films One of my favourite things to watch are series - they are shorter, they let you come back to the characters again and again and predict what will happen to them next. Best Deep Grammar Check Help Do you want to perform a deep grammar check on your paper? If so, you may want to keep on reading to learn of the most effective way on how to do it right—with a grammar checker. See below for what exactly makes it reliable. It corrects spelling. This is obviously one of those writing departments where people struggle.

College Film & Media Studies Mise en scène encompasses the most recognizable attributes of a film – the setting and the actors; it includes costumes and make-up, props, and all the other natural and artificial details that characterize the spaces filmed. The term is borrowed from a French theatrical expression, meaning roughly “put into the scene”. In other words, mise-en-scène describes the stuff in the frame and the way it is shown and arranged. We have organized this page according to four general areas: setting, lighting, costume and staging. At the end we have also included some special effects that are closely related to mise-en-scène.

Lost Property This EFL lesson is designed around a beautiful short film titled Lost Property by Asa Lucander. Students do a dictation, work out meanings of the verb ‘lose’, speak about lost items, watch a trailer and short film, and write a story. Language level: Intermediate (B1) – Upper Intermediate (B2) Free Interactive English Issue 183 - Haircut rage Basic Vocabulary: Hair News story: Haircut rage Intermediate Grammar: Have something done News story: Haircut rage Advanced Vocabulary: Expressions with hair News story: Haircut rage Basic Vocabulary: Hair Film Scene Analysis: Cinematography and Mise-en-scène in American Beauty The aim of this video is to demonstrate how cinematic techniques are used to show meaning and visually express moods and themes. It uses two scenes from the movie American Beauty (American Beauty IMDb Page) —the two office scenes featuring Lester (Kevin Spacey) and Brad (Barry Del Sherman). I’ve kept the video short and simple, so it should be suitable for anyone interested in learning about movie making. The cinematic techniques discussed in the video are related to mise-en-scène collegefilmandmediastudies.com/mise-en-scene-2, which is the term used to describe everything ‘put into the scene’. In this video, I focus on décor, lighting and props, costumes, body language (e.g., posture, gestures and facial expressions) and composition. I also look at how these elements are framed in terms of camera height, camera angle and camera distance, all of which fall under the category of cinematography (classes.yale.edu/film-analysis/htmfiles/cinematography.htm).

Film Study Worksheet for a Documentary TWM's movie worksheets for documentaries are available through the following links: Film Study Worksheet for a Documentary and Film Study Worksheet for a Documentary that Seeks to Persuade on Issues of Political or Social Significance. The worksheets are designed to be copied on the front and back of one sheet of paper. ndla Characteristics Film Shoot Films are similar to novels or short stories in that they tell a story. They include the same genres: romantic, historical, detective, thriller, adventure, horror, and science fiction. However, films may also include sub-groups such as: action, comedy, tragedy, westerns and war. The methods you use to analyze a film are closely related to those used to analyze literature; nevertheless, films are multimedial. They are visual media made for viewers.

10 Wordless Videos that Teach Problem Solving - Speech is Beautiful I work in teletherapy, which means that I use a computer to display my materials and activities for my students. I have a couple extremely quiet older elementary students and I decided that video was a way to engage and encourage them to answer questions and retell events. In particular I wanted them to think about solving hypothetical problems. I found 10 WORDLESS videos on YouTube that show interesting problems and make kids think about how to solve a problem — and they have to provide the language! Piper Short Movie — A baby bird finds a way to survive a big wave. Ormie the Pig — A pig attempts to get a jar of cookies off of the top of the fridge.