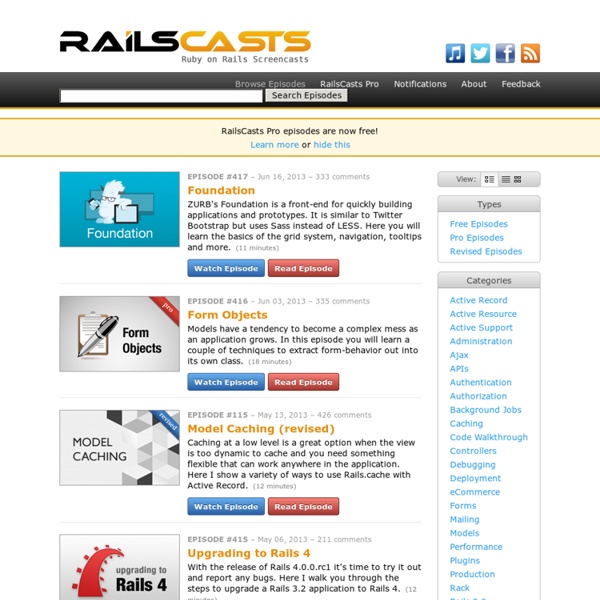 Ruby QuickRef Table of Contents Language General Tips A Ruby HOWTO: Writing A Method That Uses Code Blocks A Ruby HOWTO: Writing A Method That Uses Code Blocks One of the first things about Ruby which absolutely delighted me was its implementation of code blocks. They take a potentially ugly construct–anonymous delegates–and turn them into a readable, time-saving structure: Ruby on Rails 3.1 Release Notes 1 Upgrading to Rails 3.1 If you're upgrading an existing application, it's a great idea to have good test coverage before going in. You should also first upgrade to Rails 3 in case you haven't and make sure your application still runs as expected before attempting to update to Rails 3.1. Ruby on Rails Tutorial: Learn Rails by Example Michael Hartl Contents Foreword My former company (CD Baby) was one of the first to loudly switch to Ruby on Rails, and then even more loudly switch back to PHP (Google me to read about the drama).

21 Ruby Tricks You Should Be Using In Your Own Code Writing for Ruby Inside, I get to see a lot of Ruby code. Most is good, but sometimes we forget some of Ruby's shortcuts and tricks and reinvent the wheel instead. In this post I present 21 different Ruby "tricks," from those that most experienced developers use every day to the more obscure. Whatever your level, a refresh may help you the next time you encounter certain coding scenarios. Note to beginners: If you're still learning Ruby, check out my Beginning Ruby book. Rolling with Ruby on Rails by Curt Hibbs 01/20/2005 Editor's note: Curt Hibbs and Bill Walton have updated this tutorial for Rails 1.2 in Rolling with Ruby on Rails Revisited and Rolling with Ruby on Rails Revisited, Part Two. We recommend those tutorials for all new Rails development. Also check out Bill Walton's monthly series, Cookin' With Ruby on Rails. Maybe you've heard about Ruby on Rails, the super productive new way to develop web applications, and you'd like to give it a try, but you don't know anything about Ruby or Rails.

Ruby Programming/Syntax/Method Calls A method in Ruby is a set of expressions that returns a value. With methods, one can organize their code into subroutines that can be easily invoked from other areas of their program. Other languages sometimes refer to this as a function. A method may be defined as a part of a class or separately. Method Calls[edit] The Unofficial Ruby Usage Guide You may be interested to know that this document was originally written for internal use in the Operations department at Google. At the time, I was campaigning for the right to use Ruby on internal projects and I felt that a style and usage guide would probably assist in the battle for the language's acceptance, as the officially sanctioned languages at the time already had one. If nothing else, we'd at least all end up writing code that was easier to maintain. Over the last few years, Ruby has struck a chord with programmers as an excellent tool for -- amongst other things -- system administration. With that as our perspective, this document will suggest some guidelines for writing Ruby code in such a way that a common stylistic vocabulary may emerge, thereby increasing the ease with which source code may be read and shared. If you have questions about this document, please address them to its author, Ian Macdonald.

74 Quality Ruby on Rails Resources and Tutorials Learning Rails from scratch can be a pain. But don't fret, this guide provides the best Rails resources the Web has to offer. Ruby on Rails is quickly becoming one of the most popular modern programming language framework combinations. Specifically, Ruby is a programming language that has been around for a few years and Rails is a framework for Ruby that is a bit newer and is just about the hottest thing in application and web development right now. Rails' seamless integration into web servers and databases and its elegant framework make it the ideal candidate for every programmer wishing to develop the latest and greatest web application. However, as is the case with any language or framework, learning Rails from scratch can be quite a pain.