Someone Has Built It Before 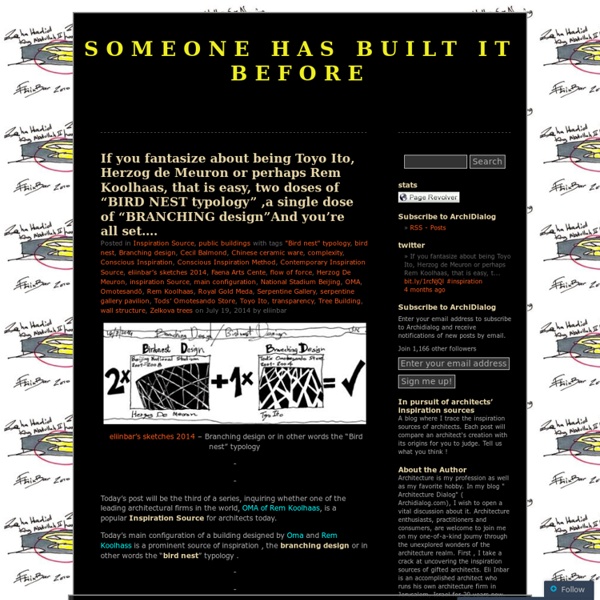 Nonscandinavia: an open-source, image collection for the rest of the world anchor Nonscandinavia is an open-source collection of images "dedicated to increasing diversity in architectural representation." Credit: Nonscandinavia We believe that renderings reflect our aspirations as architects, and that our decisions about representation matter. Renderings should reflect the people in and around the site, and should project a future that values diversity and acceptance of all people. The goal of NONSCANDINAVIA is to give young architects and students access to a database of free, high-res, PNG images that reflect diversity in all its forms cityofsound The primary interface between the UK’s planning system and the people and places it serves is a piece of A4 paper tied to a lamppost in the rain. OK, not always rain. But rain often enough. The paper is a public notice describing a planning application for some kind of ‘development’ somewhere in the vicinity.

Ridiculously Imaginative Playgrounds by Monstrum Danish firm Monstrum, founded by Ole B. Nielsen and Christian Jensen, are responsible for some of the most brilliant playscapes I’ve ever seen. From life-size blue whales, giant serpents, and wobbly castles, any one of these would have been my dream come true as a child. Allhitecture Images of a major project that will transform a key precinct of Sydney are to be featured in an exhibition at the prestigious Museum of Modern Art (MoMA) in New York. The images are digital renderings of the HASSELL + Populous designed Sydney International Concept & Competition concept design culture featured ftnews HASSELL MoMA in New York museum Museum of Modern Art New York Populous USA

Super Colossal [Spoilers. Probably] Inception has been receiving its deserved attention. Primarily because it is a very good, smart action movie, but also, at least in this neck of the woods, because it is about urbanism, game design, and has characters described as architects. Of particular interest to me though is the portrayal of the generic downtown in Christopher Nolan’s last three films; Batman Begins, The Dark Knight and now, Inception. MAX GERTHEL - architecture under siege I’m in Sweden on a long-awaited vacation for the next two weeks, having spent the Swedish unofficial national holiday Midsummer with friends in our family house on the south east tip of the country. Despite the extraordinary setting and great dinner party – orthodox with pickled herring, fresh boiled potatoes and sweet strawberries with cream – we struggled to keep warm in the refreshing but chilly north atlantic winds and finally I decided to cut my stay short and go back to the city (Malmö). Truthfully I was very fed up with Beijing towards the end and coming back here for a short but familiar visit will really help me put things in perspective.

A Book Review in Conversation: Small Scale Solutions Keith Moskow and Robert Linn Princeton Architectural Press (2010) Fellow Polis blogger, Melissa Garcia Lamarca, and I recently hunkered down with Moskow and Linn’s sojourn into small-scale urban interventions by architects for “making life better for city dwellers” around the world (as the authors describe in the book’s introduction).

Ideal Home: 1980 True it had shortwave remote control cubes to control all the mod cons and self-cleaning bathrooms that would have made a cheap hotel chain proud, but note the plastic paneling; the hard, slippery floor; the dead, sterile decor; the painfully uncomfortable furniture; and the pointless pillow on the floor. I don't know if we should be more grateful that we dodged this or the clothing.