How to Whistle With Your Fingers 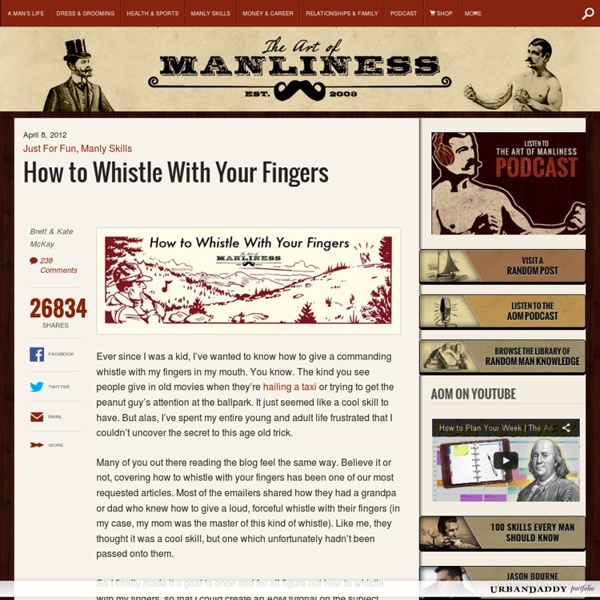 QR Hobo Codes: Secret-Symbol Stencils for Digital Nomads QR Hobo Codes: Secret-Symbol Stencils for Digital Nomads Article by Urbanist, filed under Street Art & Graffiti in the Art category. This project tackles what is probably the last place anyone expect to find a digital-age intervention: the centuries-old tradition of the mobile and homeless communicating via shorthand markers, left to denote different risks and advantages to illicit living spaces. From its creators at Free Art & Technology: “These stencils can be understood as a covert markup scheme for urban spaces — providing directions, information, and warnings to digital nomads and other indigenterati. We present these as modern equivalents of the chalk-based “hobo signs” developed by 19th century vagabonds and migratory workers to cope with the difficulty of nomadic life.” As ingenious as this all is, the question, of course, remains: even in an age where almost everyone has a cellular phone, how many truly nomadic peoples have one?

Men's Health Dads : Parents : Raise Kids Like a Man Rule #5 Don't Spend More Than 15 Minutes in Any Store. Like most kids, mine thought of the grocery store as a giant toy store for the palate. We'd spend half an hour looking at every cereal box with a Disney character on the front. Here's how it works: Before we leave for the supermarket, I make a shopping list. At the store, I load both kids into the front of a race-car cart. My kids love speed shopping. Rule #6 Be buddies with your kids. Truth is, I conceived of this rule out of necessity. So, essentially, I've given up all the male bonding in my life. My son and I play basketball regularly, and we have backyard water battles with the neighbor kids. I really don't miss hanging with the guys at the office anymore. Rule #7 Don't Become Mr. Had my wife decided to stay home, my daughter most certainly wouldn't have learned to appreciate a good deal on a miter saw or know that the best time to get an oil change is midday during the week, after a nap. But it was the right thing to do.

5 Travel Workouts for On-The-Go Exercise There’s no reason summer travel plans should derail your workout routine. You can get a travel workout as good as any gym can deliver by knowing a few key techniques and concepts. All of these exercises are good as standalone workouts, or as components to interval training when used in combination. For starters, pick any three of these travel workouts. Vertical Jumps In case you haven’t tried it since you were a kid, jumping in place is one of the most taxing activities ever. Sprints What could be simpler than sprinting? Push-ups Aside from being one of the most versatile and effective exercises on the planet, push-ups require less space and equipment than virtually anything else. Jump Rope The jump rope is the only piece of equipment on this list, and is just about the easiest accessory to pack in your travel bag. Burpees This old military exercise—a push-up-slash-jumping jack—has been adopted by Crossfitters because it wallops all your major muscle groups.

Seafood Watch Program | A Consumer's Guide to Sustainable Seafood Of Men and Manhood: A Virile Collection of Quotes When putting together our two paperback books, we sought to pepper the text in each with quotes about men and manhood. What we quickly discovered was that no comprehensive source for such quotes existed. You could find a few on general quote collection sites, a smattering on other websites, and some in books. But there was no repository that brought them all together. I finally decided to create such a collection myself, and below you will find the result. When it comes to quotes about manhood, you could conceivably include ones that touch on the different qualities of manhood, i.e., quotes on courage, strength, resolution, etc. “To have done no man a wrong…to walk and live, unseduced, within arm’s length of what is not your own, with nothing between your desire and its gratification but the invisible law of rectitude—this is to be a man.” “You have to be a man before you can be a gentleman.” “A male was transformed into a man by the willful expenditure of energy.

Here's What Happens to Google Employees When They Die It’s no surprise that the employee benefits of Google (GOOG) are among the best in the land—free haircuts, gourmet food, on-site doctors and high-tech “cleansing” toilets are among the most talked-about—but in a rare interview with Chief People Officer Laszlo Bock I discovered that the latest perk for Googlers extends into the afterlife. “This might sound ridiculous,” Bock told me recently in a conversation on the ever-evolving benefits at Google, “But we’ve announced death benefits at Google.” We were scheduled for a talk on Google’s widening age-gap (the oldest Googler is currently 83); I wanted to know how child- and healthcare benefits have evolved as the company has scaled. [More from Forbes: How To Handle A Personal Crisis At Work] Instead, Bock, who joined the company in 2006 after a stint with General Electric, blew me away by disclosing a never-before-made-public-perk: Should a U.S. [More from Forbes: 11 Tips For Dealing With A Lazy Co-Worker] FinanceBusinessGoogle

The perfect full beard. What’s So Bad About a Boy Who Wants to Wear a Dress? Lindsay Morris Above, a boy prepares for a fashion show at a camp for gender-variant children and their families. More Photos » When Alex was 4, he pronounced himself “a boy and a girl,” but in the two years since, he has been fairly clear that he is simply a boy who sometimes likes to dress and play in conventionally feminine ways. There have always been people who defy gender norms. Many parents and clinicians now reject corrective therapy, making this the first generation to allow boys to openly play and dress (to varying degrees) in ways previously restricted to girls — to exist in what one psychologist called “that middle space” between traditional boyhood and traditional girlhood. “It might make your world more tidy to have two neat and separate gender possibilities,” one North Carolina mother wrote last year on her blog, “but when you squish out the space between, you do not accurately represent lived reality.

What My Son's Disabilities Taught Me About 'Having It All' - National Because of her child's problems, the author will never have a tidy, peaceful life. But none of this keeps her from being happy -- as long as she asks herself the right questions. The author on a walk with her son (Photo by Karl H. As someone in her 40s, unequivocally in middle age, I find myself and my friends in that stage of life that seems to auger constant assessment -- am I happy? Evidenced by the number of times Anne-Marie Slaughter's Atlantic piece "Why Women Still Can't Have It All" was posted on Facebook, it served as a cri de coeur of the collective unconscious of those of us swimming in the Gen X/Baby Boomer estuary, last stop before becoming truly elderly. Let me compare and contrast that with a typical incident that happened just last week in my own 40-something working mother life. While our friends worry about middle schools, we bring our son to the ER to get stitches after he puts his head through a window. I nodded. I nodded again. He waited, seemingly perplexed.