52 Habits To Change Your Life 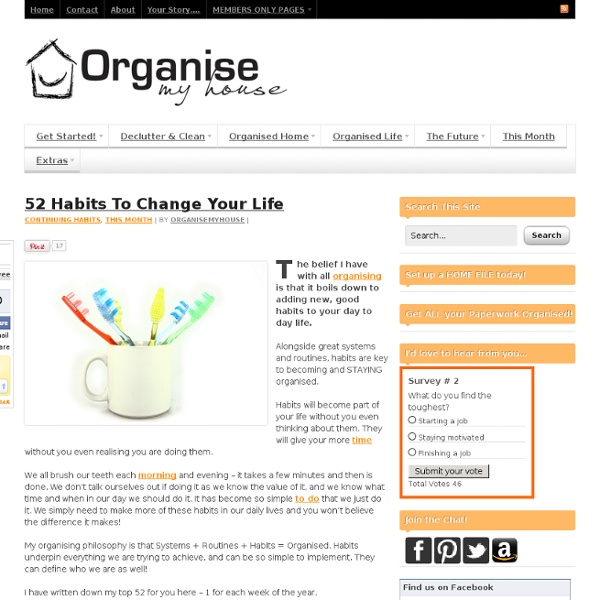 66 117EmailShare The belief I have with all organising is that it boils down to adding new, good habits to your day to day life. Alongside great systems and routines, habits are key to becoming and STAYING organised. Habits will become part of your life without you even thinking about them. We all brush our teeth each morning and evening – it takes a few minutes and then is done. My organising philosophy is:- Systems + Routines + Habits = Organised Habits underpin everything we are trying to achieve, and can be so simple to implement. I have written down my top 52 for you here – 1 for each week of the year. Its a great challenge to see how far you come in a year – thats enough time to really change your life and set a way forward that you can really achieve and stick to. Of course, some you may already be doing – and some may not suit the way you live (or who you live with etc…), so feel free to make a list of your own – let this be your inspiration! Eat 5 a day – at least!

9 habits that may do more harm than good The basics of staying healthy seem pretty easy to follow: Eat well, exercise, get enough sleep and you should be on the right track, right? Surprisingly, it can be more complicated than that. Oftentimes the very choices we make to benefit our health can be the same ones that hurt us in the long run. 1. If you reach for hand sanitizer any time you make contact with the outside world, you might want to take pause. 2. Who isn't tempted to buy the latest skin creams and serums promising to shed years from your face? 3. Forgoing sky-high heels and toe-pinching boots for the freedom of flip-flops is giving your feet a much-need break, right? 4. Rushing to brush immediately after every meal may seem like a great way to keep your oral health in check, but according to Greg Diamond, DDS, a New York City periodontist, it's better to hold off. 5. 6. 7. By reaching for a bottle of H20 you may think you're doing your body some good by avoiding tap water, which can be filled with who-knows-what. 8.

10 Golden Lessons from Albert Einstein Every day I remind myself that my inner and outer life are based on the labors of other men, living and dead, and that I must exert myself in order to give in the same measure as I have received and am still receiving - Albert Einstein Albert Einstein was an amazing physicist. He figured out so many universal principles and equations that he was way ahead of his fellow scientists at any point of time. 1. Most people don’t try new things because of their fear of failure. 2. 30 years from now, you won’t possibly remember what chapters you had in your science book; you’d only remember what you learn on your way. 3. When you reflect on how far we humans have come from the prehistoric caves to mind-blowing technological advancements, you would feel the power of imagination. 4. Creativity and uniqueness often depends on how well you hide your sources. 5. If you think of all the top people in the world, they would have added something of value to the world. 6. 7. 8. 9. 10.

How to Get Oragnized - 100 Organizing Tips The meals, the kids, the housework, the job…the only way to stay sane is to get organized. Fat chance, you say? Remember, the goal of organizing isn’t to make your house pristine; it’s to make your life more functional. So don’t straighten for neatness sake—create an organized foundation for all the roles you play. The Housekeeper 1. 2. 3. 4. 5. 6. 7. 8. 9. 10. 11. 12. 6 fascinating people who own almost nothing Most of us can only handle stacking, storing and stepping over our stuff for so long before we start to feel claustrophobic. We go on a cleaning spree and give (or sell) it all away. But that's only a temporary fix. Living small requires a more permanent shift. You might find it hard to believe, but there is a growing demographic of people convinced that no person needs a house full of possessions to survive. These aren't tent-dwelling hippies, but successful, intelligent individuals and families who have rejected the stuff-cluttered life for something more meaningful. On the brink of turning 30, Millburn and Nicodemus (pictured above) discovered that working 70-80 hours a week for a corporation and buying more stuff didn’t fill the void. Photo courtesy of guynameddave.com We often dismiss lifestyles of few possessions as something reserved for college kids and bohemians, but who ever said age sentences us to a prison of clutter? Andrew Hyde - Author and vagabond Photo: ManVsDebt.com

15 famous people who mysteriously disappeared The Lost Roanoke Colony. The Dyatlov Pass Incident. The death of Natalie Wood. We love a good unsolved mystery, and unexplained disappearances that have managed to baffle historians have also intrigued the general public. In a majority of these cases, the unaccounted-for person was legally declared dead at some point, although their body has never been recovered and their whereabouts are still unknown. So cue up the appropriate music and join us as we delve into the realm of the mostly unknown. Who: Henry Hudson Missing since: 1611 Where: James Bay, Canada Henry Hudson (a.k.a. the famed British navigator who has a river, bay, straight, town, bridge, etc. named after him) must have been a rather pushy fellow to work for. Not a whole lot of particulars are known about the mutiny that ended Hudson's fourth expedition as only a handful of the Discovery's crew survived the voyage back to England to stand trial. Who: Amelia Earhart Missing since: 1937 Where: The Pacific Ocean Who: Harold Holt

IHeart Organizing The Art of Getting Started This is my first blog for , and I've decided to begin at the beginning. Like many writers, I dread the start of a new piece of work, or, to put it more accurately, I dread the of the start. To begin anything is to open myself up to the possibility of failure and disappointment, two things nobody enjoys very much. Ideally, I would only ever embark on projects that were guaranteed to be perfect both in conception and execution, and were therefore also guaranteed to be anxiety-free, but as it is I am a real person doing real things in the real world, so my choice is to face the anxiety - the feeling I mentioned earlier - or never get anything done ever. Perfectionism is, apparently, functional for some people. More often, though, it's caused me grief . It wasn't until my mid-30's, when I was finally diagnosed with Obsessive Compulsive Disorder, that I really understood what had been going on in my head and in my college room.

Confessions of a startup: all our numbers, insights, everything — Looking forward, a blog by Lookback It's already been over a year since we started developing Lookback. In that time we've managed to raise $2.2M in seed financing, have signups from companies like Facebook, LinkedIn and Yahoo, have over 30,000 user experiences uploaded to our platform... and make lots of mistakes along the way. And today we're sharing it all, in a transparent way. How we got our investment, all our growth numbers, customers, finances, our mistakes and insights. Although we still have lots left to learn and achieve, this post is us giving back and saying thanks for the journey so far. 1. We decided early on to go the investment route to give ourselves runway and build a team around us. We called a friend who knew the ins and outs of VC investments and asked how it works. We failed completely. We had no idea. Let's just say they didn't exactly look thrilled. A couple of meetings down the road, however, we did get a go-to-market strategy. It turns out getting an investment is a lot like speed dating. 2. 3.

Free Downloads Are you looking to simplify and organize your life? Choose from a variety of FREE planning forms below. You can download each form individually by clicking on the form’s name, or you can download all the forms in one category as a single file by clicking on the Master List beneath the heading. Feel free to print as many as you need! Budgeting Workbooks: Budgeting Workbook — this is the workbook I use to track all our finances. Daily Planners: Read more about how I use my daily planner. UPDATE: you can now get the Single planner in a fully editable format here. My Daily Planner – Single — This is the worksheet I use every day. Meal/Menu Planners: Shopping Planners: Shopping List: Organize your weekly shopping and easily pair coupons with in-store specials. Food Preserving Worksheets: Holiday Planner: Gift Inventory — Track your gift ideas, gifts purchased, and your spending. Miscellaneous: