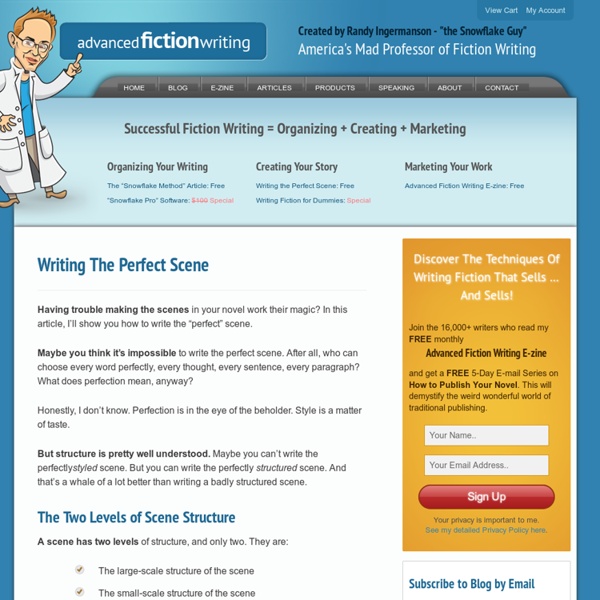 Having trouble making the scenes in your novel work their magic? In this article, I’ll show you how to write the “perfect” scene. Maybe you think it’s impossible to write the perfect scene. After all, who can choose every word perfectly, every thought, every sentence, every paragraph? What does perfection mean, anyway? Honestly, I don’t know. But structure is pretty well understood. The Two Levels of Scene Structure A scene has two levels of structure, and only two. The large-scale structure of the sceneThe small-scale structure of the scene This may seem obvious, but by the end of this article, I hope to convince you that it’s terribly profound. Before we begin, we need to understand how we keep score. Your reader is reading your fiction because you provide him or her with a powerful emotional experience. If you fail to create these emotions in your reader, then you have failed. Large-Scale Structure of a Scene The large-scale structure of a scene is extremely simple. GoalConflictDisaster

Emotional Scenes Without Melodrama by Anne Marble Emotional scenes are, of course, crucial to romances. A romance is a novel about two people falling in love and defeating their problems together. So without the emotions, one of the most important parts of the romance is missing. Because a romance novel is a novel, conflict must drive the plot -- and sometimes, that conflicts stems from the relationship of the hero and heroine. 10 Tips on Writing Strong Scenes For a Novel or Story Any story or novel is, in essence, a series of scenes strung together like beads on a wire, with narrative summary adding texture and color between. A work of fiction will comprise many scenes, and each one of these individual scenes must be built with a structure most easily described as having a beginning, middle and end. The beginning of each scene is what we’ll address here. The word beginning is a bit misleading, since some scenes pick up in the middle of action or continue where others left off, so I prefer the term launch, which more clearly suggests the place where the reader’s attention is engaged anew. Visually, in a manuscript a new scene is usually signified by the start of a chapter, by a break of four lines (called a soft hiatus) between the last paragraph of one scene and the first paragraph of the next one, or sometimes by a symbol such as an asterisk, to let the reader know that time has passed.

3 Tips for Writing Heavy Emotional Scenes Yesterday, I tweeted a link to a great post by Sally Apokedak about not cheating the reader by skipping emotional scenes. Some writers struggle with heavy scenes. They’re uncomfortable with “invading” the privacy of their characters. 21 Writing Prompts for Setting a Scene in Your Novel When you’re writing (or rewriting) a scene, do you ever get the feeling you just don’t have enough to say? Sure, there’s the action–but what about all the extra bits meant to flesh out your story? While I don’t encourage overwriting for the sake of word count, meaningful details can help you establish setting and atmosphere. Last week, I sat down with John Banville’s Booker Prize winning novel, The Sea–a book that features prose I admire–and took careful notes about how the author managed to effectively set certain scenes. Here’s just one of its many beautiful passages :

The Emotional and Psychological World of You and Your Characters By Rachel Ballon "Only connect the prose and the passion,and both will be exalted." - E. M. Forster Emotions are the lifeblood of characters and of stories. Settings in Your Novel That Work As Triggers When choosing settings for your scenes, you want to think about the kinds of places that will allow the emotions, needs, dreams, and fears of your characters to come out. Certain places will trigger these things to come to the surface and will stir memories. Your character has a past, and even if she never visits any of the places in her past in your novel, other places can draw out feelings and memories. This happens to us all the time.

Article: Beware the Violins - How to Avoid Melodrama in Your Writing ~ RukhsanaKhan.com By Rukhsana Khan For the beginning writer, searching to write a poignant and dramatic piece, there is always the possibility of overshooting the target. Instead of achieving poignancy they get something that’s maudlin.

Al's Writing Block: Writing: How to Describe a Room I've noticed lately in the stats that people have been actively searching for "how to describe a room." Even though I had done a writing prompt that called for using the description of a room, I never did go over the particulars of describing locations. So for anybody looking for some specific answers, here are my thoughts on describing interior settings, for fiction and prose. First and foremost, you got to ask yourself, what importance is the room or setting to the story or characters?

Common Cliches in Writing It’s not enough to love our story ideas. We need to weigh their suitability as subjects for fiction, and then figure out how to go about making use of them. This means steering clear of cliché and its sappy cousin—melodrama. Here are 10 tips to help you do just that. (Note: This article is about cliched themes, not phrases.

8 Ways to Write Better Characters The very first novel I, aged 20-something, wrote, is unpublished and will stay that way. An ensemble coming-of-age story of four teenagers, its weaknesses are legion: tame story line, thin action, unimaginatively rendered settings, hackneyed themes (though I will say the dialogue wasn’t bad). Having now published seven novels, I look back on that manuscript and realize that underlying the shortcomings I just mentioned lies its principal flaw: poor character development. Avoid Overactive or Inactive Supporting Characters When Writing A Novel One of the most common plot problems writers face is mistaking minor characters and subplots for the main character and primary plot. In the following excerpt, Joseph Bates, author of The Nighttime Novelist, discusses overactive or inactive characters and subplots and how they can impact your story. Overactive or Inactive Supporting Characters If in the second act you find your novel veering off course either because a minor character has come in and tried to run the place, or because your minor characters seem to be doing nothing but sitting on your couch, eating your food, not really contributing, you should put them to the test: determine why they’re there, if they can be brought in line somehow, or, if not, how you might excise them from the novel. If an inactive supporting character does indeed seem to fulfill some function like this—but is otherwise inert—you might see if another and better-established supporting character might fulfill that role just as easily.

Seven Common Character Types Seven Common Character Types by Terry W. Ervin II Fiction writers employ a variety of characters while weaving their tales. Beyond the standard definitions of protagonist (the main character in a literary work) and antagonist (the main character or force that opposes the protagonist in a literary work), recognizing the types of characters and the parts they play while reading an interesting story can add to the experience. In addition, a fuller understanding of the character types and their uses can increase a writer’s effectiveness in weaving his own fictional tales.