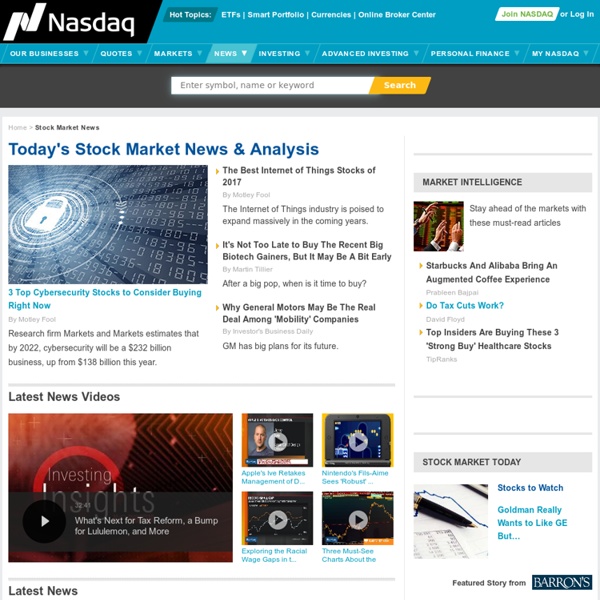 Visa, Samsung ink global NFC deal in what could signal a Galaxy S4 feature Near Field Communication (NFC) is steadily gaining popularity, but not fast enough for some people. In fact, Visa and Samsung announced today a global alliance to accelerate the spread of NFC technology on mobile devices. With the agreement, Samsung will start preloading Visa's contactless payment applet, payWave, onto "selected next-generation" NFC devices.

From Facebook to Twitter: Save Your Community From Redundancy Caroline Chen | March 10, 2011 | 8 Comments inShare107 By understanding the nuances of each platform's digital culture, you can create unique and relevant content, speak the right language, and effectively grow both communities. A Colossal Fracking Mess Fracking is an energy- and resource-intensive process. Every shale-gas well that is fracked requires between three and eight million gallons of water. Fleets of trucks have to make hundreds of trips to carry the fracking fluid to and from each well site. Due in part to spotty state laws and an absence of federal regulation, the safety record that hydraulic fracturing has amassed to date is deeply disturbing. As use of the technique has spread, it has been followed by incidents of water contamination and environmental degradation, and even devastating health problems.

Finland's Nuclear Waste Solution World's Youngest Uranium Mine Click on image to see illustration. Finland might seem like an odd place to find cutting-edge nuclear waste technology. The country isn’t accumulating waste on a scale anywhere near that of other nuclear nations, such as France, Japan, the United Kingdom, and the United States. Nonetheless, Finland’s four reactors account for one-quarter of the country’s electricity production, making them the single largest contributor to Finland’s energy mix. The origins of the Finnish nuclear program, in the 1970s, help to explain the country’s interest in disposal. In 1979, a reactor at the Three Mile Island plant, in Pennsylvania, experienced a partial core meltdown, forcing Finnish officials to take a harder look at their own fledgling nuclear effort.

LIBOR Scandal’s Ripple Effect Months after British banking institution Barclay’s confessed its involvement in rate fixing of the London Inter Bank Overnight Rate (LIBOR) and possibly costing people billions, the effects are still being pondered in the courts and investment circles. Now more banks have been implicated and it’s thought that LIBOR rates affected $800 trillion in transaction, some of which included real estate deals. Specifically, the bank set higher rates after the 2008 financial collapse to sweeten its position, then falsely lowered them later on, and both moves likely had people paying higher rates, or losing money on lower rates, and the courts are so backed up that the presiding judge has suspended new lawsuits until the ones already filed are processed.

Smartphones out-ship feature phones worldwide for first time - GadgetBox on NBCNews.com Devin Coldewey , NBC News – 6 hrs. A new report on the mobile phone industry shows that for the first time ever, there are more smartphones being shipped worldwide than feature phones. Samsung and Apple are leading the charge. The first quarter of the year is as slow as it usually is, according to the IDC report , but this particular Winter quarter is a special one. Of the approximately 418.6 million mobile phones shipped in the first three months of 2013, 216.2 million were smartphones — an historic 51.6 percent. The United States is a bit ahead of the curve: At least two-thirds of all phones bought here are smartphones.

How Small Businesses Can Use Social Media for Customer Service [INTERVIEW] This post originally appeared on the American Express OPEN Forum, where Mashable regularly contributes articles about leveraging social media and technology in small business. Customer relationship management isn't just the domain of big brands, and these days, more and more companies are offering free online tools to make it easier for SMBs to keep track of and reach out to their customers. For some SMBs — whether they're brick-and-mortar shops or online businesses — being able to monitor customer feedback, respond to complaints and help answer questions across a wide variety of websites is incredibly valuable, and it establishes a rapport with customers, who are likely to spread the word and praise the SMB for its outreach. To get a better understanding of what the CRM tasks are and the best tools to accomplish them, Mashable spoke with Marsha Collier, who wrote the book on online customer service.

Fracking: The Great Shale Gas Rush The Pennsylvania homes of Karl Wasner and Arline LaTourette both sit atop the Marcellus Shale, a geologic formation that stretches from Tennessee to New York and holds vast deposits of natural gas. They also sit on opposite sides of a national debate over hydraulic fracturing, or fracking. That's the process that makes it economical for energy companies to tunnel 5,000 feet below ground and remove the gas—but also poses environmental risks. Greenwashing after the Phase-Out: German 'Energy Revolution' Depends on Nuclear Imports - SPIEGEL ONLINE - News - International The nuclear power plant in the Czech village of Temelin, barely 100 kilometers (62 miles) as the crow flies from the Bavarian city of Passau, has a reputation for being particularly prone to malfunctions. Over the years, there have been 130 reported incidents here. Sometimes it's a generator that fails; at others, a few thousand liters of radioactive liquid leak out of the plant. "The entire facility needs to be shut down immediately," says Rebecca Harms, a member of the European Parliament representing Germany's Green Party.

Libor: First change it, then render it obsolete The CFA Institute recently interviewed 1,259 of its members from all around the world and from every aspect of the financial-services industry to ask them about Libor. And the results are clear: Clearly no one believes that Libor makes any sense the way it’s currently set up. Libor, CFAs are agreed, should reflect actual interbank borrowing rates, not some hypothetical estimated rate at which banks think they could probably borrow if they wanted to. What’s more, Libor submission should be a regulated activity (70% agree, 18% disagree); and the regulator should have criminal sanctions available to it (82% agree, 9% disagree). Mobile phone data redraws bus routes in Africa 30 April 2013Last updated at 19:02 ET By Jane Wakefield Technology reporter The project suggested two new bus routes and an extension to an existing one Researchers at IBM have redrawn the bus routes of Ivory Coast's largest city using mobile phone data. The research was completed as part of the Data for Development competition run by Orange which released 2.5 billion call records from five million mobile phone users in Ivory Coast. The anonymised data is the largest of its kind ever released.

5 Huge Trends in Social Media Right Now What's the first thing young women do when they wake up? Check Facebook. How do enterprise employees pass the time at work? With social media. With so many studies highlighting ever-accelerating social media usage rates, the conclusion is obvious — social media is everywhere. What follows are five of the hottest social media trends right now. Fracking Fracking (also often referred to as hydraulic fracturing or hydrofracking) is a process stimulation procedure first used by the oil and gas industry in 1947 at a well in the Hugoton gas field located in Kansas. Hydraulic fracturing was first used commercially in 1949. The premise is simple, fluids are forced under pressure into the formation surrounding the wellbore. Once those fluids reach the fracture gradient of the surrounding rock the rock parts and fluid continues to flow further from the wellbore.

Banks Sued by U.S. Homeowners Over Rigging of Libor Benchmark U.S. homeowners filed a lawsuit against 12 banks, including Barclays Bank Plc and JPMorgan Chase & Co. (JPM), claiming that manipulation of the benchmark Libor lending rate made their mortgage repayments more expensive. Traders at banks in Europe and North America such as UBS AG (UBSN), Bank of America Corp. and Royal Bank of Scotland Group Plc (RBS), “unjustly enriched themselves” by manipulating the rate, according to the complaint. That allowed them to increase the payments by homeowners on adjustable rate loans, boosting profit, according to the lawsuit.