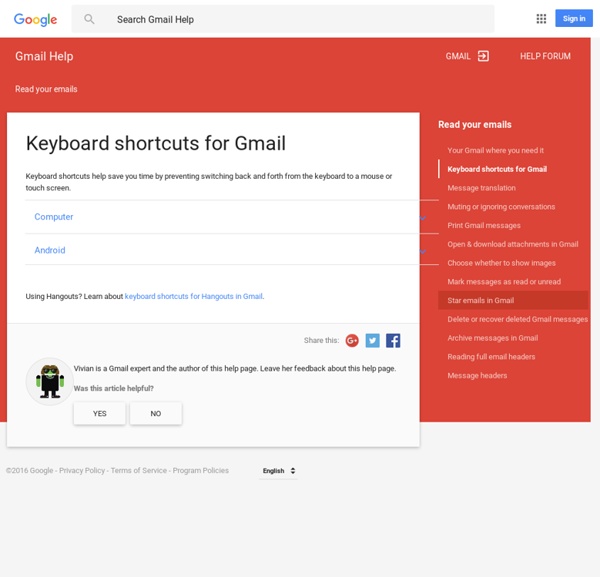 Google Chrome Keyboard Shortcuts - Keyboard Shortcuts For Google Chrome For Windows - About Web Browsers Below is a list of keyboard shortcuts that can be used in Google Chrome for Windows. These shortcuts can be utilized for a variety of purposes, ranging from opening Chrome's internal Task Manager to sending the active Web page to your printer. CSS3 Cheat Sheet (PDF) Advertisement Just last week we released an extensive printable HTML 5 Cheat Sheet that lists all currently supported HTML 5 tags, their descriptions, their attributes and their support in HTML 4. In comments to this post we received many requests for a similar CSS 3 cheat sheet that would present the main features of CSS 3 in a handy, printable reference card. So we asked our friend Chris Hanscom from Veign.com (who created the HTML 5 cheat sheet) to create a quick reference card for CSS 3. In this post we present a printable CSS 3 Cheat Sheet (PDF), a complete listing of all the properties, selectors types and allowed values in the current CSS 3 specification from the W3C. The cheat sheet was done in the same format as the CSS 2 Reference Guide that you may want to use for your projects as well. Download the CSS 3 Cheat Sheet for free! preview (.gif, 1255×882px)download the pdf (5 pages, 123 Kb) Thank you very much, Chris Hanscom! Further Resources About CSS 3 Do you use CSS 3 already?

World War II in Europe Timeline: November 9/10 1938 - Kristallnacht, the Night of Broken Glass - Pale Moon A massive, coordinated attack on Jews throughout the German Reich on the night of November 9, 1938, into the next day, has come to be known as Kristallnacht or The Night of Broken Glass. The attack came after Herschel Grynszpan, a 17 year old Jew living in Paris, shot and killed a member of the German Embassy staff there in retaliation for the poor treatment his father and his family suffered at the hands of the Nazis in Germany. On October 27, Grynszpan's family and over 15,000 other Jews, originally from Poland, had been expelled from Germany without any warning. They were forcibly transported by train in boxcars then dumped at the Polish border. Terms of use: Private home/school non-commercial, non-Internet re-usage only is allowed of any text, graphics, photos, audio clips, other electronic files or materials from The History Place.

Know of an iOS app that supports "Send to OmniFocus"? Post here! Read It Later Pro now supports Send to OmniFocus (StOF). If you're familiar with Instapaper, it's essentially the same thing, it allows you to bookmark and read material offline. I have both, and since the latest release, have been blown away by how much better RIL is against Instapaper but, as always, YMMV! Like Instapaper, RIL maintains a very simple interface but also hides an extensive range of features behind actions such as swiping left to right in list view or doing a two-finger tap when reading an article. It also allows you to switch between pure text and graphic modes, which helps when trying to download things such as bulletin board threads etc. for later reading, which often come a cropper in Instapaper. I've asked Nate (the developer) to see if it would be possible in a future release to have the StOF function send two links to the note field in OF, a live link to the source and another one to the stored offline material held locally within the App.

15 Coolest Firefox Tricks Ever Everybody’s favorite open-source browser, Firefox, is great right out of the box. And by adding some of the awesome extensions available out there, the browser just gets better and better. But look under the hood, and there are a bunch of hidden (and some not-so-secret) tips and tricks available that will crank Firefox up and pimp your browser. Make it faster, cooler, more efficient. Get to be a Jedi master with the following cool Firefox tricks. 1) More screen space. 2) Smart keywords. 3) Keyboard shortcuts. Spacebar (page down)Shift-Spacebar (page up)Ctrl+F (find)Alt-N (find next)Ctrl+D (bookmark page)Ctrl+T (new tab)Ctrl+K (go to search box)Ctrl+L (go to address bar)Ctrl+= (increase text size)Ctrl+- (decrease text size)Ctrl-W (close tab)F5 (reload)Alt-Home (go to home page) 4) Auto-complete. 5) Tab navigation. Ctrl+Tab (rotate forward among tabs)Ctrl+Shft+Tab (rotate to the previous tab)Ctrl+1-9 (choose a number to jump to a specific tab) 6) Mouse shortcuts. 8) User chrome.

Graphical vi-vim Cheat Sheet and Tutorial Learning vi or vim is not easy. But it doesn't have to be that difficult, either. It is, in any case, faster, more powerful, and more productive than editing with any other editor, so you would do very well in investing the time and effort to learn it. Being a vi lover myself, I came up with the idea of providing a graphical cheat sheet for those learning vi or vim, and I also found out it was a very good way to structure a tutorial. Here are the results for your learning enjoyment (or your colleagues'). By the way, I recently published the definitive article explaining why vi/vim editing is so much better than regular editing. Graphical cheat sheet This is a single page describing the full vi/vim input model, the function of all keys, and all major features. Graphical cheat sheet based tutorial The tutorial above is structured in 7 lessons that cover the major commands in vi/vim. Notes With the single exception of the external filter feature ("!") Relevant links Why, oh why, do those #?

Gentle, Public Activism: Magnusson’s I-75 Project » Sociological Images - Pale Moon Don Waisanen at Thick Culture highlighted Norm Magnusson’s I-75 project. The project involves installing historical markers with a primarily political instead of historical message. Some examples: About the project, Magnusson writes: …unlike most artworks on social or political themes, these markers don’t merely speak to the small group of viewers that seek out such work in galleries and museums; instead, they gently insert themselves into the public realm. Waisanen concludes: That the project is as much about the use of wide-open public spaces as it is about the carefully crafted messages speaks volumes about how innovation may best work in our age.

Tinderbox « Welcome to Sherwood Time to get back to writing about Tinderbox. I’ve been trying to find the ideal set up for managing a day book. Being a constant fiddler, I’ve danced from application to application, but I’ve now determined that Tinderbox will serve this purpose well. [If you haven't already read my previous entries about Tinderbox, it would be helpful if you did.] A day book is where I intend to collect miscellaneous chunks of information that are related primarily by their type and date. In Tinderbox I can create prototypes that prompt me for specific bits of data that relate directly to the type of information I am collecting. Image 1: The book note prototype I created for my Tinderbox "Day Book." You can see from the screen-capture of the book note prototype that I am set to capture the data I want to record about the books I’m reading (or intend to read). Another advantage of Tinderbox is its versatility for organizing and presenting this information.  Doesn’t look very complicated, does it?

How I Use Notebooks Despite the fact that I do use several apps in my productivity workflow, I have a tendency to use paper a lot as well. As a matter of fact, paper is often my first method of capture for a variety of reasons, such as: It doesn’t require recharging, so it never runs low on juice.There are far fewer limitations to paper; whereas apps on a device do.I can have multiple notebooks available to me (one on my nightstand, one in my jacket, one in my travel case, etc.), which isn’t the case for my devices. But I don’t use them as a means to keep a to-do list. Here is what I use notebooks for: Capturing ideas for posts and projectsDoing quick brain dumpsOutliningMind mapping Ultimately, however, I use notebooks to connect myself with the things that are most important to me on a daily basis. Again, the colours create a firmer connection for me. I’ll use a junior legal pad or a larger notebook on my desk, which is what I’ll use for outlining, brain dumps, or mind mapping. I’m a notebook fan.

Tools 4 noobs - tools you didn't even know you needed