International Institute for Conservation of Historic and Artistic Works 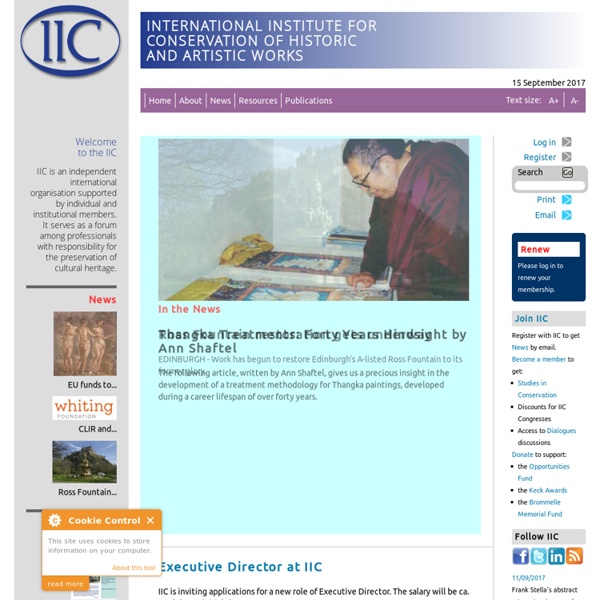 Why I hate History ( the reasons and their reasons). | Teenage Tantrums Posted on November 8, 2005. Filed under: Teen life | I know that none of you want to listen to adoloscent agonising but I’m really stressed and depressed. No matter how hard I study , I always screw up my History , Civics and Geography. I am the Emperor of English , the Master of Maths and the Superboy of Science but Social Studies is way beyond my comprehension. It SUCKS man. The history of man’s evolution , the creation of the Universe , stars , the Solar System etc. is interesting. Like this: Like Loading... Make a Comment

The Little-Known Story of the Night Witches, an All-Female Force in WWII In the Nazi-occupied Soviet Union, German soldiers had a very real fear of witches. Namely, the “Night Witches,” an all-female squadron of bomber pilots who ran thousands of daring bombing raids with little more than wooden planes and the cover of night—and should be as celebrated as their male counterparts. This month marks the 73rd anniversary of the start of their pioneering service. In June of 1941, the Axis powers pushed into the Soviet Union using the largest invading force in the history of warfare. The infamous Operation Barbarossa saw about four million troops wade into Russia from the west, establishing a line that threatened to overtake Moscow itself. The offensive was one of the most violent and terrible military actions in World War II, with countless atrocities committed against the Russian people. In October of 1941 the order came down from Joseph Stalin that Raskova was to establish a trio of all-female air squads. In partnership with Atlas Obscura.

Research : Conservation As a public institution, one of the Museum's primary obligations is the preservation of the collections for future generations. The Conservation Department is entrusted with this responsibility and is committed to the preservation of this irreplaceable cultural legacy. The conservators dedicate their time to the examination and treatment of works of art, materials research, education, and preservation activities throughout the Museum. Augustus Saint-Gaudens’s Diana has adorned the top of the Museum’s Great Stair Hall for more than eighty years. IMLS- National Leadership Grant to the Conservation Department, Philadelphia Museum of Art: Federally compliant protective clear coatings for metals - October 1, 2008 – September 30, 2011 In 2011, the Museum’s Furniture and Woodwork conservators made an exciting discovery at Mount Pleasant. The examination and conservation treatment of a group of important handheld firearms was recently made possible with generous funding from the Samuel H.

The History of Ancient Nubia | The Oriental Institute of the University of Chicago Nubia was home to some of Africa’s earliest kingdoms. Known for rich deposits of gold, Nubia was also the gateway through which luxury products like incense, ivory, and ebony traveled from their source in sub-Saharan Africa to the civilizations of Egypt and the Mediterranean. Archers of exceptional skill provided the military strength for Nubian rulers. Kings of Nubia ultimately conquered and ruled Egypt for about a century. Monuments still stand—in modern Egypt and Sudan—at the sites where Nubian rulers built cities, temples, and royal pyramids. Nubians lived in the central Nile valley African people from what is now the Sahara began to move toward the Nile in Nubia by around 5000 BC. The river was a lifeline Many Nubians lived along the Nile which curved northward through the desert. Archaeology and history reveal Nubia Most information about ancient Nubia comes from archaeological excavation and from the study of monuments and rock art found there. The origin of the name Nubia is obscure.

Section française de l'Institut international de conservation (SFIIC) The Roaring Twenties Prohibition was not the only source of social tension during the 1920s. The Great Migration of African Americans from the Southern countryside to Northern cities and the increasing visibility of black culture—jazz and blues music, for example, and the literary movement known as the Harlem Renaissance—discomfited some white Americans. Millions of people in places like Indiana and Illinois joined the Ku Klux Klan in the 1920s. Likewise, an anti-Communist “Red Scare” in 1919 and 1920 encouraged a widespread nativist, or anti-immigrant, hysteria. These conflicts–what one historian has called a “cultural Civil War” between city-dwellers and small-town residents, Protestants and Catholics, blacks and whites, “New Women” and advocates of old-fashioned family values–are perhaps the most important part of the story of the Roaring Twenties. Access hundreds of hours of historical video, commercial free, with HISTORY Vault.

Stanislav Petrov: The man who may have saved the world Media playback is unsupported on your device Thirty years ago, on 26 September 1983, the world was saved from potential nuclear disaster. In the early hours of the morning, the Soviet Union's early-warning systems detected an incoming missile strike from the United States. Computer readouts suggested several missiles had been launched. The protocol for the Soviet military would have been to retaliate with a nuclear attack of its own. But duty officer Stanislav Petrov - whose job it was to register apparent enemy missile launches - decided not to report them to his superiors, and instead dismissed them as a false alarm. This was a breach of his instructions, a dereliction of duty. But his decision may have saved the world. "I had all the data [to suggest there was an ongoing missile attack]. 'Couldn't move' His job was to register any missile strikes and to report them to the Soviet military and political leadership. And yet, when the moment came, he says he almost froze in place.

OCIM - Office de Coopération et d'Information Muséales Animated interactive of the history of the Atlantic slave trade. Source: slavevoyages.org For the full interactive version, use a larger device. Interactive by Andrew Kahn. Background image by Tim Jones. Usually, when we say “American slavery” or the “American slave trade,” we mean the American colonies or, later, the United States. This interactive, designed and built by Slate’s Andrew Kahn, gives you a sense of the scale of the trans-Atlantic slave trade across time, as well as the flow of transport and eventual destinations. History of American Slavery, Ep 2: The Atlantic slave trade during its heyday and the remarkable life of Olaudah Equiano. There are a few trends worth noting. In the 1700s, however, Spanish transport diminishes and is replaced (and exceeded) by British, French, Dutch, and—by the end of the century—American activity. In the final decades of the trans-Atlantic slave trade, Portugal reclaims its status as the leading slavers, sending 1.3 million people to the Western Hemisphere, and mostly to Brazil.