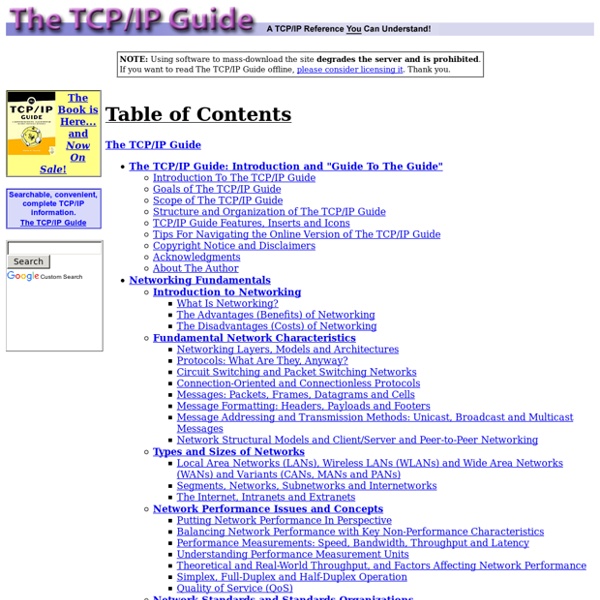 I know everyone hates ads. But please understand that I am providing premium content for free that takes hundreds of hours of time to research and write. I don't want to go to a pay-only model like some sites, but when more and more people block ads, I end up working for free. If you like The TCP/IP Guide, please consider the download version. If you want to use this site for free, I'd be grateful if you could add the site to the whitelist for Adblock. Thanks for your understanding! Sincerely, Charles Kozierok Author and Publisher, The TCP/IP Guide Related:  Infrastructure and Facilities Planning

Running a VSAN PoC – Customer reactions – vNinja.net I recently set up a VMware Virtual SAN 6.1 Proof-of-Concept for a customer, configuring a 3-node cluster based on the following setup: Hardware: HP ProLiant DL380 G92 x Intel Xeon E5-2680 @ 2.50Ghz w/12 Cores392 GB RAM1 x Intel DC 3700 800GB NVMe6 x Intel DC S3610 1.6TB SSDHP FlexFabric 556FLR-SFP+ 10GBe NICs Virtual SAN Setup: Since this was a simple PoC setup, the VSAN was configured with 1 disk group pr host with all 6 Intel DC S3610 drives used as the capacity layer, and the Intel DC P3700 NVMe cards set up as the cache. This gives a total of 21.61TB of usable space for VSAN across the cluster. vMotion and VSAN traffic were set up to run on a separate VLANs over 2 x 10GBe interfaces, connected to a Cisco backend. Customer reaction: After the customer had been running it in test for a couple of weeks, I got a single line email from them simply stating: “WOW! They were so impressed with the performance (Those NVMe cards are FAST!) Like this: Like Loading...

Types of Network Protocols What is a Network Protocol A protocol is a set of rules that govern the communications between computers on a network. These rules include guidelines that regulate the following characteristics of a network: access method, allowed physical topologies, types of cabling, and speed of data transfer. Types of Network Protocols The most common network protocols are: Ethernet Local Talk Token Ring FDDI ATM The followings are some commonly used network symbols to draw different kinds of network protocols. Ethernet The Ethernet protocol is by far the most widely used one. The Ethernet protocol allows for linear bus, star, or tree topologies. Fast Ethernet To allow for an increased speed of transmission, the Ethernet protocol has developed a new standard that supports 100 Mbps. Local Talk Local Talk is a network protocol that was developed by Apple Computer, Inc. for Macintosh computers. The Local Talk protocol allows for linear bus, star, or tree topologies using twisted pair cable. Token Ring

Packet Tracer: Startup guide for absolute beginners. - Kanishkas howto? There are a few tuts available for Packet tracer on internet but I have made this guide keeping absolute beginners in mind and when I say absolute beginners, I mean really absolute beginners. In this guide we are going to create a star topology and see the difference between hub and a switch. To those people who don’t know what Packet Tracer is, it is a software developed by Cisco that can simulate networks and can be really helpful for people preparing for CCNA. See How to install Packet Tracer on Windows and Linux. So Let’s start our tutorial. Click on Hubs. Click on the hub we just placed in our workspace. Click on the Config tab just beside the Physical tab. Now we are going to place five computers around the hub to form Hub and Spoke topology. Click on any PC. Click on the Config tab beside Physical tab. Perform this action for other PC’s also and name them differently. Click on Server. Click on DHCP. Click on the interface FastEthernet to the left. Do the same for all connections.

Communications protocol In telecommunications, a communications protocol is a system of digital rules for data exchange within or between computers. In computer science, when data is exchanged through a computer network, the rules system is called a network protocol. Communicating systems use well-defined formats for exchanging messages. Each message has an exact meaning intended to provoke a particular response of the receiver. Communicating systems[edit] In digital computing systems, the rules can be expressed by algorithms and data structures. Operating systems usually consist of a set of cooperating processes that manipulate shared data to communicate with each other. In contrast, because there is no common memory, communicating systems have to communicate with each other using a shared transmission medium. To implement a networking protocol, the protocol software modules are interfaced with a framework implemented on the machine's operating system. Basic requirements of protocols[edit] Protocol design[edit]

Emoji Ideograms or smileys used in electronic messages and webpages An emoji, created by the Noto project Emoji (Japanese: , ; Japanese: [emodʑi]; singular emoji, plural emoji or emojis[1]) are ideograms and smileys used in electronic messages and web pages. Emoji exist in various genres, including facial expressions, common objects, places and types of weather, and animals. They are much like emoticons, but emoji are actual pictures instead of typographics.[2] Originally meaning pictograph, the word emoji comes from Japanese e (絵, "picture") + moji (文字, "character"); the resemblance to the English words emotion and emoticon is purely coincidental.[3] The ISO 15924 script code for emoji is Zsye. History The origin of Emoji pictograms The emoji was predated by the emoticon,[13] a basic text-based version of the now established Unicode emoji language and likely took inspiration from pictograms. Numerous claims have been made to who invented the first emoji. The modern emoji Cultural influence Joining

IP Address Lookup IP Lookup If you can find out the IP address of an Internet user, you can get an idea what part of the country or world they're in by using our IP Lookup tool. What to do: Enter the IP address you're curious about in the box below, then click "Look Up IP Address." Read the information below for an explanation. You can't always get what you want. Your IP-address search will give you general details only about what is on the end of that IP address. The ISP and organization's name The IP's host name The country it's in The region/state The city (a best guess) The latitude and longitude of the location (a best guess) The area code for that region Any known services running on that IP What you won't get. You won't get anything like a person's name or street address. How accurate is the IP Lookup tool? In other countries the accuracy for 25-mile radius within the region is 55%. Related Articles

Storm Control | Community String I remember when I first saw Storm Control in a config and thought “woah, whats that looks really confusing”, but really its pretty simple stuff. We use storm control to rate limit layer 2 traffic, this helps us prevent a subnet from being flooded with broadcasts, multicasts which would adversely affect the performance of the entire subnet. Storm Control can only be configured on physical interfaces and will not work on subinterfaces, or an LACP/PAGP interface. Configuration The first command shown limits the broadcast to 200pps, and if this limit is reached will not forward any more broadcasts until this is reduced to 150pps (config-if)#storm-control broadcast level pps 200 150 In the final example unicast is limited to 80% of the interface bandwidth but a second value is not specified, this causes all unicast to be forwarded up to 80% of the bandwidth and it does not force the traffic to wait until it drops below a second level (config-if)#storm-control unicast level 80

Internet protocol suite The Internet protocol suite is the computer networking model and set of communications protocols used on the Internet and similar computer networks. It is commonly known as TCP/IP, because its most important protocols, the Transmission Control Protocol (TCP) and the Internet Protocol (IP), were the first networking protocols defined in this standard. Often also called the Internet model, it was originally also known as the DoD model, because the development of the networking model was funded by DARPA, an agency of the United States Department of Defense. TCP/IP provides end-to-end connectivity specifying how data should be packetized, addressed, transmitted, routed and received at the destination. The TCP/IP model and related protocol models are maintained by the Internet Engineering Task Force (IETF). History[edit] Early research[edit] Diagram of the first internetworked connection Specification[edit] Adoption[edit] Key architectural principles[edit] Abstraction layers[edit] Link layer[edit]