Degree of Freedom - The One Year BA 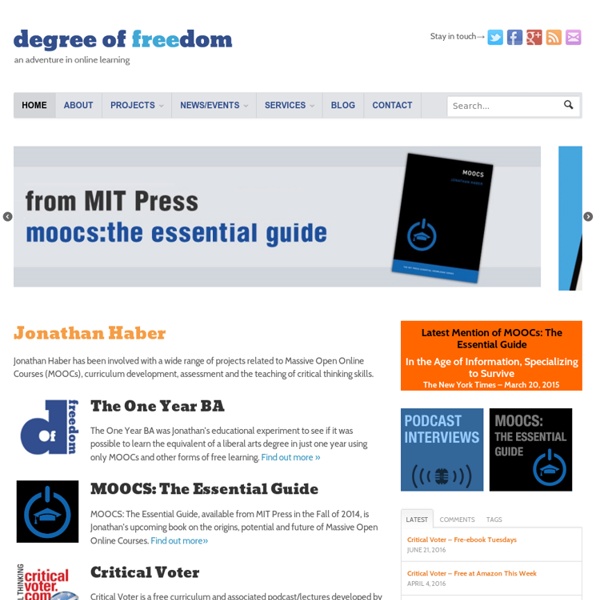 Harvard hates you (and Coursera isn’t all that fond of you either). Anybody familiar with my fondness for labor history, 19th century American folklore and sarcasm will understand why this is now my favorite tweet ever: If you don’t know who “John Henry” was, The Boss will be delighted to sing you one version of the story. Or better yet, read the book by Scott Reynolds Nelson and learn a little bit about all of them. The key point here for understanding that tweet is that the steam hammer killed John Henry, leaving him no time to do other things at all. While MOOC enthusiasts like to claim that their babies will allow professors to get back to the way teaching is supposed to be, anybody who’s paying the least bit of attention to academic politics in this day and age knows that the bean counters will never let that happen. My response to that tweet was so pathetic in its attempt at similar humor that I just deleted it before writing this. You think I’m kidding? As I mentioned before , I know Bill Bowen (even though I haven’t seen him in many years).

Is College Moving Online? Gregory Nagy, a professor of classical Greek literature at Harvard, is a gentle academic of the sort who, asked about the future, will begin speaking of Homer and the battles of the distant past. At seventy, he has owlish eyes, a flared Hungarian nose, and a tendency to gesture broadly with the flat palms of his hands. He wears the crisp white shirts and dark blazers that have replaced tweed as the raiment of the academic caste. His hair, also white, often looks manhandled by the Boston wind. Where some scholars are gnomic in style, Nagy piles his sentences high with thin-sliced exposition. Nagy has published no best-sellers. This spring, however, enrollment in Nagy’s course exceeds thirty-one thousand. Many people think that MOOC s are the future of higher education in America. Some lawmakers, meanwhile, see MOOC s as a solution to overcrowding; in California, a senate bill, introduced this winter, would require the state’s public colleges to give credit for approved online courses.

Users grade free online courses Many educators haven’t figured out what to make of free online classes for the masses, but Silicon Valley developers and students are starting to. At least three sites have started in recent months to let users of massive open online courses review the MOOCs they’ve taken. The idea isn't new, of course. Rate My Professors has allowed anonymous reviews of professors for years, frequently to the ire of faculty. Emerson Malca, the 25-year-old founder of Grade My Course, calls his site “Yelp for education.” That leads to kinder, more constructive comments, he said. Jesse Spaulding, who started Course Talk, sees a similar pattern in the reviews on his site. Spaulding also thinks some professors suggest students visit his site. To counter that, Spaulding said he tries to highlight users -- not all of them anonymous -- who have written multiple reviews or who have written reviews other users feel are fair. So far, though, there are not many MOOCs with poor ratings.

Free Online Classes: Unlocking the Ivory Tower If you haven't heard of MOOCs yet, you will. In fact, if you haven't already taken a MOOC, seriously, what's wrong with you? MOOCs are taking the educational world by storm: The New York Times has already proclaimed 2012 the "Year of the MOOC"; Columbia University will offer its first MOOCs this spring, while the University of Virginia fired its president (temporarily, it turned out) for foot-dragging on MOOCs. Blogs and educational journals are awash with debates over whether MOOCs are the future, are overhyped, will save higher education or destroy it. For the uninitiated, MOOCs are Massive Open Online Courses, and they are simple enough to envision, if a bit unsettling for those whose notion of college coursework invariably involves desks, whiteboards, and the physical presence of other living human beings. Courses in which students and professors never meet face to face aren't new, of course. Krishna Chavda Courtesy Coursera Details Related Stories More About

The Professors’ Big Stage You may think this MOOCs revolution is hyped, but my driver in Boston disagrees. You see, I was picked up at Logan Airport by my old friend Michael Sandel, who teaches the famous Socratic, 1,000-student “Justice” course at Harvard, which is launching March 12 as the first humanities offering on the M.I.T.-Harvard edX online learning platform. “Where did you get those?” Sandel had just lectured in Seoul in an outdoor amphitheater to 14,000 people, with audience participation. O.K., not every professor will develop a global following, but the MOOCs revolution, which will go through many growing pains, is here and is real. ¶Institutions of higher learning must move, as the historian Walter Russell Mead puts it, from a model of “time served” to a model of “stuff learned.” ¶We demand that plumbers and kindergarten teachers be certified to do what they do, but there is no requirement that college professors know how to teach.