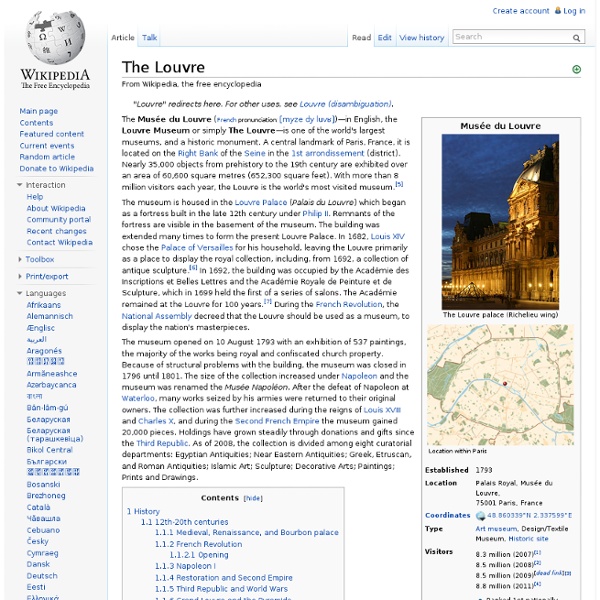 The Louvre or Louvre Museum (French: Musée du Louvre, pronounced: [myze dy luvʁ]) is one of the world's largest museums and a historic monument. A central landmark of Paris, France, it is located on the Right Bank of the Seine in the 1st arrondissement (district). Nearly 35,000 objects from prehistory to the 21st century are exhibited over an area of 60,600 square metres (652,300 square feet). With more than 9.7 million visitors each year, the Louvre is the world's most visited museum.[6] The museum is housed in the Louvre Palace, originally built as a fortress in the late 12th century under Philip II. Remnants of the fortress are visible in the basement of the museum. The museum opened on 10 August 1793 with an exhibition of 537 paintings, the majority of the works being royal and confiscated church property. History[edit] 12th-20th centuries[edit] Medieval, Renaissance, and Bourbon palace[edit] The only portion of the medieval Louvre still visible[9] French Revolution[edit] Opening[edit]

Related:  Wikipedia B • Travel B

St. Bartholomew's Day massacre The St. Bartholomew's Day massacre (Massacre de la Saint-Barthélemy in French) in 1572 was a targeted group of assassinations, followed by a wave of Roman Catholic mob violence, both directed against the Huguenots (French Calvinist Protestants), during the French Wars of Religion. Traditionally believed to have been instigated by Catherine de' Medici, the mother of King Charles IX, the massacre took place five days after the wedding of the king's sister Margaret to the Protestant Henry III of Navarre (the future Henry IV of France). This marriage was an occasion for which many of the most wealthy and prominent Huguenots had gathered in largely Catholic Paris.

Visiting Paris on a Budget: Tips and Tricks Paris can be an incredibly expensive city-- it is, after all, a world center for luxury goods, gourmet restaurants, opulent palace hotels and the like. As a result, you may (logically) assume that seeing Paris on a budget isn't realistic, or would amount to a miserable, pauper-like experience. Luckily, a visit to Paris doesn't have to break the bank. It's entirely possible to eat well, find clean and decent accommodations, and enjoy discounted and free attractions while still having the sense that you're living it up in one of the world's most gorgeous cities. A (fun) budget Paris vacation doesn't have to belong to the realm of fairy tales, after all: read on to find out why.

Galileo Galilei Galileo Galilei (Italian pronunciation: [ɡaliˈlɛːo ɡaliˈlɛi]; 15 February 1564[3] – 8 January 1642), often known mononymously as Galileo, was an Italian physicist, mathematician, engineer, astronomer, and philosopher who played a major role in the scientific revolution during the Renaissance. His achievements include improvements to the telescope and consequent astronomical observations and support for Copernicanism. Galileo has been called the "father of modern observational astronomy",[4] the "father of modern physics",[5][6] the "father of science",[6][7] and "the father of modern science".[8] Early life Huguenot The Huguenots (/ˈhjuːɡənɒt/ or /huːɡəˈnoʊ/; French: [yɡno], [yɡəno]) were members of the Protestant Reformed Church of France during the 16th and 17th centuries. French Protestants were inspired by the writings of John Calvin in the 1530s, and they were called Huguenots by the 16th century. By the end of the 17th century and into the 18th century, roughly 500,000 Huguenots had fled France during a series of religious persecutions. They relocated to Protestant nations, such as England, Wales, Scotland, Denmark, Sweden, Switzerland, the Dutch Republic, the Electorate of Brandenburg, Electorate of the Palatinate (both in the Holy Roman Empire), the Duchy of Prussia, the Channel Islands and also to Cape Colony in South Africa and several of the English colonies of North America which were willing to accept them. Etymology[edit] A term used originally in derision, Huguenot has indefinite origins.

List of parks and gardens in Paris List of parks and gardens in Paris From Wikipedia, the free encyclopedia Jump to: navigation, search The following is a list of parks and gardens in Paris, France: Johannes Kepler Johannes Kepler (German: [ˈkʰɛplɐ]; December 27, 1571 – November 15, 1630) was a German mathematician, astronomer, and astrologer. A key figure in the 17th century scientific revolution, he is best known for his laws of planetary motion, based on his works Astronomia nova, Harmonices Mundi, and Epitome of Copernican Astronomy. These works also provided one of the foundations for Isaac Newton's theory of universal gravitation. During his career, Kepler was a mathematics teacher at a seminary school in Graz, Austria, where he became an associate of Prince Hans Ulrich von Eggenberg. Later he became an assistant to astronomer Tycho Brahe, and eventually the imperial mathematician to Emperor Rudolf II and his two successors Matthias and Ferdinand II.

French Wars of Religion The exact number of wars and their respective dates are the subject of continued debate by historians; some assert that the Edict of Nantes in 1598 concluded the wars, although a resurgence of rebellious activity following this leads some to believe the Peace of Alais in 1629 is the actual conclusion. However, the Massacre of Vassy in 1562 is agreed to begin the Wars of Religion and the Edict of Nantes at least ended this series of conflicts. During this time, complex diplomatic negotiations and agreements of peace were followed by renewed conflict and power struggles. At the conclusion of the conflict in 1598, Huguenots were granted substantial rights and freedoms by the Edict of Nantes, though it did not end hostility towards them.

10 of the best bistros in Paris Josephine "Chez Dumonet" For a delicious sepia-toned experience of pre-war Paris, this beautiful art-nouveau bistro on a chic street in Saint Germain is worth the wound to your wallet. The fact is that old-fashioned bistro cooking in Paris has become almost as expensive as it is rare – thank France's 35-hour working week for making slow cooking so pricey. But if you're craving old-school dishes like morel mushrooms stuffed with foie gras, truffles and country ham; millefeuille of boned pigeon; and bœuf bourguignon, you won't do better than this 1880 vintage dining room. Note that many dishes are served in half portions, the boeuf bourguignon is so ample it feeds two, and the reasonably priced house Bordeaux is what all the regulars drink. • 117 rue du Cherche Midi, 6th, +33 1 4548 5240.