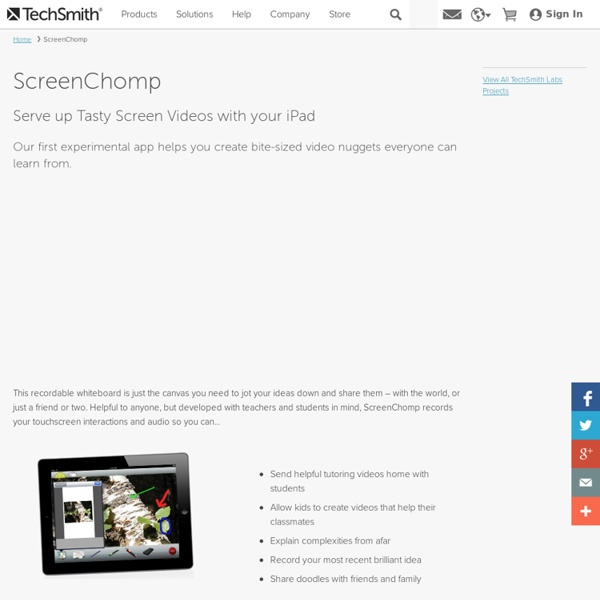 Serve up Tasty Screen Videos with your iPad Our first experimental app helps you create bite-sized video nuggets everyone can learn from. This recordable whiteboard is just the canvas you need to jot your ideas down and share them – with the world, or just a friend or two. Helpful to anyone, but developed with teachers and students in mind, ScreenChomp records your touchscreen interactions and audio so you can… Send helpful tutoring videos home with students Allow kids to create videos that help their classmates Explain complexities from afar Record your most recent brilliant idea Share doodles with friends and family A whiteboard with many colored markers, a wide-open Canvas, and easy sharing through ScreenChomp.com or Facebook make it as easy as Record. Press for 3 seconds to clean your whiteboard. Import any image from your iPad's camera roll to doodle on. Use these colored markers to sketch, or hold for 3 seconds for more colors. Swipe over any mistakes to watch them disappear.

The iPad Effect: A Top-10 List » Third Graders, Dreaming Big It’s only been a few months, but I’ve already noticed some drastic changes in our classroom when the iPads roll in…. I’ve labeled these Top-10 phenomena as being The iPad Effect, as they seem to occur every Tuesday and Thursday…. 1. Fewer Water Bubbler Visits Days when there are no iPads in the classroom, students seem to ask to leave to hydrate at the bubbler far more often than they do when the iPads ARE in the classroom. 34 Smart Ideas For Using Smartphones In The Classroom 34 Ways Ideas For Smartphones In The Classroom By Category by John Hardison first appeared on gettingsmart.com In continuation of last week’s article, Part 1: 44 Better Ways to Use Smartphones in Class, here is a new list of thirty-six additional ideas to help leverage the power of these tech gadgets in the learning environment. In this blog post, I have attempted to avoid any redundancies. Please join me in helping educators everywhere creatively use smartphones by contributing any overlooked uses and supportive responses via this survey. 34 Smart Ideas For Using Smartphones In The Classroom To Collaborate

Once Upon a Time … An Overview of the Children’s Book App Market – Guest Post by Julie Brannon This post originally appeared in the December 2011 edition of The Social Media Monthly. Author Julie Brannon is a marketing specialist with a focus on book apps. Readers of online newspapers are accustomed to finding interactive media interspersed with their daily reading which can now include videos, interactive graphs, social feedback and other enhancements. Publishers of digital books are beginning to experiment with mixing various media into their books as well. Best Apps for Teaching & Learning 2013 Science 360 by the National Science Foundation Level: ALL (grades K-12)Platform: iOS Website

Why App Smash? Inspired by the last #1to1iPadChat , I thought it was time to post on the world craze that is App Smashing. The term App Smash was coined by the great Greg Kulowiec (@gregkulowiec) from EdTech Teacher fame. It is a hot topic in EdTech and obviously has its own Hashtag – #AppSmash. Note-Taking with iPads I vividly remember how I first learned to take notes. My sixth grade geography teacher lectured in outline style: "Roman Numeral one - China. A - Qin Dynasty. 1 - Rulers . . . " We wrote down precisely what he said, and to this day, I still take notes in outline form. However, consider Sunni Brown's TED Talk, "Doodlers Unite."

The 55 Best Free Education Apps For iPad Finding apps isn’t difficult. Finding education apps is only a bit more challenging. Finding free education apps is also possible. Myscript: An incredibly fun calculator app Yes, I just said that in the title. I am very obviously well into my 30s now that I would even consider saying that a calculator is fun but I just can't help it. A few days ago, one of my students, after going through the usual ritual of being told off for not bringing his calculator to a Physics lesson, asked if he could use the calculator on his iphone. Assuming that he would use the iphone for non-learning related means, I lingered nearby. I soon noticed that he appeared to be drawing on the screen and I pounced in, ready to give him a good telling off mid-way through his status update or non-school related use of free tech that us grown ups have yet to discover. Myscript lets you do calculations by writing the numbers with your hand.