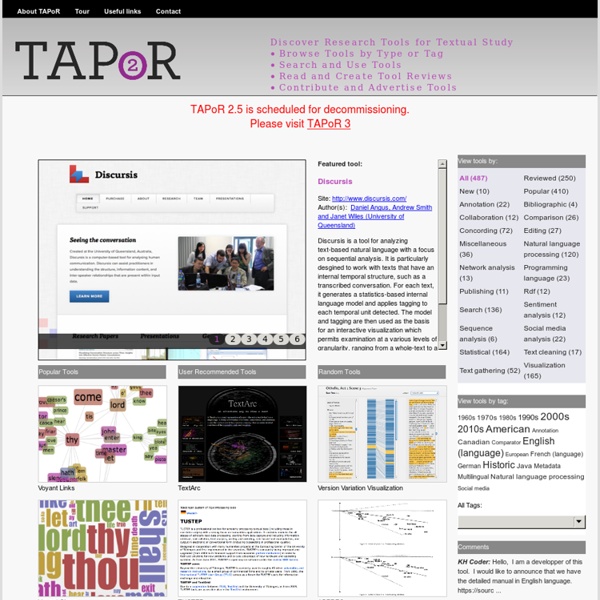 Heart Maps: Helping Students Create Craft Authentic Writing Heart Maps: Helping Students Create and Craft Authentic WritingBy Georgia Heard (Heinemann, 2016 – Learn more) Reviewed by Linda Biondi Fill your paper with the breathings of your heart. William Wordsworth On the FIRST page of my FIRST Writers Notebook (one of many), I drew my FIRST heart map. Resources These are some representative external resources. The list includes tools that complement Graphviz, such as graph generators, postprocessors and interactive viewers. It also includes higher level systems and web sites that rely on Graphviz as a visualization service. You can also find Graphviz-related projects in Google Code. Please send us suggestions for additions to this list with, if possible, a recommendation as to appropriate category for the resource. Graphical Interfaces

The Calendar & the Cloister: Oxford - St. John's College MS 17 Site Map and Navigation Enlarge Image Help R Programming for Data Science / Roger D. Peng Data science has taken the world by storm. Every field of study and area of business has been affected as people increasingly realize the value of the incredible quantities of data being generated. But to extract value from those data, one needs to be trained in the proper data science skills. The R programming language has become the de facto programming language for data science. Its flexibility, power, sophistication, and expressiveness have made it an invaluable tool for data scientists around the world. About DHCommons, an initiative of centerNet, is an online hub focused on matching digital humanities projects seeking assistance with scholars interested in project collaboration. This hub responds to a pressing and demonstrable need for a project-collaborator matching service that will allow scholars interested in DH to enter the field by joining an existing project as well as make existing projects more sustainable by drawing in new, well-matched participants. Additionally, DHCommons helps break down the siloization of an emerging field by connecting collaborators across institutions, a particularly acute need for solo practitioners and those without access to a digital humanities center.

Medieval and Modern Manuscripts in the Digital Age (MMSDA) We are very pleased to announce the fifth year of this course, now expanded and funded by the Digital Scholarly Editions Initial Training Network (DiXiT), and run by DiXiT in collaboration with the Institute of English Studies (London), King’s College London, the University of Cambridge, and the Warburg Institute. For the first time, the course will run in two parallel strands: one on medieval and the other on modern manuscripts. The course is an intensive training programme on the analysis, description and editing of manuscripts to be held jointly in Cambridge and London. It stresses the practical application of theoretical principles and gives participants both a solid theoretical foundation and also 'hands-on' experience in the cataloguing and editing of original medieval and modern manuscripts in both print and digital formats.

Chartist - Simple responsive charts You may think that this is just yet an other charting library. But Chartist.js is the product of a community that was disappointed about the abilities provided by other charting libraries. Of course there are hundreds of other great charting libraries but after using them there were always tweaks you would have wished for that were not included. Digital editions of medieval texts: Opportunities and challenges I gave a CAMPS Lab on 23 September 2011 with the title above. I’ve been involved in producing websites and multimedia now since 1997, when I started working as a copy-editor on Microsoft’s Encarta Encyclopedia (in the days when the online Brittanica was our biggest rival, and well before Wikipedia was heard of). I afterwards worked as web project manager, and since then, during my graduate student days and beyond, I’ve been involved in a number of academic digital projects.

Health Data Correlation mirador Mirador is a tool for visual exploration of complex datasets. It enables users to discover correlation patterns and derive new hypotheses from the data. Download 1.3 (8 December 2014) Opciones de código abierto para la educación by Mark Johnson on 13 January 2013, last updated Introduction This document presents options for open source software for use in the education sector. Some of these may have uses outside of education, but they are presented here in the context of their specific benefits to educational establishments, or their use in the course of teaching and learning. The document is intended to complement the UK Cabinet Office’s Open Source Options document, which is presented as part of its Open Source Procurement Toolkit in recognition that open source software is underused across the public sector.