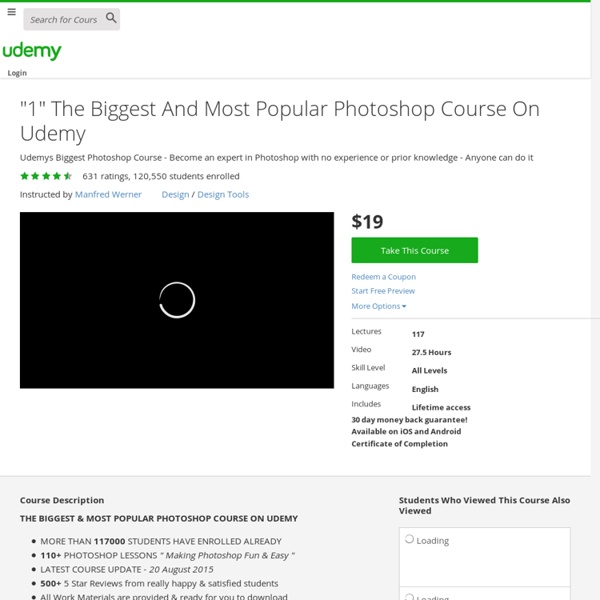 MORE THAN 117000 STUDENTS HAVE ENROLLED ALREADY 110+ PHOTOSHOP LESSONS " Making Photoshop Fun & Easy " LATEST COURSE UPDATE - 20 August 2015 500+ 5 Star Reviews from really happy & satisfied studentsAll Work Materials are provided & ready for you to download No Prior Photoshop knowledge needed "Guaranteed" Full lifetime access to the complete course All future & additional lectures will always be free of charge No illustrator, plugins or other software is needed "You only need Photoshop" --------------------------- " Then this course is for you " ------------------------------- What This Course Entails: I will teach you how to get into photoshop, so don't worry if you don't have prior experience with photoshop or other plugins. Follow my lead and I'll teach you to be good at it! “Seriously" All my photoshop instructions form part of a comprehensive guide that can help you to accomplish your goals by applying these skills. The idea is to make photoshop fun and easy! You'll learn

Making Selections With The Pen Tool In Photoshop Written by Steve Patterson. When it comes to making selections in Photoshop, there's really two types of people - those who know how to use the Pen Tool, and those who struggle. Most people put off learning how to use the Pen Tool for as long as possible, while others never get around to learning it, believing it's just too confusing, too complicated, and just plain unnatural. Ultimately, their work in Photoshop suffers for it, since they're stuck relying on the Lasso Tool for just about everything they can't select with the Rectangular or Elliptical Marquee Tools. In this Adobe Photoshop tutorial, we're going to put an end to the suffering.

Unlock The Full Power Of Basic Selections In Photoshop Written by Steve Patterson. In this Photoshop tutorial, we’re going to look at how to get the most out of Photoshop’s basic selection tools, such as the Marquee tools or the Lasso tool. If all you’ve been using them for is to make a new selection every time, you’ve been missing out on their full potential. We’re going to see how you can add to an existing selection, how to subtract an area from an existing selection, and even how to intersect two selections and grab the area that overlaps. Once you become familiar with the full power of basic selections, they’ll seem a whole lot more useful to you. Let’s start by taking a look at how to add to an existing selection. High Speed Motion Trail Effect Written by Steve Patterson. In this Photo Effects tutorial, we’ll learn how to add a sense of speed to an object using an easy to create motion blur effect! This "speed trail" effect is very popular in sports photography since it’s a great way to add motion, direction and excitement to an image, creating the illusion that an athlete, for example, is blazing past the competition at super human speed. Of course, this effect works just as well with a photo of your kids running in the backyard, or people dancing at a party, or any image where the subject should appear to be moving. I’ll be working with Photoshop CS4 for this tutorial, but you can create this effect with any version of Photoshop.

concept DIAGRAM conceptARCHITECT | conceptMODEL | conceptSKETCH | conceptLANDSCAPE | conceptURBANIZATION | modeINTERIEUR | patternSTYLE | parametricWORLD find us on TWITTER and FACEBOOK by PLP Architecture source slovarchzine: DomT House, Stara Lubovna, Slovakia / Martin Boles Architectsource 56 Absolutely Brilliant and Intriguing Photoshop Video Tutorials We see a lot of Photoshop tutorials on the net, but most of what we come across are tutorials written in a step-by-step manner. In most cases, the instructions are clear-cut and easy to follow, but few would argue against an even more effective kind of tutorial: Video tutorials. With the emergence of video sharing websites such as Youtube and Metacafe over the recent years, we see an ever-increasing number of user-generated videos from all over the net. Some of these videos came from avid Photoshop fans sharing their tips, while others originates from websites dedicated to Photoshop techniques sharing their video tutorials on a regular basis. These videos give the most direct demonstration of how to achieve certain image effects via Adobe Photoshop.

9 Great blogs that regularly publish Photoshop tutorials By Jobey Buya - Thursday, June 19, 2014 - No Comments Its always great to see incredible Photoshop tutorials and learn something new everytime while following one, Here's 9 great Blogs that makes regularly cool tutorials with valuable Photoshop tips . Share This: Like1Tweet0+2Pin it0 I'm Jobey. an alien who decided to go as a human in EARTH. Hope you find this blog a bit usefull for some of your design resources, Make sure to always check in and share.

Visualizing Architecture One of the very first tutorials I created for this site described a workflow that generated a night scene only using Photoshop. That tutorial used a very simple base image exported right out of Sketchup. The workflow is easy to implement and is especially useful if you are not comfortable setting up night scenes and lighting in an external render engine such as Kerkythea or V-Ray. However, that same workflow is equally useful with more complex and developed scenes and this latest post is my attempt prove it. As I was working on the previous post, I realized the daytime scene could easily be shifted into a night scene to generate a more compelling image.

Understanding Actions in Photoshop - LensVid.comLensVid.com On this video photographer Nino Batista goes back to Photoshop basics and looks at everything you need to know about using actions in Photoshop. Actions are simply a set of functions or operations that a user can record and use later on automatically with one click of a bottom in Photoshop (you can also have actions in windows or MAC and many other programs – but that is a matter for another lesson). An action can be simple – like reduce opacity and increase contrast or can be very complex involving many changes to you image with a single click of the mouse. The Ultimate Collection of Free Physics Videos In Brief Black holes, quantum entanglement, and worlds with 11 dimensions - get to know the amazing physics that governs our universe. You don’t need to pay hundreds of thousands of dollars or sit through hours of classes in order to understand the fundamental nature of the universe. In truth, the fabric of the cosmos is just a mouse click away.

Free Engraved Illustration Effect Action for Photoshop My most popular tutorial of 2014 was my guide to creating a realistic money effect in Photoshop, which explained the steps to achieve an authentic engraved illustration style. The process is quite time consuming, so I figured it would be useful to follow it up with a ready made Photoshop Action that produces the effect automatically with just the click of a button. Choose from 3 levels of detail for your image, then the Action will transform your photo into a realistic engraved illustration.

41 Nicest Photoshop Photo Effects [Photoshop Tutorials] - Hongkiat Looking at how powerful Photoshop can be in terms of photo editing, it’s probably not important if you suck at taking photographs or being labeled an amateur photographer. As long as you picked up a couple of Photoshop photo editing skills, it will still impress those who sees it. So the next time you want to publish some photos online, consider editing them so they look more impressive. Here’s a compilation of 41 Nicest Photoshop Photo Effects you can take into reference. Full content after jump. Mental Wave Explosion EffectHow to create a crazy explosion, like a mix of Magneto’s ability with Peter Petrelli’s power.

Cast Shadow in Photoshop Tutorial When you combine photos together, realistic cast shadows are the trick to making it look real. In this Photoshop tutorial, Colin Smith shows you different ways to make shadows to blend people with the background environment. Scroll down to see the written tutorial and more tips and watch the 14 minute video right here. Step 1 © Photography and tutorial by Colin Smith The 72 PPI Web And Screen Resolution Myth Written by Steve Patterson. If you've been around computers and digital images for a while, especially if you're a web designer or a photographer publishing your photos online, you've no doubt heard it said that the correct resolution for images displayed on the web, or on computer screens in general, is 72 pixels per inch (ppi). You may have even heard it said that while 72 ppi is correct for images displayed on a Mac, a Windows-based PC needs the resolution set to 96 ppi.