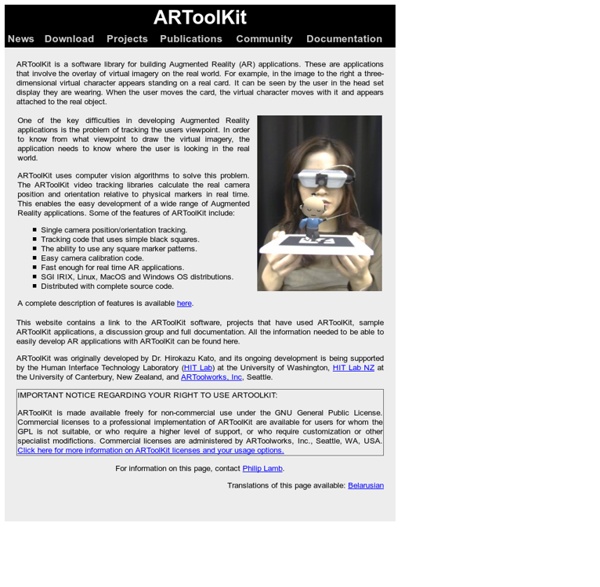 ARToolKit is a software library for building Augmented Reality (AR) applications. These are applications that involve the overlay of virtual imagery on the real world. For example, in the image to the right a three-dimensional virtual character appears standing on a real card. It can be seen by the user in the head set display they are wearing. When the user moves the card, the virtual character moves with it and appears attached to the real object. This website contains a link to the ARToolKit software, projects that have used ARToolKit, sample ARToolKit applications, a discussion group and full documentation. ARToolKit was originally developed by Dr. For information on this page, contact Philip Lamb. Translations of this page available: Belarusian

Lab Notes: Zack’s Wearable RasPi I’m Zack Freedman, part man, part Raspberry Pi! I’m writing this blog post from a wearable cyborg Raspberry Pi, or as I like to call it, Pi in the Face. When Rob Bishop of the Raspberry Pi Foundation visited the space yesterday, he challenged the attendees to build a project using the tiny open-source computer. Features Easily drag & dropengaging content With the Layar Creator, you can enhance flyers, postcards, packaging or any other item with interactive content, including video messages, Web and social links, photo slideshows, music clips and much more! Transform everyday objects into… A multimedia player

USB firmware debugging with USBTrace, PicKit & MPLAB IDE Ah, the joy of firmware debugging! I’ve been working on a USB firmware for my new upcoming product that involves a dual traditional TTL (Serial) and a USB-TO-SERIAL converter (CDC Communication Port) implemented in the same firmware. The firmware was written in C18 , using the USB stack from Microchip Applications Libraries. Everything worked well until I suddenly discovered that while sending data over the CDC port from the computer to the device, the device would *sometimes* receive garbage data instead of what I sent. This wouldn’t be so discouraging if the data received would be the same, or at least this would happen always not *sometimes*. The bug was caught in the act on the screenshot below, the arrows show the data I actually sent ‘stop’ followed by LF (0xA) char and the character codes (in decimal) actually received.

How to Find Hidden COM Ports This mini tutorial will show you how you can find and uninstall all those extra COM ports you may have registered from years of microcontroller-hacking. You may have noticed that every time a new FTDI-based board is plugged in, you get a new COM port. You might also get new COM port assignment with adapters, etc.

Augmented Book Prototype: 14 Steps (with Pictures) Use a single thread such as a waxed cotton or linen thread. Do not make a knot. To ensure you have enough thread use roughly five times the height of your book. (image 1) Take a section of your pages, to hide the thread inside, and start by using the second hole from the bottom. How I became a password cracker At the beginning of a sunny Monday morning earlier this month, I had never cracked a password. By the end of the day, I had cracked 8,000. Even though I knew password cracking was easy, I didn't know it was ridiculously easy—well, ridiculously easy once I overcame the urge to bash my laptop with a sledgehammer and finally figured out what I was doing. My journey into the Dark-ish Side began during a chat with our security editor, Dan Goodin, who remarked in an offhand fashion that cracking passwords was approaching entry-level "script kiddie stuff." This got me thinking, because—though I understand password cracking conceptually—I can't hack my way out of the proverbial paper bag. I'm the very definition of a "script kiddie," someone who needs the simplified and automated tools created by others to mount attacks that he couldn't manage if left to his own devices.

How I coded in 1985 Back in 1985 I worked on the computerization of a machine designed to stick labels on bottles. The company that made the machines was using electromechanical controls to spool labels off a reel and onto products (such as bottles of shampoo) passing by on a conveyor. The entire thing needed to work with mm accuracy because consumers don't like labels that aren't perfectly aligned. HTG Explains: What Can You Find in an Email Header? Whenever you receive an email, there is a lot more to it than meets the eye. While you typically only pay attention to the from address, subject line and body of the message, there is lots more information available “under the hood” of each email which can provide you a wealth of additional information. Why Bother Looking at an Email Header?

Projectile Motion Primer for FIRST Robotics It is that FIRST Robotics competition time of the year. Basically, in FIRST, high school students work in teams to build robots that compete in specific tasks. Apparently, this year a task involves throwing a basketball into a goal. And this leads to the popular question: how do I tell my robot to throw the ball? Open Source (Almost) Everything When Chris and I first started working on GitHub in late 2007, we split the work into two parts. Chris worked on the Rails app and I worked on Grit, the first ever Git bindings for Ruby. After six months of development, Grit had become complete enough to power GitHub during our public launch of the site and we were faced with an interesting question: Should we open source Grit or keep it proprietary?