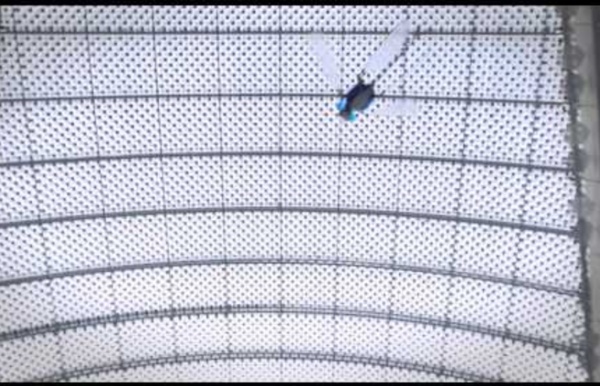 Spymaster Orcasub: The $2 million made-to-order private submarine shown as mock-up at Harrods It wasn't just £20k bling headphones to be found at the Harrods Technology 2.0 showcase, as Spymaster - best known for its security devices - had something altogether cooler and far pricier on show: a mock-up of a $2-million private submarine. Yes, you read that right. While many might describe this mini marvel as an overpriced toy, who wouldn't want to go exploring the underwater depths by themselves? It's all very James Bond... or is that more James Cameron? The 22ft-long, 4-tonne Orcasub is built to Lloyd's Register standards and the base model can descend to 1,000ft without a hitch. The battery-powered Orcasub comes with 80 hours of life support in each of its two 360-degree open-view pods, has multi-beam collision-avoidance sonar so you know what's going on around you, a digital long-range underwater communication system to keep in contact with the world above and a 60,000 lumen Nuytco NewtSun ultra-LED lighting system to light up the surrounding water.

Gaui x7 What Is Elon Musk's Hyperloop Proof That Science Is Sorcery Thought-guided helicopter takes off Researchers have harnessed the power of thought to guide a remote-control helicopter through an obstacle course. The demonstration joins a growing number of attempts to translate the electrical patterns of thoughts into motions in the virtual and real world. Applications range from assisting those with neurodegenerative disorders to novel modes of video game play. The research in the Journal of Neural Engineering uses a non-invasive "cap" to capture brain electrical activity. It is not the "mind-reading" of fiction. Those thoughts, such as that of making a fist with the left hand, are then correlated with motions of the helicopter - in this case to the left. The electroencephalograph remains a chaotic and largely indecipherable mess of electrical signals, but those related to motion - or the mere thought of it - have proven to be comparatively strong and repeatable. Even technology firms see potential in the idea; Samsung is reportedly working on a "mind-control" tablet device.

Hamilton Scotts, En-suite Sky Garage Singapore Investing in Elon Musk's Hyperloop System One year ago, arguably the most ambitious entrepreneur in the world hinted at plans of building a new method of transportation. This method of transportation would be immune to weather, would never crash, and would be twice as fast as an airplane. It would require less energy and would be cheaper than driving a car. I'm talking about Elon Musk's San Fransisco-to-Los Angeles Hyperloop system. The Future of Travel According to Musk, the Hyperloop would cost around $6 billion, which is considerably cheap considering the bullet train being proposed in California would run at around $60 billion. And while this may sound like a pipe dream, betting against Elon Musk and his ambitious projects can hardly be considered a good idea. When looking at the success of Paypal, SpaceX, and Tesla (NASDAQ: TSLA), it is difficult to deny that if Musk wants something done, he is almost certainly going to see it through. Musk announced yesterday via Twitter that he will publish the Hyperloop design by August 12.

AIREAL: Interactive Tactile Experiences in Free Air Elon Musk's 'Hyperloop' idea for San Francisco-LA link 12 August 2013Last updated at 18:32 ET Passengers would undergo forces of gravity similar to an aeroplane, Mr Musk said US-based entrepreneur Elon Musk has unveiled his proposed near-supersonic "Hyperloop" transport concept to link Los Angeles and San Francisco. The SpaceX, Tesla and PayPal founder envisions using magnets and fans to shoot capsules floating on a cushion of air through a long tube. If the Hyperloop is ever built, a trip on it between the two California cities would last about 30 minutes, he said. But Mr Musk says he is currently too busy to develop the project himself. In a paper outlining the Hyperloop proposal, Mr Musk suggested the solar-powered system would be a faster, safer, less costly, and more efficient mode of transport between Los Angeles and San Francisco than the high-speed train currently under development. Continue reading the main story Elon Musk has given us his vision of 21st Century intercity travel. He's proposing a pod in a tube solution. '$20 a ticket'

LIFX: The Light Bulb Reinvented LIFX is the smartest light bulb you've ever experienced. It's a wifi-enabled, energy efficient, multi-colored bulb that you control with your iPhone or Android. LIFX gives you unprecedented control of your lights, reduces your energy costs, lasts up to 25 years and delivers an amazing range of experiences we think you’ll love. LIFX is incredibly easy to set-up. Simply replace your existing bulbs with LIFX smartbulbs, download and install our free app from the App Store or Google Play and you're good to go. We [Phil Bosua, Andrew Birt, Andy Gelme, John Bosua, Ben Hamey, Dave Evans and Guy King] have designed, redesigned and reimagined LIFX many times during the past six months, pouring countless hours into thinking about the user experience, the technical aspects of the project and how to deliver the world's smartest lightbulb to you at an affordable price point. LED lighting is the future of home and commercial lighting around the world. In addition they're unbelievably long-lasting.

Boat stabilizes with the help of internal waves. Robo-mate exoskeleton under development in Europe 11 September 2013Last updated at 08:42 ET The exoskeleton aims to make it safer for staff to handle heavy weights Efforts to develop an exoskeleton for the workplace are under way, backed by EU funds. Twelve research institutions from seven European countries are involved in the Robo-mate project, which hopes to test a robotic suit that can be worn by factory employees within three years. They say the machine could reduce the number of work-related injuries. One expert warned employers would need to be convinced the equipment would not pose safety issues of its own. Manufacturers including Italian carmaker Fiat and the French vehicle recycler Indra are working with the teams. The companies will suggest situations in which the tech could prove useful and have also said they would help test it. The EU has committed 4.5m euros (£6m; £3.8m) to the scheme. Heavy weights The project aims to address the fact that many manufacturing tasks are difficult to automate.