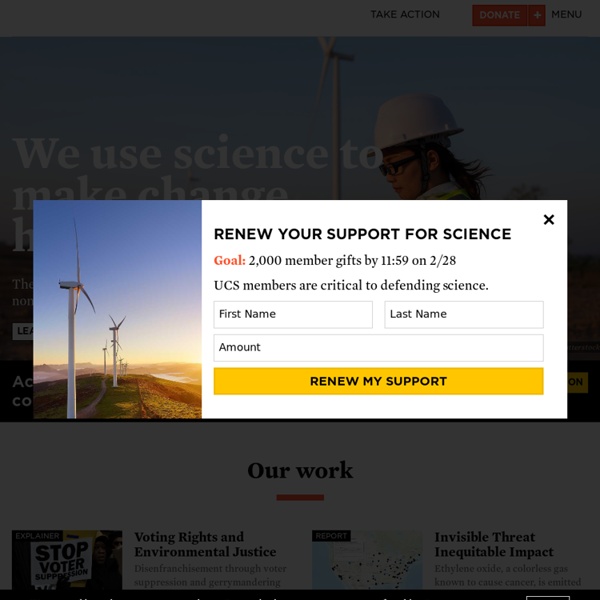 Union of Concerned Scientists Skip to main content Home About Us Publications News Center Policy Center In the wake of the nuclear crisis in Japan, we have seen first-hand the critical connection between water and nuclear power. In fact, power generation and water are intertwined—producing energy requires water, and providing that water uses energy. Both these processes face growing limits and problems, but a number of technologies offer strong opportunities to address water-related impacts. Water Use for Nuclear Power | The Energy-Water Collision(PDF)

Press Releases December 1999 - KENYA ADOPTS FRAMEWORK ENVIRONMENTAL MANAGEMENT AND COORDINATION ACT, 1999 Nairobi, 22 December 1999 - Klaus Toepfer, Executive Director of the United Nations Environment Programme (UNEP), today commended the Parliament and Government of Kenya on the approval of an Act which provides for the establishment of an appropriate legal and institutional framework for the management of the environment. The adoption of the new law is a milestone in the cooperation and collaboration between UNEP and the host country. The Act covers virtually all diverse environmental issues which require a holistic and coordinated approach towards its protection and preservation for the present generation without compromising the interests of the future generation to enjoy the same.

What is this thing called science? As a scientist, Evelyn Fox Keller hated experiments. Today a professor emerita in the History of Science at MIT, she started out her scientific career in theoretical physics before jumping to molecular biology. What got her was the trivial volatility inherent in experimentation. “Someone could brush by the thermostat on the water bath, and a months’ work would be down the drain. You didn’t have control over it.” Journals PLOS publishes seven peer-reviewed open-access journals. The journals vary in their selectivity and contain differing amounts of commentary articles from opinion leaders in a variety of scientific disciplines.The journals are editorially independent. They include PLOS ONE, which publishes all rigorous science across the full range of life and health sciences; the community journals (PLOS Genetics, PLOS Computational Biology, PLOS Pathogens, and PLOS Neglected Tropical Diseases); and our flagship journals, PLOS Medicine and PLOS Biology, highly selective journals publishing fewer than 10% of submissions along with a range of informative and influential non-research content.

Lists of environmental topics The natural environment, commonly referred to simply as the environment, is all living and non-living things that occur naturally on Earth or some part of it (e.g. the natural environment in a country). This includes complete ecological units that function as natural systems without massive human intervention, including all vegetation, animals, microorganisms, rocks, atmosphere and natural phenomena that occur within their boundaries. And it includes universal natural resources and physical phenomena that lack clear-cut boundaries, such as air, water, and climate, as well as energy, radiation, electric charge, and magnetism, not originating from human activity. General lists[edit] Physical Review X Does Research on Foundations of Quantum Mechanics Fit into PRX’s Scope? October 24, 2014 The editors and Bill Poirier from Texas Tech University spotlight an original, thought-provoking paper by Hall, Deckert, and Wiseman on foundations of quantum mechanics, Phys.

Publications - Journals by Subject Ocean Science (OS) is an international open access journal dedicated to the publication and discussion of research on all aspects of ocean science, experimental, theoretical and laboratory. OS covers the fields ocean physics, ocean chemistry, biological oceanography, air-sea interactions, ocean models (physical, chemical, biological and biochemical), coastal and shelf edge processes, and paleoceanography. Aims & Scope | Editorial Board | Online Library OS | Online Library OSD Convention on Biological Diversity (CBD) - National CHM for the Republic of Zambia Zambia has ratified more than twenty (20) Global Environmental Conventions that play an important role in influencing the country's policies, laws and actions so as to attain sustainable socio-economic development through the environment and natural resources management. In order for key players in environmental protection and natural resources management including the local communities to acquire basic knowledge and understanding on these conventions, there is need to disseminate issues related to different conventions to which Zambia is a party. Zambia lies at the heart of the Miombo Ecoregion and it is listed as the World Wide Fund (WWF) Global 2000 Ecoregion because of its high species richness. The Miombo Ecoregion supports important populations of fauna, particularly large mammals. Zambia is floristically diverse and has 8,500 plant species, of which about 54% are endemic.

[Official website] »  KNX  » What is KNX? KNX: Introduction More convenience, more safety, higher energy savings: The demand for building management systems is continuously increasing. Whether in a single-family house or in an office complex, the demand for comfort and versatility in the management of air-conditioning, lighting and access control systems is growing. At the same time, the efficient use of energy is becoming increasingly important.