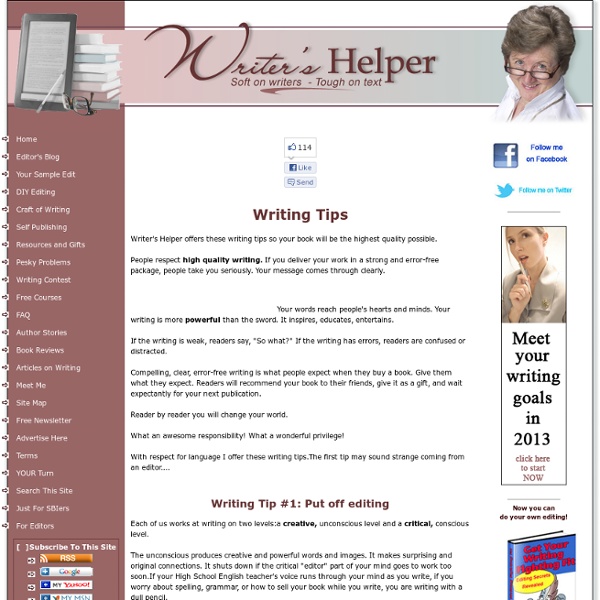 On other pages of this site, you can read many of my best writing tips. But this page is for you! Your tip can be about a grammar or spelling rule, the writing process, or how to get published. Anything you think another writer will appreciate belongs here. Click below to see writing tips from other visitors to this page... Spelling, Spelling, Spelling!!!!!! What to do for Writers' Block. Agony first, ecstasy second As you and your contributors have noted, reading is essential; lots of reading and extra reading in fact cannot be emphasized enough. Avoid time warp Keep notes of details and timeline separate from what you will write or need to write in your novel. Google Images for the win! Your writing - your interests One problem I often face is that I get bored half - way through. Cliches and Sterotypes We always roll our eyes at these. interesting characters Think of how you would you be if you were the character you describe. Backwards! Dream When writing you must think! enjoy it! 1.

ANCIENT EGYPT : The Ten Keys of Hermes Trismegistos I, King Pepi, am THOTH, the mightiest of the gods ... Pyramid Texts, § 1237. I, said he, am POIMANDRES, the Mind of the Sovereignty. Things Writers Forget When Writing Fight Scenes Recently, I attended VCON, a science fiction and fantasy conference in Surrey (part of Metro Vancouver) and attended a session called “Writing About Fighting.” The panel consisted of writers and experts who were disciplined in multiple martial arts, including authors Lorna Suzuki and T.G. Shepherd, and Devon Boorman, the swordmaster of Academie Duello in Vancouver. (I lost my program, so if you remember who else was there, please leave it in the comments, below) For me, this talk was so fascinating, it was worth the cost of admission to VCON. In fact, I spent days thinking about the topics discussed and tried to incorporate them into The Watcher Saga.

Story Values If there is anything in that stands out as the most useful bit of technique you can learn, this is it. Story Values. Everything else in this book is important or useful. Fictional Culture The way I build worlds is by collecting cool stuff from the history, myth and people around me. I blend these details with my own imagination, and create my own cultures. Culture is a vital part to realistic worldbuilding. Creating an Original Character By Maisha Foster-O'Neal You've heard the old maxim before... 'a character can make or break your story.' Okay, okay, so you want to write an interesting character. You've got some plot ideas, you know a little bit about your world, but now you need your characters. Trade in Ancient Egypt Trade has always been a vital aspect of any civilization whether at the local or international level. However many goods one has, whether as an individual, a community, or a country, there will always be something one lacks and will need to purchase through trade with another. Ancient Egypt was a country rich in many natural resources but still was not self-sufficient and so had to rely on trade for necessary goods and luxuries. Trade began in the Predynastic Period in Egypt (c. 6000 - c. 3150 BCE) and continued through Roman Egypt (30 BCE-646 CE). For most of its history, ancient Egypt's economy operated on a barter system without cash.

100 Little Ways You Can Dramatically Improve Your Writing it’s not only students at online colleges for creative writing who need good writing skills. Solid writing skills open up career-boosting opportunities for professional writers and for those with aspirations beyond their basic job description. Journalists, fiction writers, scientists, teachers, business professionals, law students, and other professionals can all get ahead by inspiring and influencing others with their writing. Ancient Egypt Military Egypt’s defensive advantages were not enough to stop the conquering Hyskos, who invaded at the end of the Middle Kingdom. The Egyptians learned from their defeat and reinvented their army, ushering in a new age of military glory. The Egyptian lands of the Archaic Period, Old Kingdom and Middle Kingdom were not devoid of armies or enemies, however. Nomads raided from the desert; Libyans attacked the Nile delta; and the Nubians threatened the southern border. The Pharaohs responded with force.

Scholarly publishing is broken. Here’s how to fix it The world of scholarly communication is broken. Giant, corporate publishers with racketeering business practices and profit margins that exceed Apple’s treat life-saving research as a private commodity to be sold at exorbitant profits. Only around 25 per cent of the global corpus of research knowledge is ‘open access’, or accessible to the public for free and without subscription, which is a real impediment to resolving major problems, such as the United Nations’ Sustainable Development Goals.

How to Break the Rules of Writing (& More) According to Bestselling YA author Ransom Riggs Like most first conversations and bad first drafts, my (WD’s Managing Editor Adrienne Crezo) interview with Ransom Riggs begins with a discussion about the weather. And not just any weather, either, but peculiar versions of standard precipitation: dust storms, cloudbursts, thundersnow and tornadoes. Of course, Riggs is experiencing none of those phenomena as he sits in the warmth of the never-ending summer of Los Angeles. “I hate to tell you what it’s like here right now,” he says. “No, I don’t. It’s gorgeous. For academics, what matters more: journal prestige or readership? With more than 30,000 academic journals now in circulation, academics can have a hard time figuring out where to submit their work for publication. The decision is made all the more difficult by the sky-high pressure of today’s academic environment—including working toward tenure and trying to secure funding, which can depend on a researcher’s publication record. So, what does a researcher prioritize? According to a new study posted on the bioRxiv preprint server, faculty members say they care most about whether the journal is read by the people they most want to reach—but they think their colleagues care most about journal prestige.

5 Tips on How to Write From the Opposite Gender Do you have male characters in your novel? Do you find it hard to really connect with them? They play video games, go outside, do sports, eat constantly, sleep all the time, and are major pranksters! What Are Different Types of Poems? Poems are collections of words that express an idea or emotion that often use imagery and metaphor. As you are studying literature, you will likely notice that poems come in many, many different forms. As you read and perhaps write your own poems, it is helpful to know the different kinds of poems. Types of Poems